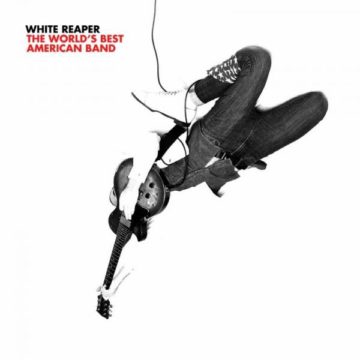 The World’s Best American Band is more than just the title of White Reaper’s latest release, it is also the band’s aspirational credo. While calling a band the world’s best at anything might seem a bit lofty, it isn’t entirely unreasonable. I mean, White Reaper does hail from Louisville, Kentucky, so they are American, and with the amount of fandom and acclaim they’ve garnered since 2014 they are bound to be the best at something, right?

The World’s Best American Band maintains White Reaper’s distortion embracing garage punk sound, while still showing growth from the band. Within the album’s ten tracks are some exceptionally enticing melodies, grooving bass lines, and some delightfully catchy lyrics. On their follow-up to 2015’s White Reaper Does It Again, the Kentucky boys sound more refined, sophisticated, and intentioned than ever before.

On the album’s lead single, “Judy French,” crunchy guitars meld nicely with Tony Esposito’s vocals to create a truly fun song that is sure to be at home on someone’s high school summer mixtape. A lot of White Reaper’s songs would fit nicely within a teen summer mixtape that is paired with button encrusted denim jackets, muscle cars, and Surge Soda.

White Reaper’s brand of power pop is quite reminiscent of Thin Lizzy, Kiss, The Ramones, and other acts who managed to turn hard-hitting straightforward rock into an airwave dominating sensation. On tracks like “The Stack” this influence becomes exceptionally clear as roaring guitar riffs intermingle with raucous drums and hollered vocals to create a somewhat nostalgic bash of audio. This style is analogous to other Polyvinyl Records roster members like Japandroids or Beach Slang who also create songs that are almost begging to be blasted from a nondescript suburban garage.

While The World’s Best American Band doesn’t offer anything terribly revolutionary from White Reaper, it definitely gives us our best look at the band to date. With bandmates Esposito, Ryan Hater, Nick Wilkerson, and Sam Wilkerson doing what they do best and Kevin Ratterman (My Morning Jacket, Young Widows) producing, The World’s Best American Band is as straightforward and in your face, as rock and roll can be.

I am an Edmonton based musicophile and photographer who loves experiencing music whether it's live or on my turntable. I play seven instruments and go to a lot of concerts.
RELATED ARTICLES
album reviewsanother daypolyvinyl records
6.0