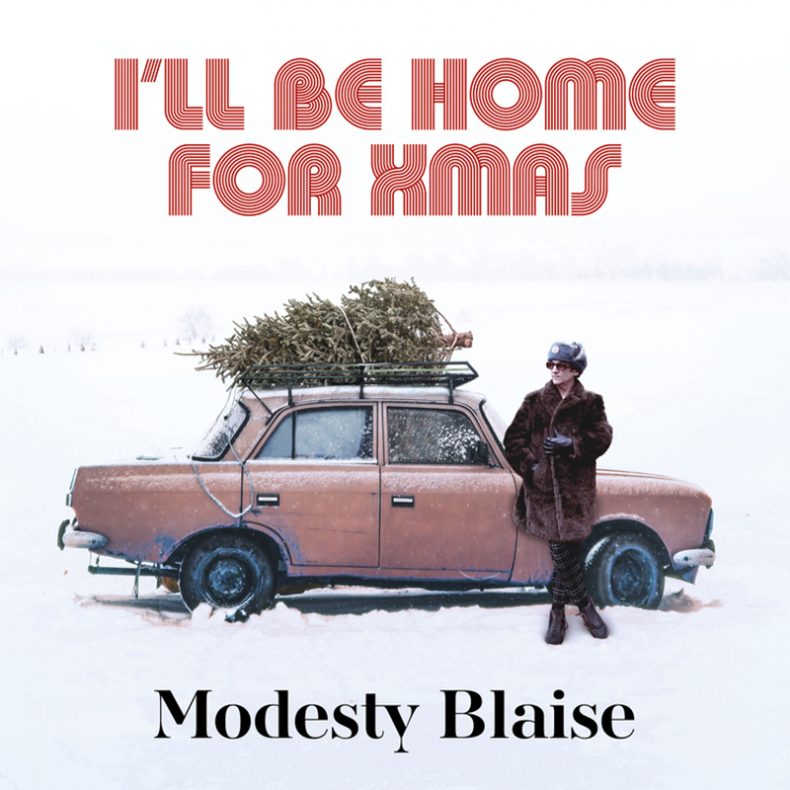 With all the whacky (yet thoroughly enjoyable) disco-inspired electro pop gifted to us earlier this year (February to be exactly by Modesty Blaise, the Bristol-based collective have decided to send this year off with a big bang, once again dishing up a smorgasbord of colorful sounds. Their new single “I’ll Be Home For Xmas”, out on November 26, is also the first holiday offering of this nature.

Produced by Dorothy Collins with support from cinematographer M.M. Van Dyke, , the whole Modesty crew – now spread out in various locales – have come together, especially to bring us this bouncy festive tune. You’ll even see the walls of Bristol’s famous Factory Studios among the sites where this video was shot.

While there’s a slight Wham! meets Frankie Valli / Annette Funicello vibe happening in this song, there’s also something here that lends to the imagine of Davy Jones singing this on an episode of The Monkees, not surprising given the number of times the band’s output has been compared to that of Mike Nesmith.

Modesty Blaise have always wanted to make a Xmas record. Steeped in the traditions of the Spector/Wizzard school of huge productions, recording started in July 2021 at the height of summer, as all good Xmas records should. Many instruments and sessions later, this single came to fruition in late October as days grew shorter. Now it’s ready for you. Are you bringing the snow?

This release follows up The Modesty Blaise LP (February 2021), their third release via German label From Lo-Fi to Disco! and first long-player in 20 years, having released their head-turning Melancholia LP in 2001.

“We’re not just making a tune for 2021, this is a conscious decision to make a timeless tune. All great Xmas records are timeless, from Wizzard to The Wombles, we play them every year. They do not age; they invoke Proustian memories of festive seasons past. We want to be part of your Xmas – so we’re coming home,” says Jonny Collins.

“I always thought that nothing says Xmas quite like 2 drum kits, a massive tune and a baritone sax. We think this is the best Xmas record that you’ll have heard this side of the millennium, we’ve tried to make something timeless and we hope you agree. We want to be part of your festive season this year and in years to come.”

Modesty Blaise have been around since 1993 in various guises. In that year, they recorded their debut single “Christina Terrace” with Edwyn Collins at the helm, garnering them immediate success with a live appearance on ITV and inclusion among many end-of-year top music rankings. This acclaim however was not enough to quell the kind of internecine warfare that Modesty Blaise have become famous for. Line-up changes and deteriorating personal circumstances delved into an all-too-familiar spiral and it would be years until a full reformation.

On November 26, ‘I’ll Be Home For Xmas’ will be released digitally via From Lo-Fi to Disco! with distribution by Broken Silence. It will be available everywhere as a digital download, including Spotify, Apple Music and Bandcamp.

Since we are here exploring Modesty Blaise, you really should catch their latest self-titled album:

And their more serious audio-visual endeavours:

SPILL NEW MUSIC strives to keep our readers up-to-date with new releases by your favourite artists, keeping you informed of new album, single, and video releases. Stay tuned -- who knows, you might just discover your new favourite band.
RELATED ARTICLES
and the lights went out all over townfrom lo-fi to discomodesty blaise

SPILL VIDEO PREMIERE: MODESTY BLAISE – “AND THE LIGHTS WENT OUT ALL OVER TOWN”

by SPILL NEW MUSIC on April 27, 2021
MODESTY BLAISE – “AND THE LIGHTS WENT OUT ALL OVER TOWN” A SPILL EXCLUSIVE VIDEO PREMIERE If you were to soundtrack the episodes of ‘The [...]