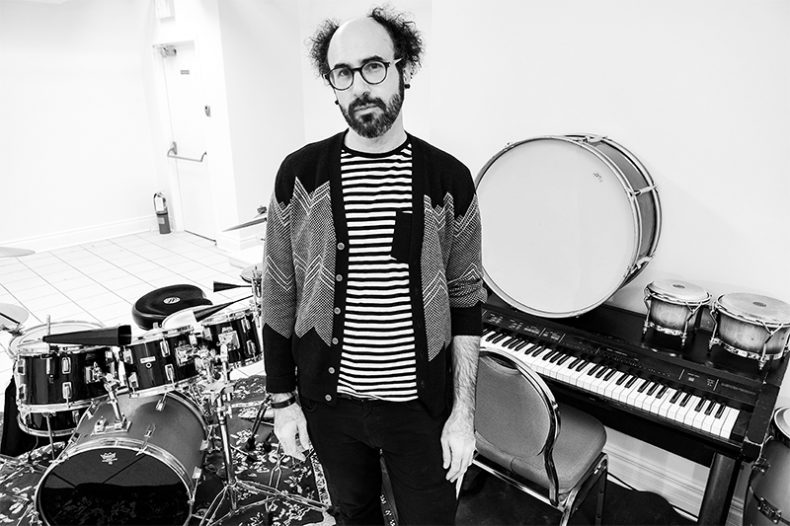 DATABASE OF THE DEAD

A CONVERSATION WITH BENJAMIN HACKMAN OF THE HOLY GASP

In the span of a few years, a number of people close to The Holy Gasp leader Benjamin Hackman died. His father died of a heart attack, shortly afterwards his therapist died of pancreatic cancer, then his best friend hanged himself. His brother-in-law overdosed. And his grandmother, “God bless her,” Hackman states, died of “good ol’ fashioned old age.” It was a few years which saw the band create the dizzying The Love Songs of Oedipus Rex, an album spawned from Hackman’s experiences. A period that “provoked an alienating experience,” as Hackman says.

On July 1, at The Historic Kiever Synagogue at Kensington Market, Toronto, Hackman stood on a riser. Surrounding him was a piano, a bass drum, and a snare drum; surrounding them were 10 vocalists, one whom is deaf, and translated in American Sign Language. At approximately 9:03 PM, at the centre of the room, Hackman read a scroll of names of people who died, accompanied by a looping melody, and chanted the words, “these are the people who died, and we alone have survived to say that these are the people who died” over and over.

The project, called Grief, was livestreamed over Facebook, YouTube, and The Holy Gasp’s Grief website. A page dubbed the “Database Of The Dead” is open to anyone to submit a name of a loved one to the scroll. Inscribed by hand by artist Rochelle Rubenstein, Hackman read every single name.

The long list of names ranged from beloved parents, to best friends, to children lost. Most of them included an “About The Dead” section, sharing who their loved one was, and what they mean to them.  “I’ve read every entry,” he says. “I get a little ding in my inbox every time one is entered. I read them right away.”

Grief is, as Hackman puts it, a unified method for grief. “I set out to relieve myself of suffering by trying to communicate my own grief through art. It struck me because our culture was lacking in a major way, of any unified method for grief. And not only to the culture of not having a good sense of how to grieve, they didn’t seem to have a strong sense of how to support other people throughout their grief, so I wanted to create an opportunity where people could have those needs met.

“I was interested in cultures that seemed to have rituals around grief, so I was interested in ritual as a work of psycho-drama, and interested in ritual from an aesthetic perspective, and I borrowed from traditions and rituals and psycho-drama, and I attempted to fabricate something that felt like a ritual, even though it is not one, but one that can function as one. Ideas of constant repetition, ideas of fulfilling or occupying a night, sunset to sunrise, these are things that symbolically feel rather ritual, and I thought that they might have that feeling for other people as well.” 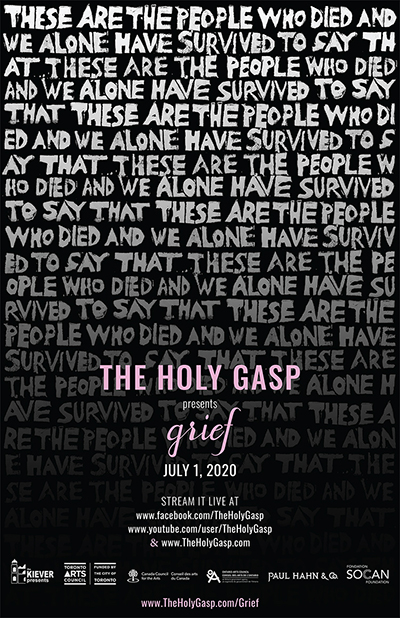 Although Hackman is the composer-of-residence at the synagogue, no specific religion was a main source of inspiration. “I am of course influenced by Judaism, just by the fact I was raised in this way, and I happen to be at Kiever Synagogue, so of course there’s an influence on me. But in a huge way, one of the central facets of designing Grief was to create something that did not belong to any one culture, or tradition, or religion. I advocate strongly that death is the great unifier of all humanity.”

That inclusivity would be a main point, as both the Database Of The Dead and Grief itself were made easy to access for differently-abled people. For the sign language performance, the chant that would be repeated by the vocalists would be amended from “say” to “sign.” “We made that decision to speak forward to the deaf community, a non-audible experience was created. If you can or can’t hear me, you’re still going to die.”

“Defining the concept, I wasn’t thinking whatsoever about a global pandemic, or the rise of the Black Lives Matter movement. It just became far more topical than expected. We adapted for livestream because we couldn’t meet in person, so some of this is creativity, and some of this is responding to the context of the world we’re living in.”

But the tragedy of these events strikes emotion in Hackman. While every name resonates with him, some have managed to hit close to home. “The ones that touch me the most, are black teens that have been murdered by the police. It really chokes me up when I read about some of them being musicians. It just breaks my heart because I think about how important my instruments were to me when I was a 17-year-old kid. If I were to die today, I’d be remembered for such different things than if I were to have died at 17, so the youths that were murdered by the police, it brings out a lot of emotion in me. But a dead person can very quickly lose their character if you aren’t directly grieving them. That these people should not be remembered as ‘somebody who was murdered” because that is an incredible disservice to their lives.”

“These people meant something to a lot of people, these people had contributions to the world, they had talent, they had insight, and could have and should have had the opportunity to make a bigger mark on this world, and that was deprived of them. So, the effort to attempt to remember 17 years of a young person’s life, to remember what a wonderful saxophone player they were, or to remember all the kids who they babysat adored her, that’s important.”

For a band once referred to as “oddballs,” or an artist who once prided himself as inserting a little comedy into every performance, Grief exists as a raw, somber offering for a society afraid of death. It’s a performance Hackman sees as a way to process everyone he lost.

On the night of July 1, purported by the site’s FAQ page, 25,000 names were in the database. By sunrise, Hackman honoured each one.

King Dawit considers himself the Psychedelic Cowboy. Raised on The Beatles, Queen, The Rolling Stones, and Crosby, Stills, Nash, & Young, you will never find Dawit listening to the same thing two days in a row, whether it be '70s progressive rock or late '60s Baroque pop. Dawit is also a Toronto-based writer, filmmaker, and music producer. Among his favourite writers are Hunter S. Thompson, Terry Southern and Lester Bangs.
RELATED ARTICLES
featuresthe holy gasp