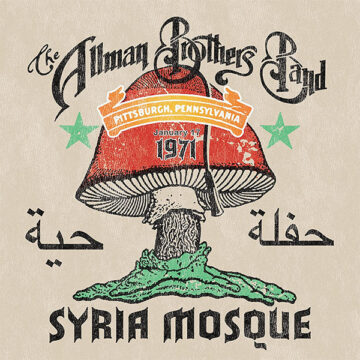 With their live shows as revered as their most classic studio albums, it is no surprise that we are still receiving unreleased live performances from The Allman Brothers Band, nearly a decade after their final concert. While widely circulated as a bootleg recording, the famed jam band is officially releasing Syria Mosque: Pittsburgh, Pa January 17, 1971.

Opening with the shuffling blues of “Statesboro Blues”, the energy of The Allman Brothers Band in their most classic era is felt in full effect. The chemistry between the musicians, led by brothers Duane and Gregg, is simply incredible – with the former laying down an absolute ripper of an electric slide soli. The original line up of Duane Allman, Gregg Allman, Dickey Betts, Berry Oakley, Butch Trucks and Jaimoe – best known for At Fillmore East – was untouchable, and Syria Mosque reflects this.

While not the greatest quality of sound – the record was recorded straight from the venue’s board and has since been remastered – Syria Mosque is a snapshot of The Allman Brothers Band at their peak. From the lengthy instrumental “In Memory Of Elizabeth Reed” – an essential cut from the band that demonstrates a refined sense of restraint few musicians, let along young artists, have as the song builds organically until eruption – to the harmonized melodies of “Midnight Rider”, The Allman Brothers Band demonstrated all their worth on Syria Mosque. Setting the standard for jam and blues bands in 1971 alike, both “You Don’t Love Me” and “Whipping Post” close for the performance, marking Syria Mosque as yet another strong example of The Allman Brothers Band’s musicality in a live setting.

Among the absolutely vast collection of official and unofficial live records from this era of The Allman Brothers Band, and their entire career for that matter, Syria Mosque can stand among some of the greatest live displays from this acclaimed band. On one hand, Syria Mosque is a timeless collection of material of The Allman Brothers Band, and Duane, at their prime; however, the album itself does not quite reach the summit of the legendary At Fillmore East and the deluxe reissues we’ve seen since. That said, for lifelong fans, Syria Mosque: Pittsburgh, Pa January 17, 1971 is an absolute must.