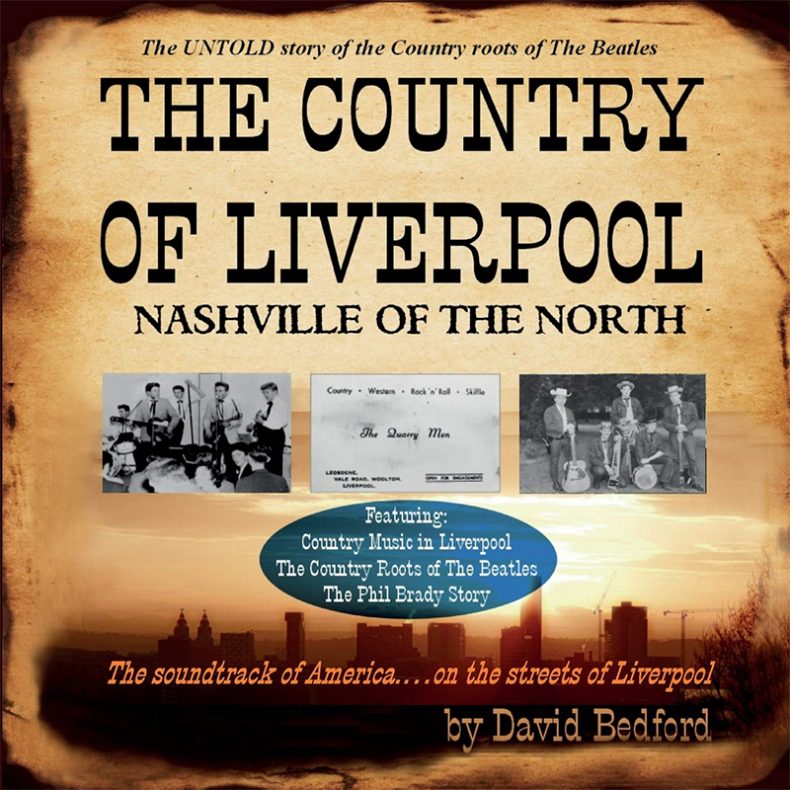 DAVID BEDFORD – THE COUNTRY OF LIVERPOOL: NASHVILLE OF THE NORTH

In 1965, The Beatles recorded “Act Naturally”, with Ringo Starr on lead vocals, for the Help! album. The song was even released as a B-side in North America with “Yesterday” on the A-side. What made the song an odd choice by the rock band was that  “Act Naturally” was originally a country and western hit for Buck Owens. Although their choice covering a country and western hit was somewhat of a surprise in 1965, it really shouldn’t have been. David Bedford, very thoroughly, outlines the Beatles connection with country music in his book The Country Of Liverpool — Nashville Of The North, and the impact country music had on Liverpool in general.

Renowned Beatles scholar and expert, Liverpool-born Bedford, carefully connects the dots. He provides a brief history of country music in general, and how it found its way into Liverpool and all of the U.K. And this connection to America’s west goes way back. He even writes about Buffalo Bill appearing in Liverpool in 1891, Gene Autry making his way through the U.K. in 1939 and Roy Rogers, his wife Dale Evans, and his horse Trigger landing in Liverpool in 1954, not to mention the ‘Cunard Yanks” who worked on the ships coming and going into the Liverpool docks who brought a lot of American singles to the shores of Liverpool. As it was a port city, the people who worked on the Cunard Ship Lines often brought American music to a lot of young people who would go on to form bands.

He ties the records from the ‘Cunard Yanks’ with the impact of the Irish migration to Liverpool and their music. All of this would have an impact on the people of Liverpool, including The Beatles. Of course, The Beatles were also influenced by rockabilly artists such as Carl Perkins. This is the beauty of the book, connecting the dots and have a clear understanding that country music had a significant impact from a very early stage,

Bedford also writes about Liverpool country artists, such as Phil Brady, which not only adds to the narrative, but makes for fascinating reading. One of Bedford’s many talents is that of a storyteller. He takes a great deal of well-researched information and presents in a readable fashion. Once started, it is difficult to put the book down.

Bedford also extends the impact of country music through to current day. He outlines periods in The Beatles career and solo careers where one clearly sees the influence of this genre of music. From Starr’s severely underrated album Beaucoups of Blues album and his rerecording of “Act Naturally” with Buck Owens, to McCartney’s “Sally G” and his recordings with Carl Perkins and Johnny Cash. Again, he brings it all together in this brilliant book.

Purchase The Country Of Liverpool: Nashville Of The North Via

Born and raised in Whitby, Aaron discovered music through his love of The Beatles. This led to a career in radio, writing for various publications, and ultimately a radio show about The Beatles (Beatles Universe), which ran for over four years. When not immersed in music, Aaron enjoys spending time with the loves of his life -- his wife Andrea, and daughters Emily and Linda (all of whom have an intense love of music too).
RELATED ARTICLES
booksthe beatles