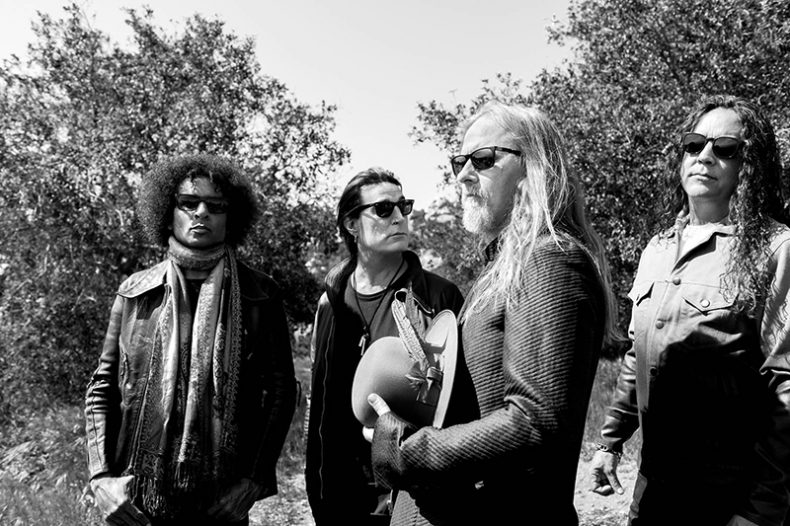 Against all odds, Alice In Chains have not only survived, but they’ve thrived – especially in the last two years – since forming over three decades ago. It is because of this that Seattle’s Museum Of Pop Culture is honouring the grunge innovators with The 2020 Founders Award, an award that has previously celebrated the work of the likes of Jimmy Page, Buddy Guy, Carlos Santana, and Robbie Robertson, among others. In style of 2020, the virtual ceremony will feature a string of pre-recorded live performances from an incredibly stacked line up of artists – including Metallica, Dave Navarro, Billy Corgan, Dallas Green, and Corey Taylor, along with members of Nirvana, Foo Fighters, Soundgarden, and Pearl Jam – paying tribute to one of the greatest bands of the ‘90s..

Playing like a documentary, MoPOP’s celebration of Alice In Chains opens with the band, in masks, hanging out on the Seattle rail-transit system, as they reminisce on old times and discuss the importance of Jimi Hendrix – his contributions to music and the influence he played on the band – as the Museum of Pop Culture was created in memory of the late, and, potentially, the very first, Seattle musical icon (the love for Hendrix runs deep throughout this with the band further paying homage to him behind the scenes in between performances). The concert truly kicks off with an acoustic performance of “Your Decision” from Alice In Chains – a performance that is as musically stunning as it is visually. With a sense of humor, guitarist and vocalist Jerry Cantrell even reprises his role as Nona Weisbaum from 1995’s mockumentary, The Nona Tapes, to further introduce the band. In all regards, this is a prestigious event that the band is clearly taken aback by, but they’re still refusing to take themselves too seriously as they walk around the museum cracking jokes. 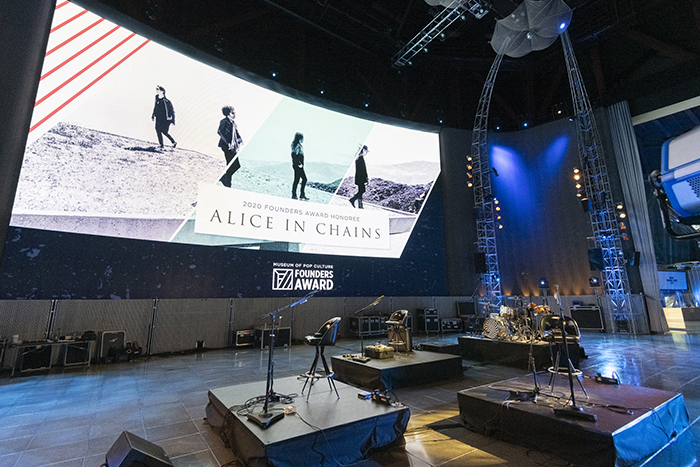 The concert – again in style of a documentary – is divided into performances from different artists paying tribute alongside artists and industry insiders speaking on the importance of Alice In Chains (most notably, Eddie Vedder, Sammy Hagar, Tom Morello, and, most excellently, Robert Downey Jr.). Naturally, the ceremony also featured Alice In Chains performing two songs, recorded just for this occasion. Edited all together, the Founders Award ceremony makes for an incredibly entertaining event and a fitting tribute to Alice In Chains. In a refreshing turn of events, there was not a single weak cover from any of the artists paying tribute; at their worst, they were simply good. While many were recorded in various studios or via living room jams and zoom chats (such is 2020), a number were filmed and recorded within different exhibits of the museum which proved to be an incredible visual experience, often rivalling that of a music video.

The list of contributing artists was expertly curated, with up-and-coming artists, cult icons, and legends all paying homage to Alice In Chains. Of the expansive list, some, however, stood out as exceptional. The first being Heart’s Ann Wilson and here dark, brooding, and emotionally heavy cover of “Rooster” that would have sent shivers down your spine. Dave Navarro and Chris Chaney (Jane’s Addiction), along with Taylor Hawkins (Foo Fighters) and Corey Taylor (Slipknot, Stone Sour) brought the hard-hitting rock on a faithful rendition of “Man In The Box” while Dallas Green delivered an emotive and acoustic “Rain When I Die” that was reminiscent of his own work with City And Colour. Furthermore, a reunited Soundgarden – Matt Cameron, Kim Thayil (who guested on a number of performances), and Ben Sheppard were simply billed as “Members Of Soundgarden” – along with Pearl Jam’s Mike McCready jammed on “Angry Chair” where both McCready and Thayil took the prize for the best guitar solos of the night. Thayil also returned with Nirvana bassist Krist Novoselic – along with the stellar vocal duo of Jillian Raye and Jennifer Johnson – for a heavy cover of “Drone” where Thayil’s fantastic tones and solos were matched with jaw dropping vocal harmonies. While Alice In Chains is often credited with influencing modern hard rock, metal, and even acoustic rock, it was LA’s funk/punk/rock/ska pioneers Fishbone who may have stolen the show, however, with their groovy and explosive cover of “Them Bones” that was driven by punchy horns, dissonant vocal harmonies, and a rock meets R&B sensibility that was incredibly original. Is it too much to ask for a Fishbone revival in 2021? 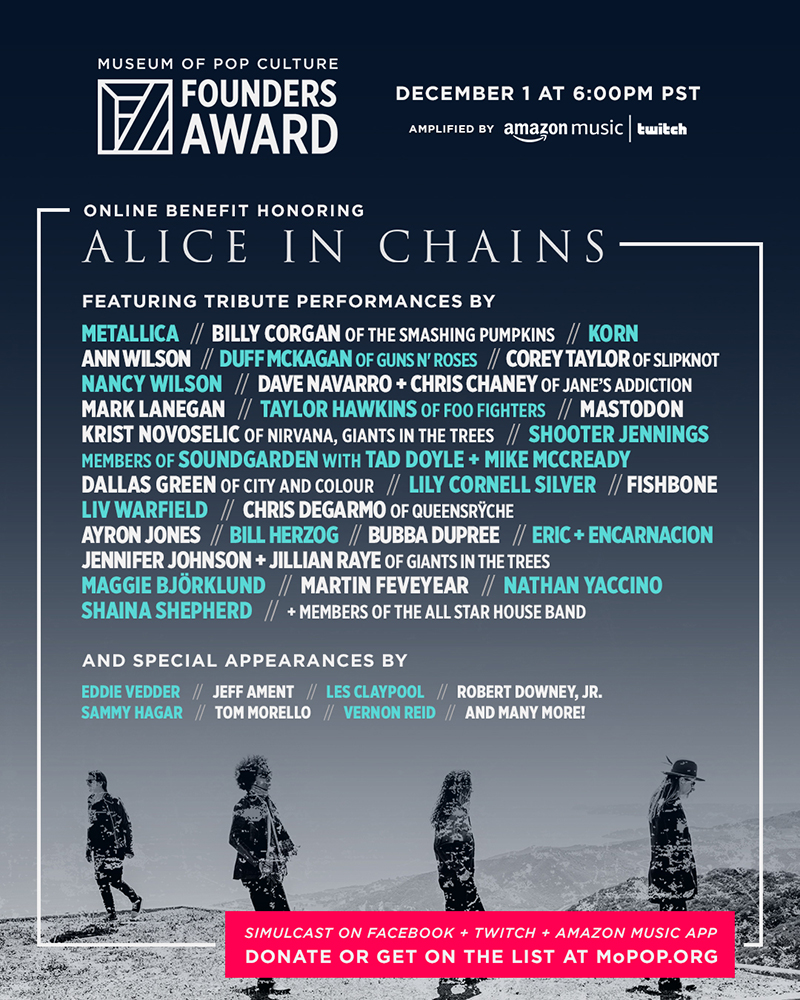 Equally as important as celebrating Alice In Chains, is the reminder of the heritage that the Museum of Pop Culture preserves and how it has integrated itself as an essential part of the greater Seattle community as a non-profit organization to foster the arts in younger generations and for lower income families. Urging people to donate to support them during the pandemic, it is important to remember that institutions such as MoPOP – and others across the globe for that matter – which strive to educate and create opportunities for all are something to be treasured. It is within these institutions that culture is created and dispersed; it is within these walls where creativity is fostered, passion is encouraged, and, ultimately, cities are given a sense of colour to the urban landscape of daily life.

While only performing two songs, the opening “Your Decision” and the concert closer, “No Excuses”, Alice In Chains shined bright through the lasting legacy of their artistry as heard through the musical voices of their friends, contemporaries, and subsequent generation of musicians they influenced . That is not to say however, that their acoustic performances of these deep cuts were nothing short of special in its own right. It was in this pair of songs that the soul of the band was laid bare: the arrangements delicate, the vocal harmonies lush, and the songwriting exceptional. While an extended performance from Alice In Chains – perhaps further featuring other guests – would have been a welcomed addition, it was unnecessary. By the end of the two and a half hour ceremony, the point of the celebration was abundantly clear: the music of Alice In Chains has taken on an incredibly grand life of its own beyond the band, and that very well could be the greatest tribute to the lasting legacy and influence of Alice In Chains.

A passion for music has always been a part of Gerrod’s life. As a young boy, he was raised on a steady diet of the music from The Chili Peppers, Aerosmith, The Stones, Prince, and others from his mum. Raised in the GTA, Gerrod continued to foster his love for music by attending a wide range of concerts and learning the drums. His unapologetic passion for music has no bounds and has spread to a wide variety of styles, whether it be the 90’s rock that sound tracked his teenage years, the jazz he studied in university, or his newfound love for hip-hop. He recently received his bachelors in music and education from York University and is passionate about writing and reviewing good (and less than good) music. Gerrod is also the drummer and songwriter for a Toronto based rock & roll band, One In The Chamber.
RELATED ARTICLES
alice in chainslive reviewSeattle