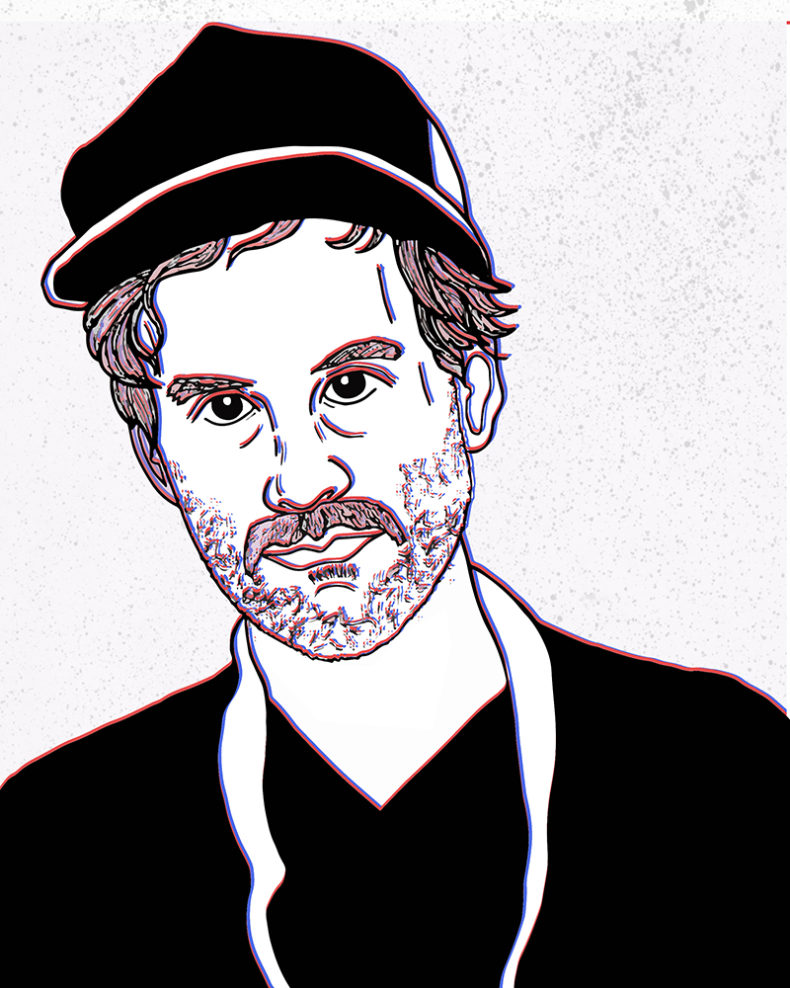 Grounders’ home base is an overflowing garage in Toronto’s West End, but the roots of their new album Coffee & Jam stretch much farther west. Since releasing their debut self-titled LP in 2015, the band – Andrew Davis (vocals and guitar), Daniel Busheikin (keyboards), Mike Searle (Bass) and Evan Lewis (guitar) and Kurt Marcoux (the newly-recruited drummer) – have logged countless hours on the road, touring throughout Canada and the U.S. Somewhere down the line of empty motels, sand dunes and vast, dry American landscapes, their dreamy psych pop turned dark and unsettling.

It started in their trusty Grounders van, where a book of CDs provided the soundtrack to their journey. Each member would bring a few discs as their offering and try to get the others into them. They soaked up records like the Velvet Underground’s VU, Kraftwerk’s Computer World, and a New York noise compilation that blew everyone’s mind. At a tour stop in Calgary for the band’s appearance at Sled Island festival in 2015, everyone came over to Busheikin’s parents’ house. “Every morning we’d get up, make eggs, drink coffee, then fuck around in the basement,” says lead singer Andrew Davis.

Later that fall, the band spent a rare week off from touring in a small cabin near Sacramento, California that they found on Airbnb. The setting felt post-apocalyptic, covered by drought-starved dead grass, but it marked another flurry of creativity, writing and demoing early versions of songs that would later end up on Coffee & Jam. The influences they absorbed started coming out in wonky funhouse mirrors of their surroundings – a gritty but gorgeous, stripped-down version of Americana that distorts bands like The Cure, The Talking Heads and The Stranglers into a jagged post-punk odyssey. At one point the power went out for the whole block and the band assumed they had taken it down themselves.

Grounders continued writing and demoing in their garage rehearsal space/gear palace, before hitting Union Sound studio in 2016, where they recorded Coffee & Jam with Ian Gomes. Working quickly, with few effects or studio tricks, the album was produced by “whoever was in the room.” It was mixed by the elusive Dave Newfeld (Broken Social Scene, Weaves) and mastered by Gavin Gardiner (The Wooden Sky).

“The Judge, The Cook and The Clown” squeezes the sticky hooks of The Cars through layers of paranoia, while “Mickey Can’t Move” skranks a glittery New Wave groove along a dirty runway. The album takes its title from a lyric in “Bringin’ It In,” a spiky, surreal bounce that soaks diner grease in penthouse chanel. The songs teeter on the edge, like they might fall apart at any moment (but never do).

Grounders have shared the stage with Alvvays, Born Ruffians, Nap Eyes, Diet Cig, Widowspeak and more. They’ve played festivals including SXSW, CMJ, NXNE, CMW, Sled Island, Rifflandia, Tomorrow Never Knows, and others. Their music has appeared on the soundtrack of the homoerotic indie game Rinse And Repeat and has been played for the studio audience of The Price Is Right. Drew Carey is a fan.

Daniel is an illustrator/graphic designer based out of Austin Texas. He graduated from Pratt Institute with a Bachelors degree in Illustration and an Associates degree in Graphic Design. Daniel started his career in graphic design in the world of online casinos. Since then he’s worked with various clients from around the United States and Canada including but not limited to NHL, Subway, Paraco Propane, Pitney Bowes, Xerox, Conduent, Nestle Waters, The Spill Magazine, Stamford CT’s DSSD, Beechnut Baby Foods, Elizabeth Arden and much more.
RELATED ARTICLES
daniel adamsportraitstoronto