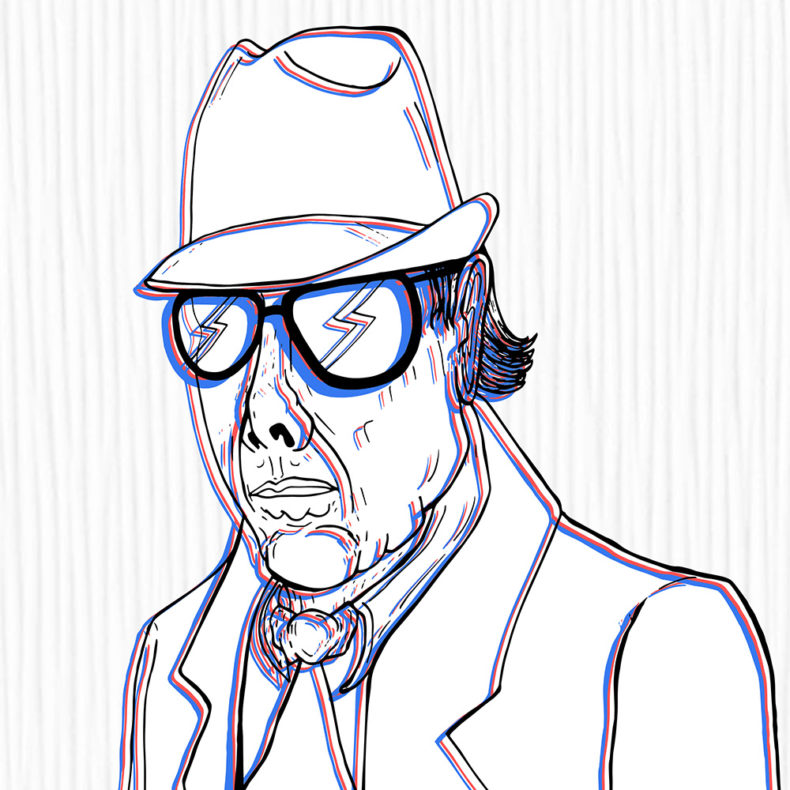 Equal parts blue-eyed soul shouter and wild-eyed poet-sorcerer, Van Morrison is among popular music’s true innovators, a restless seeker whose incantatory vocals and alchemical fusion of R&B, jazz, blues, and Celtic folk produced perhaps the most spiritually transcendent body of work in the rock & roll canon. Subject only to the whims of his own muse, his recordings cover extraordinary stylistic ground yet retain a consistency and purity virtually unmatched among his contemporaries, connected by the mythic power of his singular musical vision and his incendiary vocal delivery: spiraling repetitions of wails and whispers that bypass the confines of language to articulate emotional truths far beyond the scope of literal meaning.

George Ivan Morrison was born in Belfast, Northern Ireland, on August 31, 1945; his mother was a singer, while his father ardently collected classic American jazz and blues recordings. At 15, he quit school to join the local R&B band the Monarchs, touring military bases throughout Europe before returning home to form his own group, Them. Boasting a fiery, gritty sound heavily influenced by Morrison heroes like Howlin’ Wolf, Brownie McGhee, Sonny Boy Williamson, and Little Walter, Them quickly earned a devout local following and in late 1964 recorded their debut single, “Don’t Start Crying Now.” The follow-up, an electrifying reading of Big Joe Williams’ “Baby Please Don’t Go,” cracked the U.K. Top Ten in early 1965. Though not a major hit upon its original release, Them’s Morrison-penned “Gloria” endures among the true classics of the rock pantheon, covered by everyone from the Doors to Patti Smith. Lineup changes plagued the band throughout its lifespan, however, and at the insistence of producer Bert Berns, over time session musicians increasingly assumed the lion’s share of recording duties. A frustrated Morrison finally left Them following a 1966 tour of the U.S., quitting the music business and returning to Belfast.

Blowin’ Your Mind! After Berns relocated to New York City to form Bang Records, he convinced Morrison to travel stateside and record as a solo artist; the sessions produced arguably his most familiar hit, the jubilant “Brown-Eyed Girl” (originally titled “Brown-Skinned Girl”), a Top Ten smash in the summer of 1967. By contrast, however, the resulting album, Blowin’ Your Mind, was a bleak, bluesy effort highlighted by the harrowing “T.B. Sheets.” The sessions were originally intended to produce only material for singles, so when Berns released the LP against Morrison’s wishes, he again retreated home to Ireland while the album tanked on the charts. Berns suffered a fatal heart attack in late 1967, which freed Morrison of his contractual obligations and energized him to start working on new material.

Astral Weeks His first album for new label Warner Bros., 1968’s Astral Weeks, remains not only Morrison’s masterpiece, but one of the greatest records ever made. A haunting, deeply personal collection of impressionistic folk-styled epics recorded by an all-star jazz backing unit including bassist Richard Davis and drummer Connie Kay, its poetic complexity earned critical raves but made only a minimal commercial impact. The follow-up, 1970’s Moondance, was every bit as brilliant; buoyant and optimistic where Astral Weeks had been dark and anguished, it cracked the Top 40, generating the perennials “Caravan” and “Into the Mystic.”

His Band and the Street Choir The first half of the ’70s was the most fertile creative period of Morrison’s career. From Moondance onward, his records reflected an increasingly celebratory and profoundly mystical outlook spurred on in large part by his marriage to wife Janet Planet and the couple’s relocation to California. After His Band and the Street Choir yielded his biggest chart hit, “Domino,” Morrison released 1971’s Tupelo Honey, a lovely, pastoral meditation on wedded bliss highlighted by the single “Wild Night.” In the wake of the following year’s stirring Saint Dominic’s Preview, he formed the Caledonia Soul Orchestra, featured both on the studio effort Hard Nose the Highway and on the excellent live set It’s Too Late to Stop Now. However, in 1973 he not only dissolved the group but also divorced Planet and moved back to Belfast. The stunning 1974 LP Veedon Fleece chronicled Morrison’s emotional turmoil; he then remained silent for three years, reportedly working on a number of aborted projects but releasing nothing until 1977’s aptly titled A Period of Transition.

Wavelength Plagued for some time by chronic stage fright, Morrison mounted his first tour in close to five years in support of 1978’s Wavelength; his performances became more and more erratic, however, and during a 1979 date at New York’s Palladium, he even stalked off-stage in mid-set and did not return. Into the Music, released later that year, evoked a more conventionally spiritual perspective than before, a pattern continued on successive outings for years to come. Albums like 1983’s Inarticulate Speech of the Heart, 1985’s A Sense of Wonder, and 1986’s No Guru, No Method, No Teacher are all largely cut from the same cloth, employing serenely beautiful musical backdrops to explore themes of faith and healing. For 1988’s Irish Heartbeat, however, Morrison teamed with another of his homeland’s musical institutions, the famed Chieftains, for a collection of traditional folk songs.

Avalon Sunset Meanwhile, Avalon Sunset heralded a commercial rebirth of sorts in 1989. While “Whenever God Shines His Light,” a duet with Cliff Richard, became Morrison’s first U.K. Top 20 hit in over two decades, the gorgeous “Have I Told You Lately That I Love You” emerged as something of a contemporary standard, with a Rod Stewart cover cracking the U.S. Top Five in 1993. Further proof of Morrison’s renewed popularity arrived with the 1990 release of Mercury’s best-of package; far and away the best-selling album of his career, it introduced the singer to a new generation of fans. A new studio record, Enlightenment, appeared that same year, followed in 1991 by the ambitious double set Hymns to the Silence, widely hailed as his most impressive outing in years.

Too Long in Exile Following the uniformity of his ’80s work, the remainder of the decade proved impressively eclectic: 1993’s Too Long in Exile returned Morrison to his musical roots with covers of blues and R&B classics, while on 1995’s Days Like This he teamed with daughter Shana for a duet on “You Don’t Know Me.” For the Verve label, he cut 1996’s How Long Has This Been Going On, a traditional jazz record co-credited to longtime pianist Georgie Fame, and for the follow-up, Tell Me Something: The Songs of Mose Allison, he worked with guest of honor Allison himself. Morrison continued balancing the past and the future in the years to follow, alternating between new studio albums (1997’s The Healing Game, 1999’s Back on Top) and collections of rare and live material (1998’s The Philosopher’s Stone and 2000’s The Skiffle Sessions and You Win Again).

Down the Road It wasn’t until 2002 that an album of new material surfaced, but in May his long-anticipated Down the Road was released. Three years later, Morrison issued Magic Time. Pay the Devil, a country-tinged set, appeared in 2006 on Lost Highway Records. That same year, Morrison released his first commercial DVD, Live at Montreux 1980 and 1974, drawn from two separate appearances at the Montreux Jazz Festival. In 2008, Morrison released Keep It Simple, his first album of all-original material since 1999’s Back on Top. In November of that same year, Morrison performed the entire Astral Weeks album live at two shows at the Hollywood Bowl in Los Angeles, which resulted in 2009’s Astral Weeks: Live at the Hollywood Bowl album and Astral Weeks Live at the Hollywood Bowl: The Concert Film. His 34th studio album, Born to Sing: No Plan B, recorded in Belfast, appeared in the fall of 2012. In 2015, Morrison made his debut for RCA Records with Duets: Re-Working the Catalogue, which found him sharing the mike on 16 songs with artists such as Michael Bublé, Steve Winwood, Mick Hucknall, and Joss Stone. After signing a deal with Sony Legacy to reissue much of his back catalog, the label issued It’s Too Late to Stop Now…Vols. II, III, IV and DVD in June 2016. It consisted of unreleased music from the tour that produced the classic 1973 live album. Later that month, Morrison announced the release of an album of new studio set material. Released in September, Keep Me Singing offered 12 originals as well a cover version of Don Robey’s “Share Your Love with Me.” A year later, in September 2017, Morrison returned with his 37th album, Roll with the Punches, which saw him mixing new originals with renditions of blues and soul classics that inspired him by Sam Cooke, Bo Diddley, Little Walter and more. Guitarist Jeff Beck was a prominent guest. It peaked at number five on the Top 200 and number four in the U.K. He followed it less than three months later with Versatile, which was recorded in a handful of hotels in County Down. It featured Morrison delivering his own homage to jazz and iconic pop standards including George and Ira Gershwin’s “A Foggy Day” and “They Can’t Take That Away from Me,” Cole Porter’s “I Get a Kick Out of You” (one of two advance singles along with “Makin’ Whoopee”), “Let’s Get Lost,” “I Left My Heart in San Francisco,” and “Unchained Melody,” popularized by the Righteous Brothers. The covers are interspersed with six originals.

Portraits
broken recorddaniel adamsi get a kick out of youlegacy recordingsportraitsroll with the punchessony musicvan morrisonversatile
broken record, daniel adams, i get a kick out of you, legacy recordings, portraits, roll with the punches, sony music, van morrison, versatile
About the Author
Daniel Adams

Daniel is an illustrator/graphic designer based out of Austin Texas. He graduated from Pratt Institute with a Bachelors degree in Illustration and an Associates degree in Graphic Design. Daniel started his career in graphic design in the world of online casinos. Since then he’s worked with various clients from around the United States and Canada including but not limited to NHL, Subway, Paraco Propane, Pitney Bowes, Xerox, Conduent, Nestle Waters, The Spill Magazine, Stamford CT’s DSSD, Beechnut Baby Foods, Elizabeth Arden and much more.
RELATED ARTICLES
broken recorddaniel adamsi get a kick out of you
7.0