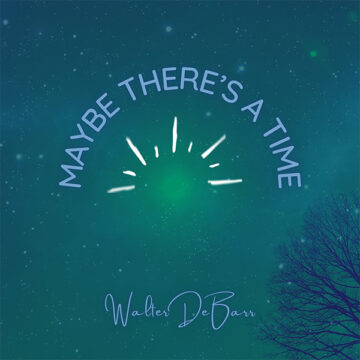 Some reviews are very difficult to write for many reasons. For me, this is a tough one, because not only was I a fan of Mr. Walter DeBarr but also a friend. His death came as a blow as we, his legions of fans, were waiting for the release of this album. DeBarr released his debut EP, We Fall, We Break in November of 2019, and since then released a couple of singles. During that time, he was working on this album, which he had just about completed prior to his death in February of 2022. Thankfully, his partner, Pamela Kesling collected all the material that DeBarr had recorded and assembled this album, with all proceeds going to DeBarr’s children.

She deserves a great deal of credit molding a coherent album. She did work alongside him and provided vocals on many of the songs. But, as with any posthumous releases, the passing of the artist overshadows the actual music. And one thing about DeBarr, his music was and is brilliant. Appalachian, he would say, but it is a warm mixture of folk and country with that trademark, distinctive gravelly voice. It is pure magic.

Unlike his debut EP, DeBarr worked with a number of musicians on this album, at times he christened them The Blue Hearts. But one thing is clear, as good as he is solo, he is even better with a band. They deserve a great deal of credit bringing the music to a whole new level. Al Folk (drums), McLean James (lead guitar), Kesling (vocals), Joey Lafferty (bass), Cameron Miller (drums), David McGuire (lead guitar), Steven Schumann (cello), and JD Thomas (bass). There are various line-up for various songs, but these musicians assisted Kessling and DeBarr into a different arena. To demonstrate the difference a band makes, Kessling includes the acoustic version of “Blackened” and the full band/produced version of the same song. It is a strong song and with a band brings on a whole new energy and urgency.

“I’ll be chasing fireflies at night, wondering if you’re alright” kicks off the opening track, “Minute To Myself”. It is a brilliant way to open the album and in some ways the line and the song sums up DeBarr.  The title track follows suit, with the melancholy “Maybe There’s A Time”. DeBarr was not afraid to lay it out in the open, fears, hopes and dreams. Maybe not autobiographical, maybe it was, but it was honest. He wrote and sang honest music. His blend of genres is quite stunning and his ability to write a strong melody accompanied by equally strong lyrics made it a perfect combination.

On this album, he rocks out a little more, and explores the blues. Songs like “Halo’s Broke” feature gritty guitar solos while “Bulletproof” is more standard blues. But, as usual DeBarr makes it all work, and thanks to Kessling all the songs come together. Perhaps the most interesting part of the album is the two versions of “I Come In Waves”. “I Come In Waves 2” is an interesting exploration into a little bit of experimental music, featuring backwards tapes at the beginning. This demonstrates that DeBarr had a lot of musical ideas that he sadly never will be able to turn into reality.

Maybe There’s A Time is a brilliant album. Kessling had a difficult task assembling this album but she should be proud with what she has done. I have no doubt DeBarr would be smiling and approve of the finished product. She has allowed fans to hear his voice and diverse music. It stands as a remarkable debut album. DeBarr told me once he was a hugger, this album feels like a big warm hug from a talented artist.

Born and raised in Whitby, Aaron discovered music through his love of The Beatles. This led to a career in radio, writing for various publications, and ultimately a radio show about The Beatles (Beatles Universe), which ran for over four years. When not immersed in music, Aaron enjoys spending time with the loves of his life -- his wife Andrea, and daughters Emily and Linda (all of whom have an intense love of music too).
RELATED ARTICLES
album reviewalbum reviewseyes to the sky
8.0