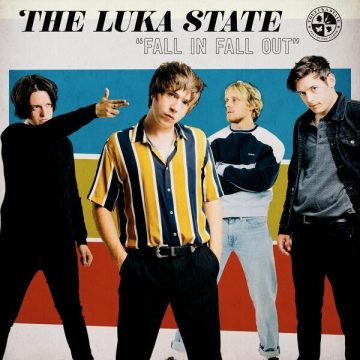 The Luka State
Fall In Fall Out
AntiFragile Music

While many bands may list The Clash as one of their inspirations, few often deliver on a sound reminiscent of the quintessential and incredibly unique punk outfit. The Luka State, hailing from the UK, fall into the latter category. Their debut full length album, Fall In Fall Out, consisting of their 2020 release, Real Thing, along with an additional four songs, proves to be an exciting album worthy of comparison to Joe Strummer and company.

Fall In Fall Out breaks down the gate with the up-tempo and distinctively modern punk anthem, “Feel It”. A polished and catchy song driven by an offbeat pulse and throat wrenching vocals balances a sublime punk tone under what could be a modern alternative rock radio hit. The Luka State truly dig deep into a far more unique and exciting sound on “Bury Me”, a fiery and relentless banger guided by colourful chords and a sophisticated sense of songwriting that most punk bands simply avoid. The push and pull between a dangerous, rough, and raw punk vibe and modern alternative rock tones is a defining feature of The Luka State’s sound, and plays a central role between songs on Fall In Fall Out, giving the album a wide range of stylistic influences.

That being said, The Luka State are at their strongest when they embrace a grittier sound. Simply put, it is in these moments, heard on “Kick In The Teeth” and “What’s My Problem”, where The Luka State sound as if they are setting the pace for punk rock of the new decade rather than chasing trends of mainstream radio from the last five years. That being said, the previously listed songs, including “Bury Me”, are all fantastic displays of songwriting and sheer punk rock performance. “[Insert Girls Name Here]”, however, is definitely the strongest track on the record with a blistering pace matched by an urging intensity and a sense that it can all fall off the rails at any given second. While the band manages to hold it together, the track is truly incredible and is the most deserving of comparison to The Clash.

While Fall In Fall Out is not an all in punk record – taking a small handful of moments to express emotive, contemporary pop-rock inspired ballads – it shines brightest when The Luka State are at their heaviest. There are a number of explosive moments that feel unmatched by most alternative rock bands, while, on the other hand, the depth and strength of the songwriting on the album outclasses many of their punk contemporaries. The synthesis of punk and modern alternative rock, similar to what you’d hear on the radio, is refreshing on both sides of the spectrum and ultimately makes for an exciting album that sets The Luka State apart from their contemporaries.

A passion for music has always been a part of Gerrod’s life. As a young boy, he was raised on a steady diet of the music from The Chili Peppers, Aerosmith, The Stones, Prince, and others from his mum. Raised in the GTA, Gerrod continued to foster his love for music by attending a wide range of concerts and learning the drums. His unapologetic passion for music has no bounds and has spread to a wide variety of styles, whether it be the 90’s rock that sound tracked his teenage years, the jazz he studied in university, or his newfound love for hip-hop. He recently received his bachelors in music and education from York University and is passionate about writing and reviewing good (and less than good) music. Gerrod is also the drummer and songwriter for a Toronto based rock & roll band, One In The Chamber.
RELATED ARTICLES
album reviewalbum reviewsantifragile music
8.0