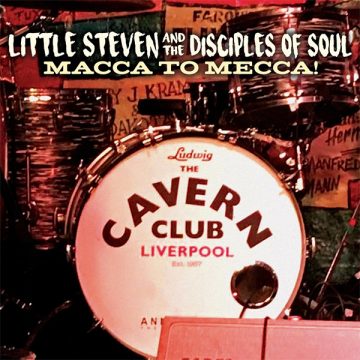 Little Steven And The Disciples Of Soul
Macca To Mecca!
Wicked Cool/Universal Music

In 2017, Little Steven and The Disciples of Soul hit the road to promote its then new album, Soulfire. Highlights of that tour were released as a live album, Soulfire Live!. Wicked Cool Records have released an expanded version of the CD box set, which includes the new CD which can also be purchased separately. Beatle fans who missed out on the vinyl are going to be very happy.

The extensive tour included a European leg, with several dates in the UK. Macca To Mecca! captures one complete show and one very special guest appearance in London. When Little Steven and The Disciples Of Soul performed at The Roundhouse in London in November 2017, Paul McCartney joined them for a spirited version of “I Saw Her Standing There”. McCartney sounds great and the entire outfit sounds like they are having a blast. The energy leaps out of the speakers and demonstrates the power of live music.

The rest of the CD/DVD is a performance the band gave at the legendary Cavern Club in Liverpool during that same tour. Here, Little Steven and The Disciples of Soul decided to pay tribute to The Beatles at a lunchtime gig. Beatle fans will know that they performed many shows at The Cavern during lunchtime, so as part of the tribute Little Steven and his band decided to take to the stage for a stunning show during lunchtime to do just that, for those lucky enough to catch the show.

The result is a rousing set full of Beatle songs, including those they covered or would have played at The Cavern. Again, the band is tight, which is pretty cool since the band could not fit on the stage together at the same time. You have to watch the DVD to see how creative the band was to fit  into the small club. More importantly, they sound unbelievable. Having seen the band live a couple of times, I can assure you that fans were definitely in for an exciting event.

I for one am glad Little Steven has released Macca To Mecca! on CD/DVD, as it is too good to be part of a limited edition. It is a live album that will be played years from now as an example of an excellent live album. Put on Macca To Mecca!, and soak in the atmosphere.

Born and raised in Whitby, Aaron discovered music through his love of The Beatles. This led to a career in radio, writing for various publications, and ultimately a radio show about The Beatles (Beatles Universe), which ran for over four years. When not immersed in music, Aaron enjoys spending time with the loves of his life -- his wife Andrea, and daughters Emily and Linda (all of whom have an intense love of music too).
RELATED ARTICLES
album reviewalbum reviewsi saw her standing there
10