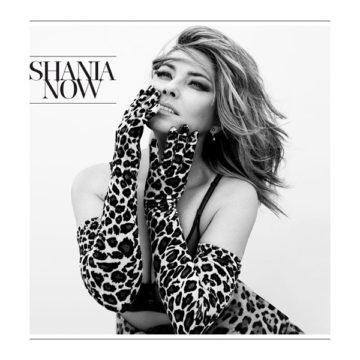 Throughout the 1990’s and early 2000’s, Shania Twain was inescapable. Her reign over both pop and country music was fueled by a string of hits from her four records, including “That Don’t Impress Me Much”, “Up”, “I’m Gonna Getcha Good”, and “Man! I Feel Like A Woman”; however, she has been relatively absent from the music scene throughout the late 2000’s as she went through a divorce to former collaborator Mutt Lang, raising her son, Eja, and battling dysphonia- a complication from Lyme disease that affects vocal chords. Her return to music started with a two year residency in Las Vegas between 2012 and 2014 and continued with a supposed farewell tour in 2015. Returning with her first album since 2002’s Up, Shania Twain has released Now, a record that makes a strong case from Twain’s relevance in modern music, even fifteen years since we last heard from her.

I must admit, as a big fan of Twain’s early work, the album’s lead single, “Life’s About To Get Good”, left me feeling underwhelmed. The track is very poppy, signifying Twain’s adaptation of modern pop to her signature blend of country. By no means, it is not a bad track, but I was nervous that Twain was sacrificing her song writing depth in order to fit in. This, thankfully, is not the case with Now. The album is entirely written by Twain, and while co-produced by Matthew Koma, Ron Aniello (Bruce Springsteen, Gavin DeGraw),  Jake Gosling (Ed Sheeran, Shawn Mendes) and Jacquire King (Kings of Leon, Norah Jones), Twain’s song writing shines as she navigates bouncing country tracks and captivating ballads. The album opens with “Swingin’ With My Eyes Closed”, a song that- surprisingly- takes reggae rhythms and blends them with country inspired instrumentation and a short and reoccurring riff that is simply infectious. The song is fun, highly original, and demonstrates an element of risky song writing on part of Twain which makes the song that much more exciting. Songs like the melancholic ballad “Where Do You Think You’re Going” and “Roll Me On The River” demonstrate a sophisticated song writing style that has matured over the years and emphasizes conviction and sincerity. It must also be noted that the former is not only among the best tracks that Now has to offer, but is a strong contender for Twain to write and record the theme to the next James Bond film.

Much of the speculation behind Twain’s return is regarding her voice, after all, that was the main reason her career was put on hold. Across Now, Twain sounds energized with a vocal timbre that resembles her youthful voice, only matured with age. Songs like the intense shuffle of “More Fun” and the evoking ballad “Solider” capture a sense of power and emotion from her vocals, bringing her excellent song writing to life. Twain’s voice proves to be not only unhindered, but her raspy tenor shines as one of the best that modern country has to offer.

While Now is certainly a strong record that stands as a testament to Twain’s vocal prowess and natural talent for inventive song writing, Now feels as if it is missing something.  The album doesn’t quite have a song that immediately pulls the listener in like how many of her early hits did. Unfortunately, this lessens the lasting impact that Now has, despite it being a good album. Long-time fans will rejoice for Twain’s big comeback that may feel less dramatic, but still serves as a strong record for Twain to fully return to music with. Not only is Now a fun and entertaining country-pop record- a style which Twain pioneered in her early career- but it takes Shania Twain to a more serious level of song writing that marks the start of a more contemporary era to her work. While Now may not be as big of a return as Shania had expected, it leaves me hopeful and excited for what else is to come from the second chapter of her career.

A passion for music has always been a part of Gerrod’s life. As a young boy, he was raised on a steady diet of the music from The Chili Peppers, Aerosmith, The Stones, Prince, and others from his mum. Raised in the GTA, Gerrod continued to foster his love for music by attending a wide range of concerts and learning the drums. His unapologetic passion for music has no bounds and has spread to a wide variety of styles, whether it be the 90’s rock that sound tracked his teenage years, the jazz he studied in university, or his newfound love for hip-hop. He recently received his bachelors in music and education from York University and is passionate about writing and reviewing good (and less than good) music. Gerrod is also the drummer and songwriter for a Toronto based rock & roll band, One In The Chamber.
RELATED ARTICLES
album reviews
7.0