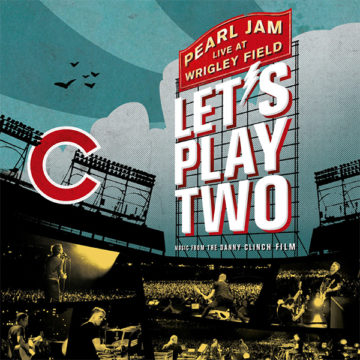 Not sure if you’ve heard, but in what may be the most exciting moment in sports history, the Chicago Cubs won the World Series last year, ending a 108-year drought. Having grown up in Chicagoland, Pearl Jam front man Eddie Vedder was seen at almost every championship game, pumping his fist with every score.

“Let’s Play Two,” a familiar expression to Cubs fans, was coined by Ernie Banks, one of the Chicago Cubs most loved players This documentary is a sweet tribute to Banks, who passed away in 2015, just two years after he joined Vedder on-stage for Pearl Jam’s 2013 Wrigley performance of “All The Way,” the song written as a tribute to the team. This new live album is part concert film, filmed at Pearl Jam’s two 2016 shows performed at Wrigley Field, and part concert diary, showcasing the highlights of the Cubs’ championship season.

As a Chicagoan, it’s a fun piece, but does that translate to fans around the world? I liked it because it was familiar, you see Vedder filling out a scorecard, touring the grounds of Wrigley and playing atop Murphy’s Bleachers across from the ballpark, but does that mean as much to people that didn’t grow up watching games there? Hard-core Pearl Jam fans might be disappointed, the film is more baseball highlights and Cubs history than it is sneak peeks into the backstage making of the two stadium shows. The music in Let’s Play Two takes a bit of a backseat, with the real story being the love Eddie Vedder has for his favorite team.

During the two summer shows, the band performed tracks spanning from “Ten” to “Lightning Bolt”, covering familiar favorites like “Jeremy” and “Better Man,” as well as lesser-known songs “Black Red Yellow” and “Crazy Mary.” The film ends with the song Vedder wrote specifically for the Cubs, their new anthem “All The Way.”

While there are more substantive Pearl Jam concert films, Let’s Play Two provides a bit more of an emotional connection for fans.mWe know Eddie Vedder loves the Cubs and his love for performing in his hometown in an intimate stadium setting easily shows during “Better Man” and “Alive.”

“In my films and photographs, I love to explore the relationship between a band, their fans and the location,” director Danny Clinch said of the project. “When it happens that the main characters of your film are Pearl Jam, the Chicago Cubs, their fans, and Wrigley Field during a historic moment, you know it’s going to be epic. Our instincts were correct to follow the story and it took us to a historic Game 7 of the World Series ending a 108 year drought for the Cubs. I have learned to welcome the unexpected and it always pays off if you’re ready for it.”

On October 13th, Let’s Play Two will have its television debut on Fox Sports 1 following Game 1 of the 2017 American League Championships. Let’s Play Two releases to home video on November 17th, with more details of the Blu-ray and DVD release to follow in the coming weeks.

Lucy Rendler-Kaplan is a native Chicagoan, recently returning home after 10 years in Los Angeles. Having worked in field marketing for the past 17 years, Lucy recently left corporate America to work as a consultant. When not running, Lucy can most often be found out with her dog, watching an NFL game, or listening to live local music. Passionate about writing, Lucy enjoys writing about music in lieu of playing it.
RELATED ARTICLES
album reviewseddie vedderlet's play two
9.0