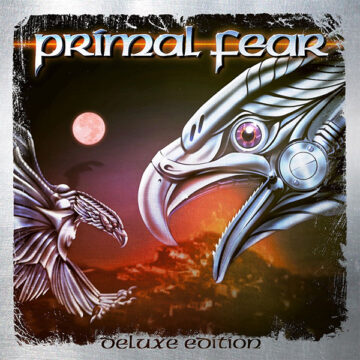 In October 1997 Ralf Scheepers (vocals)  and Mat Sinner (bass) formed Primal Fear in Germany. Both were well known in the heavy metal scene in Germany and they came together to form a band to play their style of heavy metal. Tom Naumann (guitar)  and Klaus Sperling (drums) rounded out the band and they were set to explode on the scene, and explode they did with their 1998 with the now classic Primal Fear. Primal Fear would go on to record a total of 13 studio albums, and two live albums and have multiple member changes. But they are taking the opportunity to celebrate their 35th anniversary, by re-releasing their classic debut, Primal Fear, with additional tracks.

The album opens with the short, beautiful instrumental “Primal Fear” but 35 seconds later, they unleash their power with their classic and much-loved “Chainbreaker”.  From then on, hard rock is the name of the game and heavy metal is the order of the day. This is classic heavy metal. Scheepers and Sinner had a singular view as to what ‘heavy metal’ is and they acted on it. Although a very new approach to the genre, at the time, they still took time to pay homage to their influences, such as Deep Purple, who they covered admirably (“Speedking”). Although the influences are there, Primal fear had their own sound. They did not want to sound like The Scorpions, and they succeeded. Nothing wrong with the Scorpions, but Primal Fear wanted to go for the primal core of the music.

As an example, listen to “Promised Land”, with the heavy, thundering drums introducing the song and its absolute power. Yet, the lyrics are so positive and optimistic, which is somewhat unexpected. It does not fit with the tone of the song, and yet it works. And that is the whole of the album. The band put things together that really shouldn’t fit together. The use of a synthesizer on “Silver And Gold” and the orchestra on “Tears Of Rage”. It is not the typical ‘power ballad’, but rather more prog rock. Again, everything does fit together.

The original album ended with the suitably titled “Thunderdome” which is more what you expect musically and lyrically. The song is over the top and apocalyptic and frightening and is really the only way to end the album. But this new version does not end there. Included in this deluxe edition are bonus tracks. They cover Accept with the song “Breaker”, which originally appeared on the 2010 remastered/rerelease. It is nice to hear it again, but it is not essential listening. What is more essential are the two live tracks included “Chainbreaker” (which sounds even more energetic) and “Running in The Dust”. Both benefit from the live treatment and make one wish they had included a bonus disc of an entire concert.

Primal Fear is now considered a classic album. It is hard to imagine the band thinking 35 years ago that they would set some standards and influence countless bands. Instead, one gets the sense that they wanted to come together to write and record the best album possible. Primal Fear deserves the ‘deluxe’ treatment and its return to the record racks is certainly welcome.

Born and raised in Whitby, Aaron discovered music through his love of The Beatles. This led to a career in radio, writing for various publications, and ultimately a radio show about The Beatles (Beatles Universe), which ran for over four years. When not immersed in music, Aaron enjoys spending time with the loves of his life -- his wife Andrea, and daughters Emily and Linda (all of whom have an intense love of music too).
RELATED ARTICLES
album reviewalbum reviewsatomic fire records
9.0