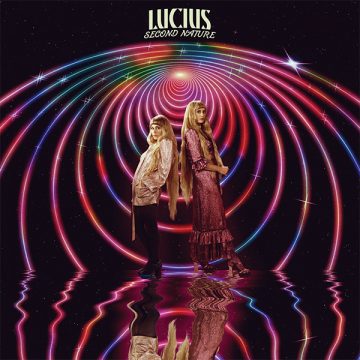 On their sophomore effort, Good Grief, Brooklyn four-piece Lucius perfectly reinvented their act. From the ashes of their indie-folk debut rose an electrifying callback to 80s and 90s dance-pop, captained with the confident allure of Jess Wolfe & Holly Lasseig’s intoxicating harmonies. This vocal euphoria, backed by the riveting instrumentations of Dan Molad & Peter Lalish, has withstood more than half a decade of trials and tribulations, culminating in Second Nature, Lucius’ most concise record yet.

On lead single, “Next to Normal”, Lasseig & Wolfe chant over psychedelic guitars and multi-layered drums (are those bongos?!) in gratitude for their relationship — the co-writing bond that birthed Lucius. It sets the stage perfectly for an album driven to get past life’s inevitable realities with the power of music and movement. Songs like “Dance Around It” and “Second Nature” get directly to the point of this, proudly proclaiming “Our love’s burning out, we’ll keep dancing around it” over an infectious combination of distorted guitar and rapid drumming which sounds like a Top 40 take on disco. Even the undeniably catchy “Promises” uses its runtime to channel jaded feelings with jubilance as the ladies chastise a scorned lover with “Promises/Empty like the bed you sleep in.” Sheryl Crow’s production feels most present here.

Lasseig & Wolfe don’t always play it so coy, though. On ballads “24” and “White Lies” their heartbroken vocals go centre stage. When the lyrics aren’t hiding behind the music is when things get serious, channeling compelling harmonies with moving words. On “The Man I’ll Never Find” the two hopelessly proclaim “I wish it was worth the work and I wasn’t tired/I can’t just stop and try to fix it if I know that it was never right.”

Second Nature doesn’t always focus on the hard times, though. “LSD” relinquishes itself to the seductive joys of romance – in this case, the acronym bashfully stands for ‘love so deep’. “Heartbursts” puts John Hughes credit rolls to shame with its insanely cheery chorus of “Better give your heart than never give at all” over punching drums and dreamy keys. This dichotomy between sadness and joy is appropriately summed up by “Tears In Reverse”, which asks where to put the blame, proposing “What comes first/Wanting the water or feeling the thirst?”. The song’s solution, of course, is to turn whatever it is into something meaningful.

With their third record, Lucius culminates their mix of balladry and indie pop into a total whole, thematically weaving threads of heartbreak and hope together to blur the line between their deepest scars and greatest feats. And while Second Nature meditates on both, it’s hard to deny that it belongs in the latter category.

Robert Defina is an avid critic both on paper and in person. He spends more time writing album reviews than he does worrying about his future. He hopes that this sort of procrastination never grows old.
RELATED ARTICLES
album reviewalbum reviewsdine alone records
9.0