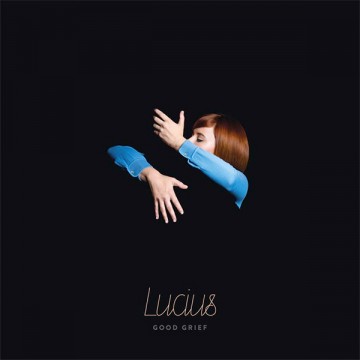 Lucius’s initial effort Wildewoman turned heads with its gospel-influenced, country sounding, clap-along tunes. Bubblegum pop was redefined with their bright, vocally driven arrangements. And when they weren’t having fun, Lucius knew how to turn it down just right (see: “Two of Us On the Run”). The band’s true power lies in vocalists Jess Wolfe and Holly Laessig, who chant-sing their high-pitched notes so perfectly in sync they might as well be the same soul.

Energy is not spared on Good Grief, the second record from the Brooklyn five-piece. While opener “Madness” suggests nothing much has changed, wheels start turning on the magical arrangement of “Something About You” – an undoubted radio smash hit in the making. The dance-pop fusion suits Lucius well, almost as if it had been exploring this genre the entire time. The production is synth-heavy in an authentic old-school way. The songs on Good Grief could fool you as gems from a past era, shiny in all the right places but subtle enough to give you the impression you may have heard this before. The problem, though, is that you may indeed feel like you’re hearing nothing new because the record itself is not as adventurous as it could be. Some songs use the same chords for the same functions, and this causes a few tracks to lack the bold identities they could otherwise possess. There are enough twists and turns in place, though, to perform some clever distractions from this trope. The greatest of all is in “Almighty Gosh,” whose ending runs course with a well-handled, static drowning of instruments.

What’s most impressive is how effortlessly Lucius manages to blend this new direction with its original appeal – this being attributed to Wolfe and Laessig’s vocal contributions, which boldly stamp every song with Lucius signature. The strongest display of this occurs on the penultimate foray, “Better Look Back” or on the standout “What We Have (to Change).” This mixture accumulates well enough to make you forget that “Dusty Trails” has no business on such an upbeat record, calling down to old blues with lines like, “Will a penny for your thoughts leave me broke?” Either that or “Dusty Trails” is so refreshingly inspired that it outshines all the pieces that came before it, and we thank Lucius for taking us back to their roots.

With their bells and whistles in order, Lucius has made a very coherent record with Good Grief. Their next challenge will be to expand this collection of songs into something that feels both natural and triumphant all the same. Good Grief stands as a great grouping of songs, but some of its content may grow forgettable in the near future.

Robert Defina is an avid critic both on paper and in person. He spends more time writing album reviews than he does worrying about his future. He hopes that this sort of procrastination never grows old.
RELATED ARTICLES
album reviewsdine alone recordsgood grief
9.0