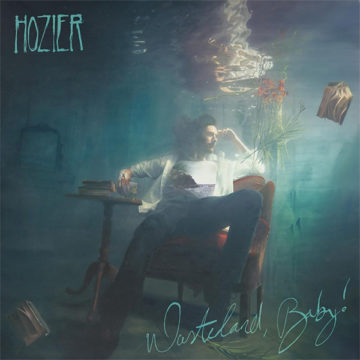 With the success of his first record, off the high of the globally recognized “Take Me to Church”, I don’t think anyone could argue that Hozier is facing some expectations this time around.  His self-titled debut churned out a handful of radio-friendly, fresh and beautifully written singles. His appearance in the mainstream seemed inexplicable. Well-crafted lyrics and southern rock influences seldom find themselves tied in with mass appeal. And yet, Hozier burned bright. So all ears are perked up now for the release of his second record, Wasteland, Baby! which Hozier (or, at least, his label) certainly hopes will have the same effect.

Opening the record is a duet with Mavis Staples, “Nina Cried Power”, which was released (along with four other tracks) as part of an EP in 2018. Taking this piece from the EP and opening the album with it feels like a fitting demonstration of this album’s construction. Besides the somewhat repetitive chorus, “Nina Cried Power” reigns in enough energy to get this 14-track album started. The tracks that are more indicative of the record’s elements, though, are the lead singles “Movement” and “Almost”, both of which ring true to the Hozier formula – incredibly well-crafted music that anyone could love.  The latter of which feels like a summery, cheery, lyrically smooth radio tune that demands the replay button.

While essentially every track is objectively good (instrumentally sound, lyrically tight, well produced), greatness is a bit more scarce this time around. Certainly somewhere at the top of his portfolio lies “No Plan”, an incredibly groovy, R&B-tinged ode to atheism (with a touch of synth). “There’s no plan, there’s no kingdom to come” he sings, denouncing heaven’s existence with his signature subtlety. Then there’s “Shrike”, the centrepiece ballad of the record, which features some of Hozier’s best lyrical arrangement as he sings “I couldn’t whisper when you needed it shouted/ But I’m singing like a bird to you now” over the reminiscence of Irish folk. And who could miss the sweet “Nobody” which channels funk on the beach with its powerful chorus. Other highlights include the riff-heavy stomp of “Dinner & Diatribes” and the gorgeous closer “Wasteland, Baby!” whose reverb production nicely ties in with the album’s underwater aesthetic

The songs that just miss the mark include the Top 40 bait that likely belongs to some other artist “To Noise Making (Sing)”, which feels a bit banal overall and sounds like it was written by Jack Antanoff.  There’s also “Be”, which feels the most influenced by modern rock, but falls apart on its weird pre-chorus where Hozier croons “Be be be be” in a not-so elegant way.

And while a few odd misses are forgivable, it causes the album to lack any clear direction. It’s this deconstructed track list that is the album’s largest flaw. Especially since tracks like “Sunlight” and “To Noise Making” certainly could have been left on the cutting floor. Perhaps a track or two less would make this album feel more concise and slightly less taxing, as it’s clear what belongs and what doesn’t this time.

Despite this, Hozier manages to repeat the mystifications of his original effort – a modern-spun rock album driven by a myriad of once-celebrated genres. And one thing is certain, Hozier does not seem interested in taking one route over the others. And why should he have to? It’s rare to have an artist in modern music who can jump from soothing lullabies to growling rock anthems to Top 40 radio tracks so effortlessly. What remains to be determined is whether Hozier is producing music of all colours out of reckless abandon or out of an identity crisis. Nonetheless, Wasteland Baby! succeeds as a sophomore effort in that it proves Hozier’s space in the spotlight is more than warranted and should remain unchallenged for now.

Robert Defina is an avid critic both on paper and in person. He spends more time writing album reviews than he does worrying about his future. He hopes that this sort of procrastination never grows old.
RELATED ARTICLES
album reviewalbum reviewshozier
9.0