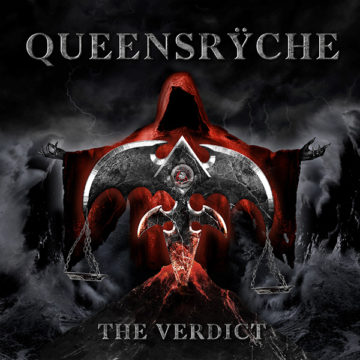 Washington’s legendary heavy metal outfit Queensrÿche have released a new album The Verdict.  Having built their reputation in the ‘80s, their eponymous ‘83 Iron Maiden-esque EP got the band noticed immediately, in part due to their video for lead single “Queen of the Reich” being shown regularly on MTV.  Queensrÿche kept evolving and kept challenging themselves and their fans by adding heavy doses of prog into their sound and continuously experimenting.  All of their releases from ’83 through to ’94 reached Gold or Platinum status and they cracked the Top 10 singles charts with “Silent Lucidity” in 1990, not to mention the numerous Grammy and MTV Music Video Award nominations.  It was Queensrÿche’s combination of great songwriting, masterful musicianship, their eclectic departures (one of their hit songs was a cover of Lisa Dal Bello’s “Gonna Get Close You” which crossed over into Goth territory), their intriguing sci-fi, sociopolitical and conspiracy-themed concept albums, and Geoff Tate’s wide-ranging operatic vocals that made them legends.

Then something happened.  Following great success came a long period of malaise, a creative lull, and seemingly confusion in terms of the band’s musical direction (including a failed attempt at grunge and an ill-conceived covers album). This culminated in founding vocalist Geoff Tate’s acrimonious departure from the band in 2012 and the arrival of new vocalist Todd La Torre. With La Torre, Queensrÿche found their second wind.  No longer shackled by Tate’s increasingly questionable creative influence and refusal to sing in the style that made him great, they returned to form and embraced their roots.

The Verdict continues this comeback and may be their strongest statement in 20 years.  It’s punchy and strikes the right balance between classic metal, prog, and the choppier, chunkier metal that became popular after 1992.  Solid riffs drive the songs and seem to sync perfectly with La Torre’s vocal styling. La Torre can growl with the best of them but he’s also a perfectly capable tenor vocalist when needed and this simply adds to a winning formula.

Fave tracks include the blistering “Blood of the Levant” and the anthemic metal juggernaut “Man the Machine.”  “The Verdict” is in: this album’s a keeper.

SPILL MAGAZINE strives to keep our readers up to date with news and events in the music industry. We keep you informed of the most recent information regarding new releases, tour dates, and information items about your favourite artists.
RELATED ARTICLES
album reviewalbum reviewsqueensryche
9.0