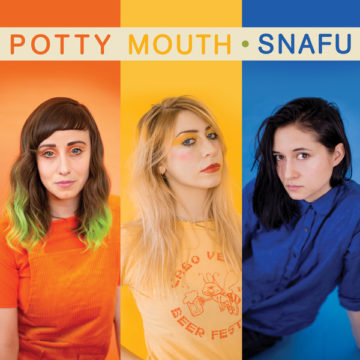 Today, the all-female punk band Potty Mouth released their second album, SNAFU. For fans, it has been a long wait since their first album, Hell Bent, released in 2013. The band has its roots in Massachusetts, and consists of three talented artists: Abby Weems (vocals, guitar), Ally Einbender (bass), and Victoria Mandanas (drums). Through their moody sound and cheeky lyrics, it is clear that they take inspiration from ‘90s groups such as Veruca Salt and The Muffs.

Potty Mouth adds their own refreshing twist to the punk rock genre. Singing about troubled relationships and the anxieties of growing old, they bring power to their repetitive lyrics with an unruly sound and passionate vocals.

Potty Mouth is exceptional at creating a different tone for each song that exemplifies the lyrics well. Standouts include “Starry Eyes” and the closer, “Bottom Feeder”. The tone of the former is light and airy, while the latter channels a grunge energy. In “Bottom Feeder”, Weems shows off the range of her voice near the end of the song, making me wish that she had used the same dynamic style on the rest of the album.

SNAFU will simultaneously take you back and propel you forward into the future, where punk rock should be. Potty Mouth successfully created a cohesive album with each song easily leading into the next. SNAFU does not disappoint.

Bianca Mazziotti has been a music addict ever since she was six-years-old and won an acoustic guitar in a contest. Her passion for music only continued to grow, and you can now find her enjoying live shows all over Toronto. She hopes to continue combining her two passions, music and writing, well into the future.
RELATED ARTICLES
22abby weemsalbum review

by Bianca Mazziotti on February 19, 2019
THE MUSIC INDUSTRY IS ANYTHING BUT A SITUATION NORMAL, MOST LIKELY, IT IS ALL FUCKED UP A [...]