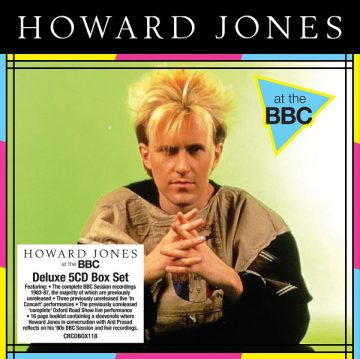 The early 1980s were an exciting time for music. Much like in the ‘60s and ‘70s, the BBC was still an important force in music and artists were invited into the BBC studios to perform live and alternative versions of their songs. Some artists were just starting out and not even signed to a major label.

Sometimes artists would perform songs that were never recorded by the band in the studio, in fact The Beatles were famous for this, as was New Order. Howard Jones did something similar when he made his appearances on the BBC. Take his appearance on the Kid Jensen Show on BBC Radio 1 in March 1983 as an example. He performed “Don’t Put These Curses On Me” which really never made it past the demo stage, and was not released until 2003 on his The Very Best Of Howard Jones. This was a very adventurous for an artist whose debut single was storming up the charts.

At The BBC, is a fairly comprehensive five-CD set of Jones’s appearances on the BBC. He debuted in 1983 with his single “New Song”, and very quickly landed a spot on Kid Jensen’s show. The songs performed, found on this CD package include the current single, but then he moves into some interesting songs, two of which would appear on his debut album Human’s Lib. The early versions of the songs don’t greatly differ from the released versions, but there are differences. When he returned to the show in May of 1983, he performed songs that were obscure (such as “Risk” and “What Can I Say?”, which was recorded in 1981 and found on a various artists album) and songs that would become reworked for his debut album (such as “Love?” which went on to be the worldwide hit “What Is Love?”. Here it is very different).

By 1985, when he appeared on Janice Long’s show, he focused on his then current album Dream Into Action, and he was somewhat less adventurous with his song selection. By this point, he was a worldwide phenomenon and achieving success that even he could not have predicted. The songs do still have a live, raw sound to them, but this appearance is just a little less interesting than his earlier ones.

The set also features four concerts recorded for the BBC. These are absolutely a treat to hear. Jones is extremely comfortable in front of an audience and the end result is the excitement of his early, 1980s concerts. The sound is exceptional and they are here in their entirety.

These are not all of Jones’s BBC appearances, but it is fairly comprehensive of a defined era. Jones is the consummate professional and sounds fantastic live, as is evidenced in this collection. At The BBC is a treasure trove of recordings that fans will love to not only hear buy have in their collection.