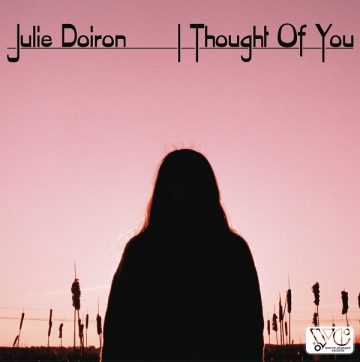 Julie Doiron
I Thought Of You
You’ve Changed Records

It is hard to believe that it has been almost 10 years since Julie Doiron released a full-length solo studio album, which is not to say she has not been busy, because she has been very prolific during this time. She has released a couple of Spanish language EPs working with Mount Eerie and Julie and the Wrong Guys, but, this is her first full solo outing in many years, and it has certainly been worth the wait. I Thought Of You Is an album that mixes Canadiana, rock, a bit of grunge, and a bit of country. It seems to be all over the place, and yet Doiron pulls it all together to make one excellent album.

She kicks off with “You Gave Me The Key” which opens with her singing “there was never a plan” and as a single guitar comes in, she adds “no need to explain”. This is a great way to begin. It fits with the overall theme but is also a great way to address her solo absence. It is wonderful and with it she brings the listener into her world. It certainly sets the stage for the a very honest and powerful album, that Doiron for which makes no apology.

Helping her is longtime friend and collaborator Daniel Romano. How he found time to assist her is beyond me, given the volume of music he has released during the past 18 months. It is nice to see them playing together again. She was once in a band with Romano, Daniel, Fred and Julie, and their album is well worth seeking out. He is the perfect support for Doiron. He brings his brother and drummer, Ian Romano, to provide the solid and creative beats for the album, while acclaimed singer/songwriter, Dany Placard provides bass. The end result is that the backup band can swiftly move from one genre to another.

For example, “Just When I Thought” is very much a psychedelic rock number, while “Ran” falls nicely into the grunge category. Throughout the album, Doiron moves easily from one genre to the next, all the while coming up with wonderful lyrics and remarkably melodic and catchy tunes. “Thought Of You” could be a Daniel Romano rocker song, but in Doiron’s hands, becomes even more plaintive and in many ways very painful. “Good Reason” is a nice mix of Canadiana and country, while “Ran” is very much a slow, grunge-like song.

Overall, this is full of strong melodies and thoughtful beautiful lyrics. It takes its time and yet it is full of short bursts of energy. However, she does take her time in letting it play out. The songs are not long, but they pack a punch. I Thought Of You certainly showcases everything wonderful about Doiron, intense lyrics, strong melodies and fantastic songs.

Born and raised in Whitby, Aaron discovered music through his love of The Beatles. This led to a career in radio, writing for various publications, and ultimately a radio show about The Beatles (Beatles Universe), which ran for over four years. When not immersed in music, Aaron enjoys spending time with the loves of his life -- his wife Andrea, and daughters Emily and Linda (all of whom have an intense love of music too).
RELATED ARTICLES
album reviewalbum reviewsjulie doiron
9.0