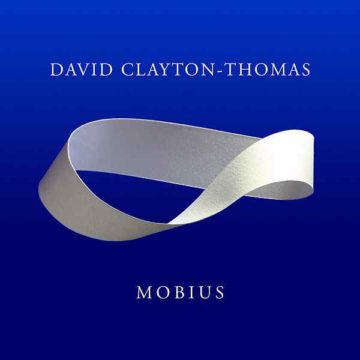 The temptation for many artists from the classic rock era is to hit the nostalgia concert circuit, dragging out their greatest hits. Though touring was quite lucrative, playing only the golden oldies was something that bothered David Clayton-Thomas. In 2005, he broke with Blood, Sweat & Tears, moved back to Toronto, and since that time he has released a new album ever year or so.

Clayton-Thomas’ new album, Mobius is an ambitious work that sees the former BS&T front man wearing a variety of musical hats. Co-produced with his long-time compadre and musical director George Koller, Mobius takes the listener on a stylistic journey, with Clayton-Thomas’ iconic voice serving as the star around which the songs revolve.

Mobius is a stunning collection of songs, with Clayton-Thomas collaborating on writing with each of his four band members. With a lineup that includes drummer Larnell Lewis, keyboardist Lou Pomanti, guitarist Eric St-Laurent, and Koller on bass, the songs are well served by the incredible talent of these musicians.

Of the album and its title, Clayton-Thomas notes that, “We started with “Back To The Sixties”, and it went into some very progressive, modern stuff, and it ended up with down-home bar room rock ’n’ roll. Everything had kind of come full circle musically. I’ve always been fascinated by the Mobius concept of infinity.”

Full circle, indeed! The album’s opening track, “Back To The Sixties” sounds at first like a nostalgic, lilting paean to the love generation, and will certainly be a hit among long-time fans. In actual fact, the song smashes a few clichés, with the artist pointing out that there was more to the ‘60s than sex and drugs and rock ’n’ roll.

There are many standout tracks on this album, with plenty of diversity in sound and style, compliments of Clayton-Thomas and his collaborators. From the sweet samba of “Carnival” and the smooth urban jazz of “Long Night” (with a killer violin solo by Hugh Marsh), to the gospel changes and tight horns of “The Morning News,” Mobius definitely has something for everyone. It is a treat for new listeners and devotees alike.

Musician, writer, and grandad Bryan Williston is a fan of music in all of its forms. He loves to listen to, play, and talk about music, and to share his ideas with others. Despite the failings of humans, he is hopeful about the future, and thinks that Spill Magazine readers are just the best. Bryan lives in Whitby with an assortment of people and dogs.
RELATED ARTICLES
album reviewalbum reviewsanother smiling phase
9.0