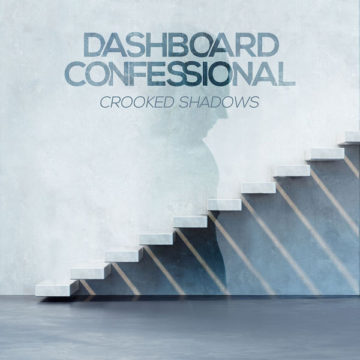 I have to be honest, I was a little surprised when I listened to the first Dashboard Confessional album in nine years (their last studio album was 2009’s Alter the Ending). I was surprised that Chris Carrabba resurrected the band after such a long hiatus, but I was even more surprised with the music contained within the album Crooked Shadows.

Dashboard Confessional, or rather Carrabba, had been slowly moving away from the punk/pop of the early 2000s into a more folk-fused sound. He was relying on his acoustic sound more and more, but for Crooked Shadows, he has taken a few steps back into 2005. This album is full of angst, pop and punk, and quite frankly sounds like Dashboard Confessional of years gone by.

I have always thought that Carrabba and Dashboard Confessional stood out from the other bands of this genre. Carrabba wrote some incredible songs, and Alter the Ending was more or less a concept album, something few bands were even attempting at the time. But for Crooked Shadows he seems to have slipped back into the comfort of the past, and this may work for him, commercially.

“We were the kids that left home, darling, too young” is the first line of the album (from the song “We Fight”). “We took our share and then some,” he continues. Clearly, he is reflecting on his career and perhaps a missed youth. Perhaps this is why he has reverted back to the older sound of the band. Maybe he is recapturing his youth throughout the record.

That does not mean the record is bad, not at all. The music is well-played, extremely well-produced, and overall it is well-put-together. But, unlike previous Dashboard Confessional albums, it is more a collection of songs, rather than an album.

The songs have a great deal of energy and strong melodies. However, there is a sameness throughout until you get to the first single of the album, “Heart Beat Here.” Here the acoustic guitar comes out (finally). “Come on home and let yourself heal,” sings Carrabba. Again, a reflection of years on the road? Truthfully, this song is what I thought (and maybe hoped) the album would sound like. A beautiful, thoughtful, and, to my ears, a deeply personal song. It plays like an oasis in the pop punk songs of the rest of the album.

The album closes with the mellow “Just What To Say”, angst-ridden but a standout from the rest of the album. It is an appropriate way to end the album and a nice closing song.

Crooked Shadows is a good album. I was expecting more from Carrabba and Dashboard Confessional. After almost nine years, perhaps the expectations were too high. Perhaps the next record will be something very different and demonstrate growth in this talented band.

Born and raised in Whitby, Aaron discovered music through his love of The Beatles. This led to a career in radio, writing for various publications, and ultimately a radio show about The Beatles (Beatles Universe), which ran for over four years. When not immersed in music, Aaron enjoys spending time with the loves of his life -- his wife Andrea, and daughters Emily and Linda (all of whom have an intense love of music too).
RELATED ARTICLES
album reviewschris carrabbacrooked shadows
8.0