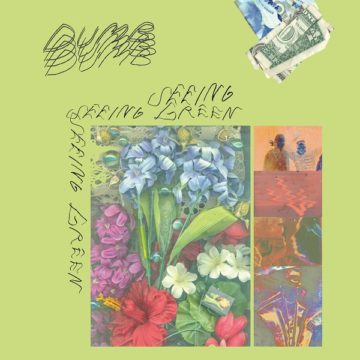 Only a band with music that is decidedly smart would call themselves “Dumb”. With clever, snarky lyrics woven into a mockery of the conventions of money-obsessed modern life, Seeing Green is both the album’s name and theme, as it deals with the envy that ravages contemporary life on a daily basis. Dumb’s first true full-length album, Seeing Green has the awkward, graceless charm of the soundtrack to an indie movie, but with electric guitars and a stylish punky flair. The post-punk quartet, featuring Franco Rossino (guitar), Nick Short (guitar), Shelby Vredik (bass), and Pipe Morelli (drums) has a loveable amateurish sound, with simple yet powerful guitar-heavy instrumentation.

The tracks on Seeing Green mostly blend together into a series of messy, catchy guitar riffs with a penchant for dissonance. Pockets of sheer noise are interspersed with trickles of more melodic musicality, resulting in an unpolished yet enthralling sound. The album’s singles include “Barnyard”, with an upbeat guitar riff and the requisite cowbell, and “Party Whip”, an earworm with paw-muted guitar and a screeching feedback solo, decorated with a flurry of tinkling noises. Other standouts include “Romeo”, the first track on the album and highly representative of Seeing Green’s frenetic guitars and peculiar habit of talk-singing, and the slower, emotion-laden “Roast Beef”. The grungesque “Hard Sea” is strange and delightful, with meandering, shapeless verses that are mumbled rather than sung and guitar interludes that break up the unconventional bits. “Mint”, the title a nod to Dumb’s record label, has a fuller sound than the rest of the album, with plucking, fragrant guitars leading into heavier strumming. The guitars get more electric and distorted throughout the song, adding a gravity to the sardonic tune. “You’ve been flashing green and so have I, I guess it’s true/money in your pocket and while mine is wearing through”, the song muses, repackaging the themes of capitalism and greed into a softer, more palatable medium of analysis by painting the green-eyed monster with a less aggressive, minty shade.

Isabel is an English major at the University of Toronto, and spends most of her time reading books, listening to punk rock music, and writing for anyone and everyone willing to read it. Raised in Toronto, her somewhat eclectic music taste has been shaped by a healthy mixture of mosh pits and Mirvish musicals. She thinks live music is the highest form of entertainment.
RELATED ARTICLES
album reviewalbum reviewsmint records
9.0