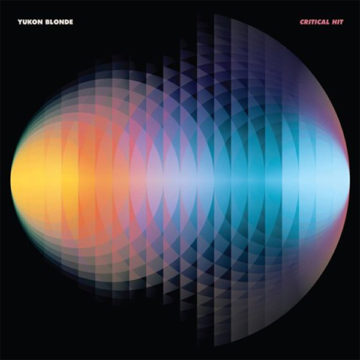 Critical Hit is Yukon’s fourth album, and their first since 2015’s On Blonde. For this album, they employed the services of Tony Hoffer (Beck, Air, The Kooks) to produce, and it was a very wise decision.  For this album, musically they play it safe, dipping into the ’80s pop, rhythm and blues, and soul. What Hoffer does bring to the band is a crisper sound and an emphasis on the vocals. This is a good thing. Lead singer and principal writer Jeff Innes seems to have a lot to say on this album and it is good to hear him clearly.

Yukon Blonde are a band who have studied and learned the 1980’s, and 1990’s pop music, which is the main problem with the album. Although it is good, full of well crafted songs and some great instrumentation, the music, at times, is a bit derivative. For example, “Feeling Digital” channels Sparks, while other songs just have the 1980’s feel.

On the positive side, the album does hold together very well and it is a rather pleasant listening experience. The album has a personal feel to it, and Innes writes some very fine lyrics. Listen to “Too Close To Love” with lyrics such as:

“I feel the waste, isolated
Out of phase, assimilated
Need to break it, saw my sign
Too close to love”

Quite poetic and very original. The song, and many others seem to reflect love gone wrong and Innes able to articulate himself very well.

Yukon Blonde are a talented group and have released some incredible music. Their new album, Critical Hit is a good album. They seem to take the easier road and play it safe by dipping into the 1980’s catalog. By this stage, given their history, more is expected from this band. They have the capability of being very original, but this is not reflected with this album.

Born and raised in Whitby, Aaron discovered music through his love of The Beatles. This led to a career in radio, writing for various publications, and ultimately a radio show about The Beatles (Beatles Universe), which ran for over four years. When not immersed in music, Aaron enjoys spending time with the loves of his life -- his wife Andrea, and daughters Emily and Linda (all of whom have an intense love of music too).
RELATED ARTICLES
album reviewalbum reviewscritical hit
10