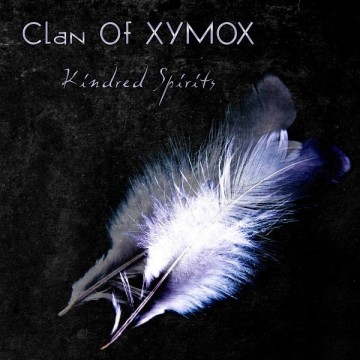 Clan Of Xymox’s album Kindred Spirits is a collection of 11 cover songs that hold special meaning to Ronny Moorings, the mainstay member of the near 30 year-old group. It’s always interesting to learn what songs have inspired such a legendary band, and even more interesting to hear their artistic interpretation of these favorite songs. The group tries to preserve the mood and feel of the originals and is mostly successful; however as a result some of the tracks come across as uninspired. The production and sound quality of the overall recording is acceptable, but improved mastering might have made a difference in both sound quality and emotional value.

Kindred Spirits starts off with “Venus” by Shocking Blue (possibly better known when performed by Bananarama). While it definitely encompasses the Xymox sound, this version comes off as generic. If you like the original, you may find yourself singing along. If you don’t, there’s nothing here to grab you. Do not jump past this song, but do not expect anything original or overly inspiring.

Next up is The Sisters Of Mercy’s “Alice.” A defining song of the genre, Xymox creates a version that delivers the raw emotion and sonic excitement that most listeners will expect. The production is quite good and the musicianship is top notch, especially evident in the precise guitar playing and the passion of Moorings’ vocal delivery.

The Department S track “Is Vic There?” jumps out as an album highlight. It’s danceable, dark, incorporates simple drum machine rhythms, atmospheric synthesizers, and ’80s Goth-style guitar textures that perfectly define the era of Xymox’s peak popularity during their years with label 4AD. Although a bit repetitive, the song is still quite catchy and addictive.

Possibly my favorite cover on this album, and certainly my favorite Cure song, Xymox’s version of “A Forest” follows the original version quite closely in mood and sound, although created solely, or mostly, with synthesizers and programmed drums. While some listeners may feel it’s too similar to the original, it manages to create a comfortable and familiar atmosphere and provides a sense of nostalgia to the long-standing fans of the genre.

Xymox’s version of Siouxsie And The Banshees “Red Light” makes you want to adjust the volume to a medium level, sit in the middle of an empty room illuminated only by a few dim candles while fully absorbing the eerie and slightly disturbing sound. If you like dark music, you can’t get much darker than this.

Depeche Mode, arguably the most successful Electro-pop band of all time, is very hard to cover because most of their songs are so perfectly produced and have distinct personalities. Almost any cover of Depeche Mode tends to sound watered down or lacking in excitement – and I believe this version of “A Question of Time” suffers from this fact. You will likely find yourself craving the original after hearing this version as it might not fully satisfy you.

“Blue Monday” has to be the most covered song in the history of the world. Thankfully, Xymox delivers a version that varies just enough from other remixes. The drum fills are almost identical to the original, however, and this helps to preserve the mood of the original. This is a decent cover.

Overall, Kindred Spirits is a modestly enjoyable album. Take the record for what it is worth: an album that intentionally tries to recreate the mood of the original songs while stamping each with the sonic signature of a legendary Electronic Goth band. It’s a nice background listen for most people and a must-have for diehard Xymox fans, but it lacks the emotion of the originals that Moorings holds so dearly in his heart.

Spill Magazine writers strive to keep our readers up to date with news and events in the music industry. We keep you informed of the most recent information regarding new releases, tour dates, and information items about your favourite artists.
RELATED ARTICLES
album reviewsclan of xymox
9.0