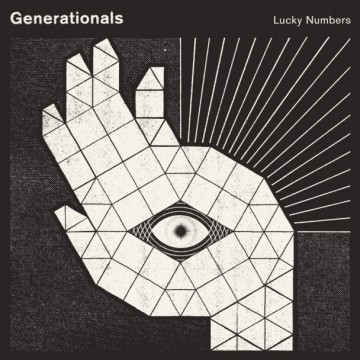 The Generationals (the New Orleans-based duo of Ted Joyner and Grant Widmer) dropped the wholly under-buzzed album Actor-Caster early in 2011. It was a sublime collection of Garage Indie-pop that promised great things for the band’s future. Their sound benefitted from a raw energy and perceived lack of calculation, flirting at times with minimalism, Stax-retro and wall-of-sound cacophony. If Dan Boeckner (Wolf Parade) fronted Belle & Sebastian and then borrowed Peter Bjorn & John for a creative consult, then you might have the Generationals.

The sonic variety on Actor-Caster fostered repeat listenability. What we have with this Lucky Numbers EP is a narrower bandwidth of Generationals’ oeuvre. The concept behind the record was to venture out into “wherever” New Orleans and just record music. “Wherever” meant the basements and living rooms of friends, abandoned old houses, literally wherever inspiration struck them. The result is a synth-heavy trilogy of tracks with a definite medal-ceremony dichotomy. One is great, one is really quite good, and one is interesting but relatively uninspired.

First the relative meh. “Hazel House” is a forgettable and repetitive exercise, reminiscent of a Talking Heads track when David Byrne fell madly in love with a bland chorus, but without the compensating musicality. Fortunately for Lucky Numbers, the title track makes up for the “Hazel House” blues. “Lucky Numbers” is like a wintergreen mint after lukewarm tikka masala. It’s springy and insidious Synth-pop that rattles around your brain long after the fade-out. “Sale City” follows that up with more synth, this of the driving, pulsing variety more reminiscent of some of the tracks on Actor-Caster.

Due to the EP’s “wherever” recording concept, we can’t consider this a new direction for the Generationals. Rather, it’s the Generationals experimenting with one of their many micro-influences and perhaps purging the creative impulse to indulge it further. If it is a new direction, however, it’s less of a blind leap than, say, the synth high dive performed by Yeasayer with Fragrant World (2012). If only a one-off experiment, the brief EP offers a couple of tracks to throw around the year-end mixes and a tease for what’s yet to come from the Generationals. And that’s not too bad at all.

James David Patrick has a B.A. in film studies from Emory University, an M.F.A in Creative Writing from the University of Southern Maine, and an honorary Ph.D. in bullshitting about everything else from the College of Two Pints. His fiction and non-fiction has appeared in PANK, Monkeybicycle, Squalorly, Specter Lit, and Bartleby Snopes among other wordy magazines. While he does not like to brag (much), he has interviewed Tom Hanks and is pretty sure you haven't. He bl-gs about music, movies, and nostalgia at thirtyhertzrumble.com and runs the James Bond Social Media Project at thejamesbondsocialmediaproject.com. James lives in Pittsburgh, PA.
RELATED ARTICLES
album reviewsgenerationals
8.0