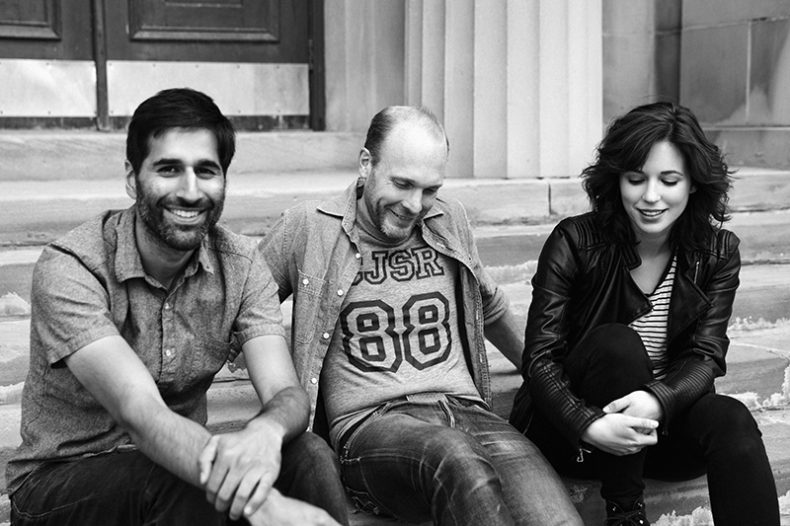 To round out their successful road testing tour The Rural Alberta Advantage (The RAA) returned to frontman Nils Edenloff’s home province. Edmonton graciously welcomed back the Toronto-based RAA with a sold out show and a greeting suitable for a hometown hero.

To kick off the evening local act Jordan Norman & The Wisdom Teeth enthusiastically took the stage. Their humorous lighthearted songs and carefree attitudes quickly captured the attentions of the growing audience. Their performance featured Norman belting out lyrics alongside his backing singers including his friend singer/instrumentalist Alex Vissa. Instrumentally Jordan Norman & The Wisdom Teeth were quite minimalistic with Norman on guitar and Vissa occasionally contributing harmonium riffs alongside a tambourine.

Eventually, The RAA initiated their 22 song set that brought The Needle Vinyl Tavern to life. Throughout this recent tour, key elements of The RAA have been experimented upon. Longtime vocalist, keyboardist, percussionist, and bass pedal player Amy Cole announced her departure from the band last September. Rising in her footsteps is her replacement, Robin Hatch. Hatch doesn’t change the band’s sound significantly and is apparently quite capable of managing multiple instruments at once. Having already appeared on the band’s most recent singles, fans are growing accustomed to the latest member of this much-beloved trio.

Throughout the evening Edenloff struggled with a cold that hampered his vocal performance. Despite this obvious setback he still managed to deliver a powerful and energetic performance with screamed lyrics occasionally cracking away due to sickness. To alleviate the amount of singing necessary some songs were turned into singalongs with the audience contributing to familiar choruses.

One of The RAA’s most defining features remains Paul Banwatt’s explosive drumming. Living up to a reputation for his energetic performances, Banwatt maintains his ability to capture the audience’s attention and get the crowd clapping along.

Over the course of their recent tour and their show in Edmonton, The RAA played songs from their past three albums yet they also teased songs from their forthcoming release. Already released singles “White Lights” and “Beacon Hill” seemed to be embraced by fans as they sang along. Unreleased songs excited the crowd and peaked their ears to what lies in the future of The RAA.

Despite, having elements of their structure changed The RAA delivered a performance that exceeded the expectations of many fans and proved that their Alberta influenced songs maintain relevance within the province.