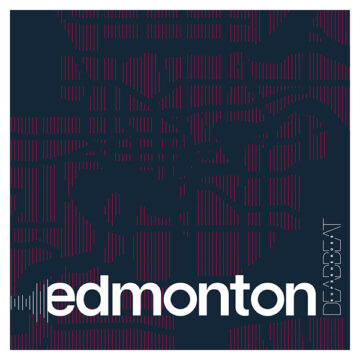 In 2011, guitarist Vikas Sharma and vocalist Ayesha Adhami joined forces for what would become the musical collective Deadbeat Superheroes. Fast forward to 2023, and Deadbeat Superheroes continue to make great music. With their current lineup they have released their fourth EP, Edmonton. Because it is a collective, changes have occurred over the years for the band. Most significantly, Adhami left in 2020  and Julie Sun Lee took over vocal duties for Deadbeats Superheroes. She fits right in with the band and the collective has produced a very strong EP full of very melodic and enjoyable pop rock songs. What makes this EP so good and interesting is the combination of sounds and influences. Clearly, Deadbeat Superheroes has their own distinctive sound but it is a sound that combines different sources.

For example, the EP kicks off with “Shangri-La”. It isn’t a cover of the classic Kinks song, but rather a fresh sounding track that hints at 1980s retro but doesn’t fall too deep in that sound. The group has many tricks up their sleeves. Rather, the keyboards and guitar combine to make a great opening which introduces the brilliant song. Lee’s vocals are perfect and the song brings  their listening audience to a new batch of songs from this very talented group of musicians. “Blind Luminescence” is next, which allows Lee to show off her violin talents (but in truth her violin adds a perfect layer throughout the EP), but once again, Marek David’s keyboards are perfect at setting the tone.

To these ears, “Silo” is the strongest song on the album. Lyrically, it is expressive and beautifully written. “Living in a self created silo. Staring at nothing but the past” is downright heartbreaking, but the music matches the stirring lyrics and the end result is an incredible song. It is work the price of admission alone, and yet there is still one more song. The EP ends with the lovely “By The Side Of The Road”, which features guest Stephen J. Horak (from The Laundronauts). His guitar work is perfectt for the song. It is a perfect closing track and the band come together to end the EP

A lot of credit should go to keyboardist Marek David who not only produced the EP, but arranged and recorded it. It sounds great and the arrangements are perfect for the songs. Deadbeat Superheroes have come up with a strong work and have produced four stellar tracks.

Perhaps the biggest problem with Edmonton is that it is too short. They grab your attention and one tunes in to their music and all too soon it is over. Deadbeat Superheroes (which is a great name) have the talent and skill to produce a full album. But until they come up with that long player, we will make do with the wonderful Edmonton.

Born and raised in Whitby, Aaron discovered music through his love of The Beatles. This led to a career in radio, writing for various publications, and ultimately a radio show about The Beatles (Beatles Universe), which ran for over four years. When not immersed in music, Aaron enjoys spending time with the loves of his life -- his wife Andrea, and daughters Emily and Linda (all of whom have an intense love of music too).
RELATED ARTICLES
album reviewalbum reviewsedmonton
8.0