SPILL BOOKS: ANDREW GOLUB – THE MUSIC BETWEEN US: CONCERT ADS OF DURAN DURAN 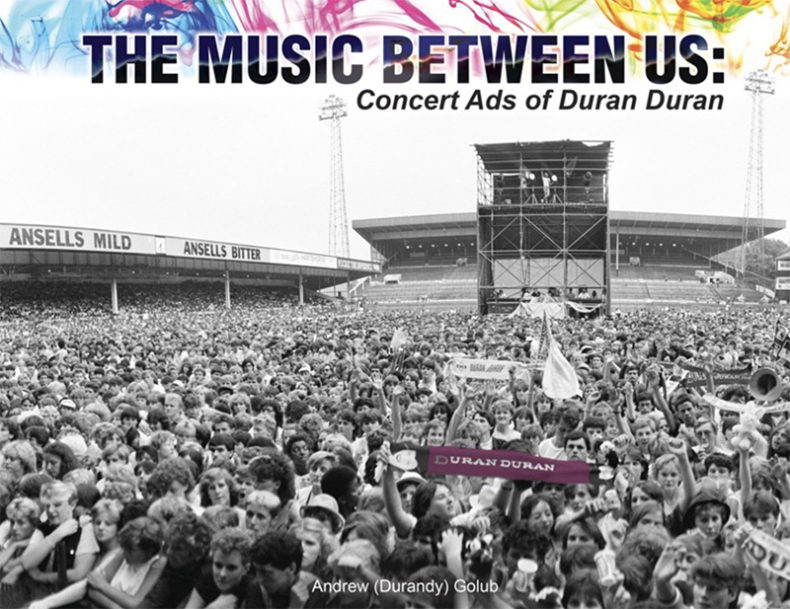 Andrew Golub – The Music Between Us – Concert Ads of Duran Duran

Duran Duran represent the ‘80s.  I think there can be no argument there.  They along with a few others, but as far as English New Wave, New Romantic or whatever label you want to use, Duran Duran do a very good job of representing that decade.  I know, they are still producing music and had hits outside of that decade, but they do come to mind when one talks about the ‘80’s.

Duran Duran were big, really big.   They had a number of hits, well into the the early 2000’s (Sixteen top 40 in the U.S. with nine making the top ten, and thirty hit singles in the U.K.).  But Duran Duran were more than hit singles, they were responsible for a Bond theme (“A View To A KIll”) and they produced some very fine albums (also charting very high in the U.S., Canada and the U.K.).  Further, Duran Duran toured.  They made themselves accessible to their fans and this endeared them into the hearts and minds of their fans.  They were huge and still available to the public.  That was a truly remarkable skill that few have mastered.

Andrew Golub is a fan.  He is well known in the Duran Duran fanworld, mainly for his rather extensive collection of all things Duran Duran.  This is his second book on Duran Duran (his first was Beautiful Colors – The Posters of Duran Duran) and he clearly has a great deal to show off to the world.  He also knows this subject extremely well.

In this book, Golub presents his collection of Duran Duran concert ads throughout the ages.  Interspersed throughout the book are written memories from fans.  I myself saw Duran Duran open for Bowie, and my own memory is that they almost stole the show, almost.  They put on one hell of a show and were it anyone but Bowie, they may have gotten away with it.  But that is just one memory.  The narrative throughout the book is heartwarming and serves as a reminder as to what this band means to people.  You can also see parents who grew up with the band introducing their children to the music in the 2000’s.

What I find even more interesting with this book is the design of the ads throughout the years, and how much pop/rock music changed.  It is a sociological view of the concert ad, using Duran Duran as the focus.  Very smart.  That may not be the intention of the book,but that comes through loud and clear.

The book is well organized into eras of the band, which again shows a band, and individuals.  This book is more than a labour of love, it is pure devotion to a band.  It is presented beautifully and even non fans would find this book of interest.  I was surprised to see how many tours/shows these guys did and the people with whom they played.  Again, it serves as a history of rock from the 80’s to present day.  It brings back a number of memories and of times past.  Well done, Mr. Golub.  Now our next books should be their seven inch picture sleeves from around the world.

Purchase The Music Between Us – Concert Ads of Duran Duran Via

Born and raised in Whitby, Aaron discovered music through his love of The Beatles. This led to a career in radio, writing for various publications, and ultimately a radio show about The Beatles (Beatles Universe), which ran for over four years. When not immersed in music, Aaron enjoys spending time with the loves of his life -- his wife Andrea, and daughters Emily and Linda (all of whom have an intense love of music too).
RELATED ARTICLES
booksduran duran