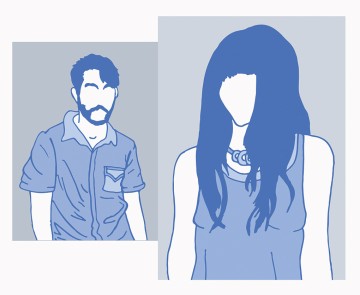 Musicians, like other artists, are sometimes daring enough to wander from their creative comfort zone – excited at the possibilities, yet unsure of what they will encounter. One such band is Toronto’s Brave Shores, whose 2013 synth pop hit single, “Never Come Down,” was chosen by Bell Canada to promote their Sony Xperia underwater phone. With the unexpected high-profile placement, the brother/sister combo of Jay and Stefanie McCarrol suddenly found themselves with the unique opportunity to fully explore a genre that was unfamiliar, yet wholly intriguing. Knowing that the road less traveled can present both hidden dangers and unexpected pleasures, the duo consciously chose to dive into a new musical world, one filled with synthesizers and drum loops. The result is Brave Shores’ self-titled debut EP, an infectious work that reflects the siblings’ wide-eyed exploration of an entirely new musical journey.

Jay McCarrol was working at a music post-production company in 2013 when he penned “Never Come Down,” a synthy feel-good blast of electro pop in the spirit of The Naked and Famous, MGMT, and CHVRCHES. He immediately knew that younger sister Stefanie would be the perfect choice to sing on “Never Come Down.” According to Jay, “Stef nailed her parts in half an hour, and our sound was born.”

After the made-for-TV single was picked up by Bell Canada, “Never Come Down” quickly caught the attention of online music fans and turned heads at Universal Music Canada. Very suddenly, the McCarrol siblings and their songwriting skills were in demand. This unexpected interest inspired Jay and Stefanie to collaborate on more songs, and soon after, Brave Shores was a living, breathing band.

Brave Shores’ music is fun. According to a recent review by music blog When the Gramophone Rings, Brave Shores create “pop tunes that are deep and colourful, sparkly yet strong, showing light and shade.” Each track from their self-titled debut EP displays a variety of inspirations: There are surf guitar trills, chunks of gritty distortion, and layers of stylized harmonies. It is no surprise that their video for “Never Come Down” has become a Much Music favorite and has garnered over 33,000 views on YouTube.

Jay and Stefanie have also shared the stage with some of Canada’s most talented acts, including Leslie Feist, Hayden, Zeus, and pop punk favourites, The Golden Dogs. Brave Shores were invited to the 2014 Pop Montreal Festival and opened for Rich Aucoin this past summer. They will be opening for Canadian favorites Big Data this December.

For their Brave Shores EP, the McCarrols pushed themselves to “make fun and upbeat pop music that sounds really cool.” According to Stefanie, “the real challenge was to make pop music that we actually liked.” After meticulously crafting all aspects of Brave Shores, both Stefanie and Jay believe they have succeeded in meeting their self-imposed demands.

Brave Shores’ debut is not the hushed whisper of two hesitant strollers meandering down an unknown path; instead, it is the triumphant sound of dual creative forces sprinting unabashedly into a new and exciting world.