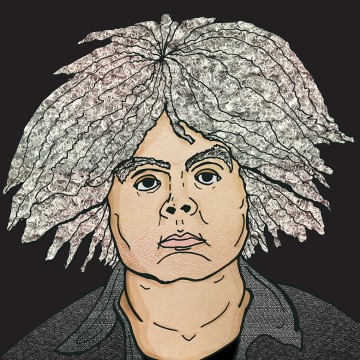 Melvins are a three piece right now, the current members are Buzz Osborne (King Buzzo) who plays guitar and sings his given first name is Roger so I’ve heard, Dale Crover who plays drums, and Kevin Rutamanis who plays bass. The Melvins formed in Aberdeen/Montesano, WA in 1984 the founding members were Buzz, Mike Dillard (drums), and Mudhoney bassist Matt Lukin. Buzz, Mike, and Matt all went to high school in Montesano. When Mike couldn’t cut it, as rumor has it because the songs were getting too mathematically complex, Dale was recruited out of the Iron Maiden cover band he played in at the age of 15. Matt was replaced by Lorax (Shirley Temple’s daughter) when they left Aberdeen for San Francisco. The name Melvins came from a grocery clerk at the Thriftway in Montesano where King Buzzo served as clerk and vandal. Melvin was the most hated fellow employee and they felt it to be an appropriately ridiculous name. The Melvins have had quite a few bass player changes during their tenure check out the bassist morgue to learn more. The Melvins live in Hollywood, CA right now. Check out the discography section to see the many releases the Melvins have made. They were on a major label Atlantic Records for three albums, although most would agree they’re not the type of band that would appeal to a major label. They knew this while they were being signed and just took advantage of the hullabaloo the record companies were making out of the Seattle “grunge” sound. Dale filled in for Nirvana when they were between drummers and he appears on Incesticide and Bleach as a result of those sessions. Buzz has a side project called Fantomas with Mike Patton(Faith No More/Mr. Bungle) who is also owner of Ipecac Recordings the label the melvins are currently releasing material through. Melvins have also released music on Boner records, Alchemy Records, Amphetamine Reptile Records, and numerous others in the manner of 7″s and whatnot. Dale has a side project called Altamont. Kevin used to be in the band COWS, he also is in another Mike Patton project along with Duane Denison of the Jesus Lizard called Tomahawk. I would completely recommend anything a Melvins member has released. Melvins have toured with Kiss, White Zombie, NIN, L7, Primus, Tool among others and were also on the Ozzfest tour in 98. They toured with a second guitarist at one point David Stone(a great noisician). If you ever get the chance to see them live be sure to give them gifts, they prefer Cracker Barrel gift certificates.