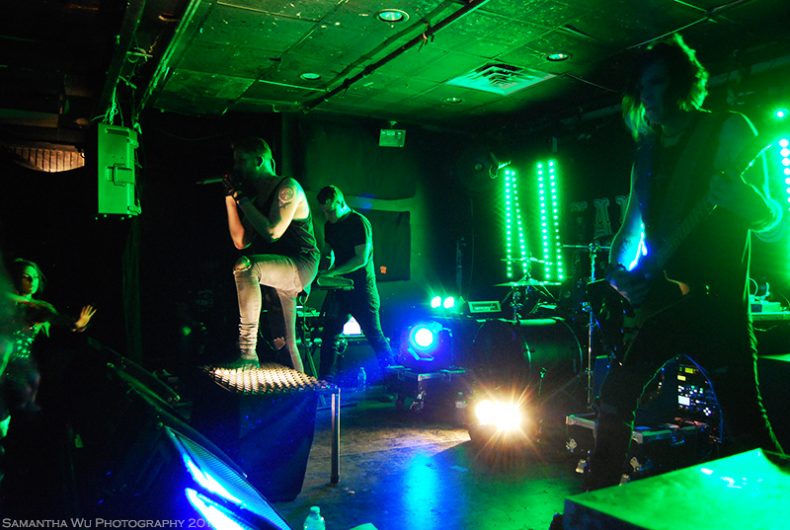 Kicking off their North American tour in celebration of their latest album Ascending the Abyss set to be released later this year, Dutch aggrotech band Grendel lit up the dance floor at the Hard Luck Bar in Toronto tonight. Playing an electrifying set filled with fan favourites and new selections, they launched their new tour with one exhilarating show.

In anticipation of the new tour, Grendel released a special EP entitled Brace the Storm only available during their shows. They started off their set with “Caught in the Middle” from the new EP while also playing the title track “Brace the Storm” – a deeply introspective and emotional track. The crowd loved every moment, stomping their hearts out on the floor. The tracks off the new EP are definitely not as hard as what Grendel are known for – such as “Glass Under Feet” which is rather reminiscent of early Nine Inch Nails – but that certainly did not deter people from embracing the new material wholeheartedly.

More than happy to give the crowd the hard and aggressive tracks they want, Grendel delivered hit after hit from their long-standing discography including “Timewave Zero” and “Chemicals and Circuitry”. The band placed so much energy into their performance and the crowd making for a show to be remembered. The audience threw their minds and their bodies into the music on the floor, eating every moment up.

Each song sounded incredible, no matter where you were in the venue. Vocalist JD Tucker was definitely in top form throughout the night engaging with the crowd and he often quipped about grabbing the quintessential Timmies in between songs.

Further adding humour to the show, during their performance of “Conflict Instigation”, the band took a detour from the progressive driving force of the track for Tucker to dive into a much unexpected rendition of George Michael’s “Careless Whisper”. Of course, the crowd loved it.

Grendel closed off their show with a call to arms playing “Soilbleed” for their encore, who made it a point to not leave the stage prior to the encore. The crowd loved the infectious militant call and response track which proved to be the perfect way to end the night – an outstanding kick off for their new tour.

Samantha is both a writer and a fan of the arts and has been able to find numerous ways to pair the two. Eager to dive head first into writing for Spill, Samantha is an avid partaker and reviewer of live art in Toronto serving as an editor at Mooney on Theatre exploring live local theatre, she's a photojournalist for Go Globehopper, a travel, dining and tourism blog that focuses on Toronto and abroad and previously for Lithium Magazine. She's passionate about music, theatre, photography, and writing -- not necessarily in that order. She drinks tea more than coffee, prefers ciders over beers, and sings karaoke way too loudly. You can follow her on various social media including Facebook, Twitter, and Instagram.
RELATED ARTICLES
live reviewthe hard luck bartoronto