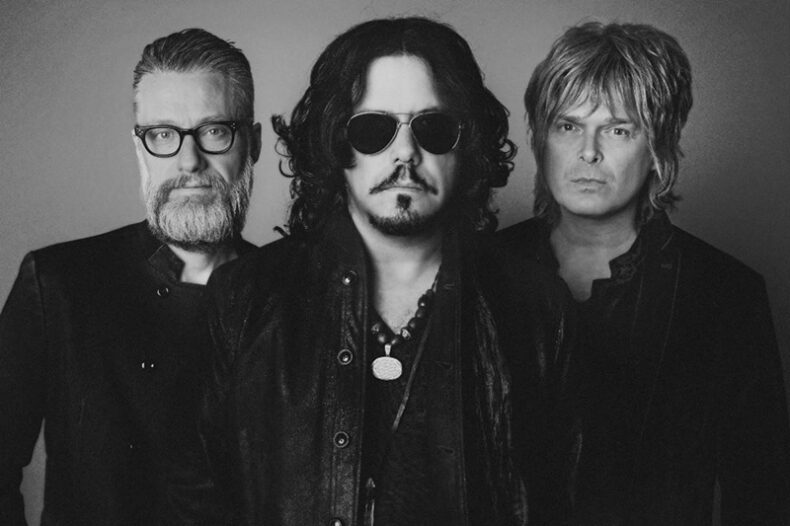 Multi-Platinum selling and multi-JUNO award-nominated Rock band The Tea Party announce their return to Canadian stages with their first tour in almost three years. The tour kicks off in Waterloo, ON on June 17th, sees the band play 19 shows, and wraps in Kelowna, BC on August 6, 2022.

2021 saw the release of The Tea Party’s Sunshower EP, a companion piece to the 2019 Black River EP, that once again showcases their mastery of light and shade, and why they continue to occupy a unique place within the ever-changing musical landscape. The EP presents a message of hope in the face of one of the most challenging years we as a society have endured so far in the 21st century.

“The Beautiful”, a track off the Sunshower EP, is currently at Canadian radio. You can stream the single below or HERE.

“3 years is a long time…The band is incredibly excited to get back and perform in front of the best fans in the world,” said Jeff Burrows (drummer/percussionist). “This summer will not only invigorate fans of live music around the globe, but the bands as well. The Tea Party plans on taking full advantage of that, and looks forward to blowing minds across this great country.”

Since releasing their major-label debut album Splendor Solis in 1993, The Tea Party, composed of Jeff Martin (singer/guitarist/multi-instrumentalist), Jeff Burrows (drummer/percussionist), and Stuart Chatwood (bassist and multi-instrumentalist), have come to be regarded as one of the world’s most innovative rock bands, with a sound that incorporates everything from traditional instrumentation from around the world, to cutting-edge digital technology.

Over the past three decades, the trio has gained the attention of fans on a worldwide level, with record sales approaching 3 million units, over 50 million career streams to date, receiving 14 JUNO Award nominations and 22 MuchMusic Award nominations, and touring around the globe. Now, after more than 30 years as a band, The Tea Party is ready to open a new chapter in its saga, a story that remains rooted in the goal to create new, ambitious, and thought-provoking music.

SPILL NEWS strives to keep our readers up to date with news and events in the music industry. We keep you informed of the most recent information regarding new releases, tour dates, and information items about your favourite artists.
RELATED ARTICLES
coalition musicnewssunshower
7.0

by Michelle Cooney on November 26, 2021
THE TEA PARTY SUNSHOWER COALITION MUSIC/WARNER MUSIC CANADA Canadian rock trio The Tea Party offer something different with their new EP Sunshower. Well-known for their dark and moody [...]
8.0

by Samantha Stevens on November 19, 2021
USS The Science And Artfunkel Victory Lap Coalition Music USS might be heading out on their Final Freakquency tour, but that didn’t stop them from dropping the surprise [...]