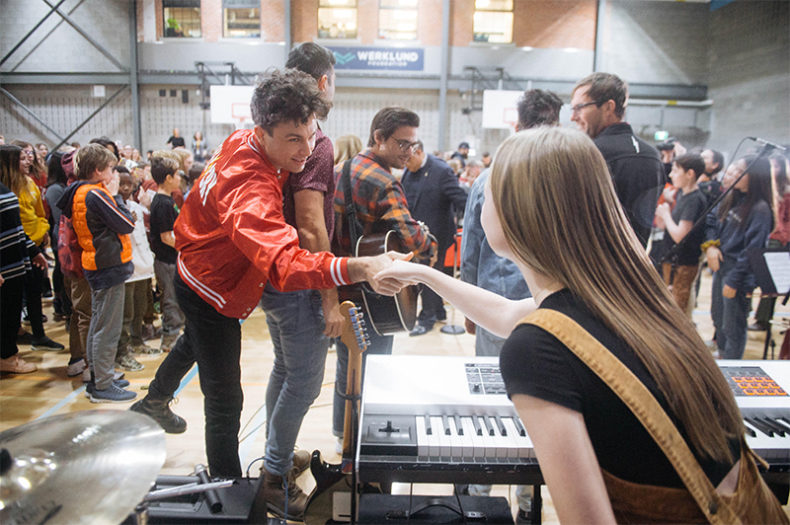 “MusiCounts was impressed with the passion, skill and student engagement Calgary Arts Academy demonstrated with their cover of ‘People’s Champ’,” said MusiCounts Executive Director, Kristy Fletcher. “It was inspiring to see the performance come to life with Arkells today. Thank you to Arkells and Mayor Nenshi for joining MusiCounts in presenting the school with new instruments that will benefit generations of students.”

Currently on their nationwide Rally Cry tour, Arkells treated the auditorium to an acoustic performance of their #1 smash “Knocking At The Door”, followed by a Q&A with the excited students before unveiling the new instruments for their program.

“Thank you to the students from Calgary Arts Academy for that amazing performance of “People’s Champ” – it blew us away!” said Arkells frontman, Max Kerman. “We were thrilled to join MusiCounts to celebrate the importance of music education, and present the school with new instruments that will inspire students to continue to create.”

Each year, CBC Music in association with MusiCounts hosts the Canadian Music Class Challenge to engage music classes from across the country. Classes are challenged to perform a video cover version from a list of Canadian songs, with 2018 seeing over 1,000 entries.This year for the first time, classes had the chance to win the MusiCounts Passion Prize – a $5,000 MusiCounts Band Aid Program instrument grant for the class that showed the most passion for music.

Video clips from the surprise can be found on socials @MusiCounts and @ArkellsMusic.

Arkells latest studio album Rally Cry is the band’s most pointedly powerful effort thus far. Long known for their exceptional songwriting and high-energy performances, the Hamilton, ON-based quintet – singer Max Kerman, guitarist Mike DeAngelis, bassist Nick Dika, keyboardist Anthony Carone, and drummer Tim Oxford – reveal on Rally Cry an unheard soulfulness that elevates their new songs to places that, while connected to a new approach, feel perfectly in tune with who the band is and always has been. Rally Cry has the size and scope to match Arkells’ ambition and ever-growing audience that love the band for the uniquely raw energy that is all their own.

Arkells have remained ever-present, relentlessly touring in support of their last album, Morning Report, which was extended by the surprise release of “Knocking At The Door” – the 14-week #1 smash, which became the most played alt-rock song of the year. The album yielded festival stops from Coachella to Lollapalooza, an unexpected viral trip to the Olympics in South Korea, and their show-stopping, stadium-filled hometown show “The Rally,” in front of 24,000 fans this summer. In winter 2019, Arkells will embark across Canada on an arena tour in supportof Rally Cry with very special guests, Lord Huron, before bringing their headline run to the USA.

MusiCounts, Canada’s music education charity associated with CARAS and the JUNO Awards is keeping music alive in schools and communities across Canada by putting musical instruments into the hands of children that need them most. MusiCounts’ mission is to ensure that youth in Canada have access to music programs through their schools and communities. MusiCounts celebrates musical excellence and achieves its mission through its Band Aid Program, the MusiCounts TD Community Music Program, the MusiCounts Teacher of the Year Award, MusiCounts Inspired Minds Ambassador Award, Scholarships and other music education initiatives.

MusiCounts is funded by many of Canada’s most dedicated individuals and corporate citizens including and especially The Leadership Circle, TD Bank Group, Bell Media, SiriusXM Canada, the Slaight Family Foundation, Canada’s Great Kitchen Party, and The London JUNO Host Committee. MusiCounts has been supported since inception by Sony Music Entertainment Canada Inc., Universal Music Canada, Warner Music Canada Ltd., JUNO Songwriters’ Circle and JUNO Cup. MusiCounts was established in 1997, and has awarded over $11,000,000 in support of music education in Canada. These funds have benefitted over 1,000 schools and communities, supported over 350 post-secondary music program graduates, and honoured 13 extraordinary music teachers and two MusiCounts ambassadors.

SPILL NEWS strives to keep our readers up to date with news and events in the music industry. We keep you informed of the most recent information regarding new releases, tour dates, and information items about your favourite artists.
RELATED ARTICLES
arkellscalgarymusicounts