SPILL FEATURE: GET BACK: THE BEATLES ROOFTOP CONCERT – 50 YEARS LATER 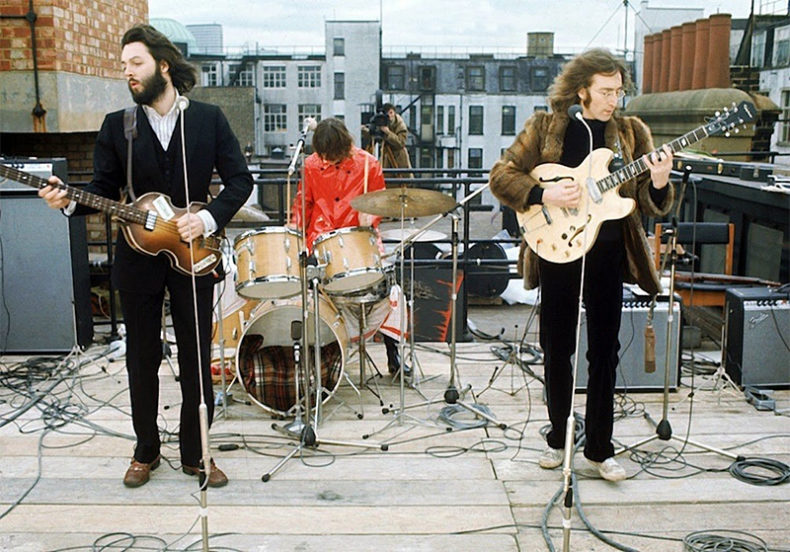 With extreme pressure from both the press and the public, the Beatles decided to stop touring after its August 1966 show at San Francisco’s Candlestick Park.

“There was no enjoyment in it”, said John Lennon. “The music wasn’t being heard. It wasn’t doing anything; it was just a sort of freak show. The Beatles were the show and the music had nothing to do with it. As we were musicians, we felt that if we’re going to be Beatles, the only reason to be Beatles is to make music and not be in a circus”.

After deciding to focus strictly on composing and recording, the Fab Four would go on to produce some of the greatest pop records ever made. First up was the psychedelic “Strawberry Fields Forever”, which opened the door for the masterful Sgt. Pepper’s Lonely Hearts Club Band. This album, often ranked among the greatest of all time, changed the landscape of what could be done in the studio, a completely unexpected move from a group of pop stars in their twenties.

Following the June 1967 release of Sgt. Pepper’s Lonely Hearts Club Band, the Beatles had officially cemented its place as the top composers in pop music. They were no longer the teen idols that had appeared on The Ed Sullivan Show just three years earlier.

“When we first started, we were the nice clean mop tops”, said Ringo Starr in Ron Howard’s 2016 documentary, Eight Days a Week. “Then suddenly there’s a few things that they don’t understand…it’s just that we’re men now. We’re a bit older. We can’t go on forever as four mop-tops playing ‘She Loves You’”. 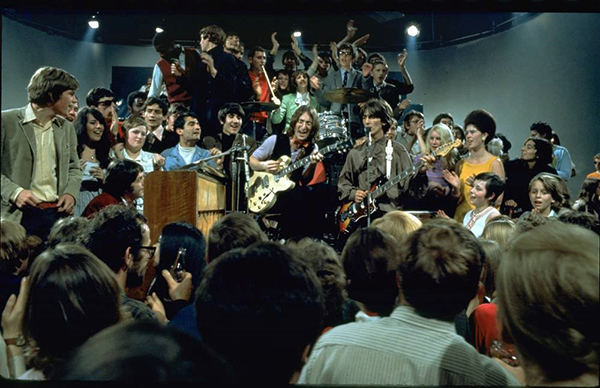 The Beatles continued to experiment with psychedelic pop structure and studio trickery for the remainder of 1967, recording songs that would have been impossible to recreate live at the time. However, after the release of Magical Mystery Tour in November of that year, the band slowly began getting back to basics.

The following spring they entered Abbey Road Studios and began working on what would become their self-titled double LP, later dubbed The White Album. Recording up to 12 hours per day, it was here that tension began to build in the group. Lennon stormed out of the studio after an argument during the “Ob-la-di, Ob-la-da” session, while Ringo quit the band for two weeks after a fight with Paul over his drumming technique. When finished, the album was somehow another masterpiece, albeit a seriously disorganized one.

Despite growing tension in the band, it decided to push on through. During its September 1968 performance on David Frost’s television show, its first in front of a live audience in two years, the Beatles began to crave the atmosphere of a live show.

The Beatles set up a date in January to perform at London’s famous Roundhouse. It also decided to document the tremendous occasion with a television film, and hired Michael Lindsay-Hogg to direct the proposed “Get Back” project. The film was also meant to document the Beatles’ return to roots rock.

“I don’t want any of your production shit”, Lennon supposedly told producer George Martin. “We want this to be an honest album…I don’t want any editing…overdubbing. We just record the songs and that’s it”.

When the band set up for rehearsal on January 2, problems that plagued The White Album reared their ugly head again. Lennon, Harrison, and Starr began to resent Paul McCartney for dictating the musical direction and what notes to play.

“Paul would be rather overbossy, which the other boys would dislike”, producer George Martin told Rolling Stone in 2009. “But it was the only way of getting together…It was just a general disintegration”.

The abrasion of these sessions is quite obvious when looking at the film, which was later titled Let It Be. Harrison’s attitude was that of someone who could care less about being there, perhaps distracted by the upcoming live show they were aiming toward. Harrison, being an early advocate for their withdrawal from touring, was dead set against their Roundhouse concert which had, by then, fallen through. The Sahara Desert, Greek Coliseum, and the Great Pyramid of Giza were suggested as other possible locations by Lindsay-Hogg.

Harrison also became annoyed with Lennon’s partner, Yoko Ono, who was not only present for every session but also added her input. Eventually this led to a Harrison/Lennon brawl in the middle of a session, after which Harrison announced he was quitting the band and left with his Rosewood Fender Telecaster.

Two weeks after Harrison’s walkout, the band, along with Harrison, resumed its sessions in the basement of its Apple Records headquarters. Keyboardist and old friend Billy Preston was brought in to ease up some of the hard feelings. With time running out on the film project it was clear that there was no time left to plan a comeback concert, which Lindsay-Hogg had planned as the film’s ending.

On January 29 it was suggested, by whom is not entirely known, that the Beatles stage their concert on the rooftop of their Apple office. It was a simple understatement that complemented the back-to-basics rock they were playing. While definitely a statement, it wasn’t exactly an original idea. The decision may have been influenced by the Jefferson Airplane rooftop concert in Manhattan just two weeks prior. Of course now, five decades later, the Beatles’ performance is regarded as far superior, and has achieved legendary status.

The weather on January 30 in London was miserable: winds were high and the temperatures reached a low of seven degrees Celsius. In order to keep warm for the concert, both John and Ringo wore their significant others’ coats, though looking back at the styles of the time, it isn’t really noticeable that they are wearing women’s garments. 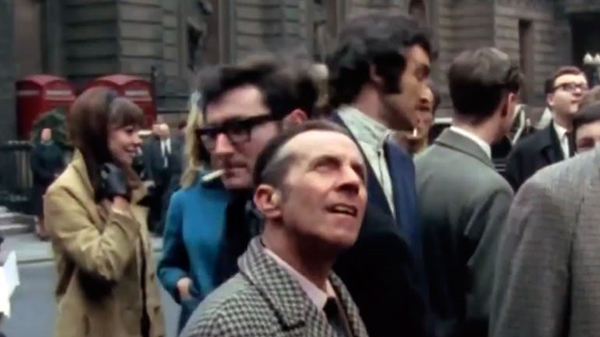 SHOT OF THE AUDIENCE ON THE STREET BELOW, GAZING CURIOUSLY AT THE EVENT.

The miserable weather also posed problems for the crew members setting up the equipment. To keep the wind from interfering with the sound, engineer Alan Parsons covered the microphones with pantyhose, then used extension cables to connect them to the tape machines in the building’s basement.

“They announced it just the night before”, Parsons told Guitar Player in 2015. “It was just, ‘Let’s go up on the roof tomorrow morning’. So we worked late into the night to get it happening. Part of my job was to run multiple cables from the basement up to the roof”.

The Beatles, along with Billy Preston, opened with the upbeat roots-rock number “Get Back” and stunned the passersby shopping in London’s high-end fashion district. Both young and old pedestrians gathered and gazed up in amazement. There had been no prior advertising for the show, which for a band of their magnitude was astounding. If nothing else, their first show in over two years was a humble gesture to fans and the curious Savile Row viewers below.

Throughout the performance, which clocked in at 42 minutes, we see the four Beatles actually enjoying themselves. While it’s obvious that the performance lacked rehearsal, the spontaneity of the event is what makes it gratifying. This was the performance of a newly-invigorated group, which was evident not only in its playing but also in the lighthearted performance. John and Paul make jokes, dance and clown around, forget lyrics and substitute in gibberish instead. Even stone-faced George cracks a few smiles. Watching the performance, it is hard to believe that the band is splitting apart at the seams. 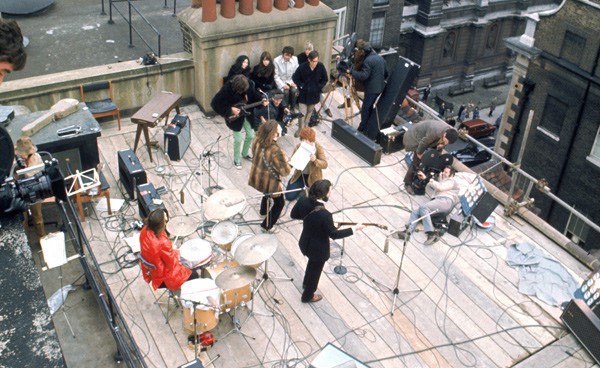 After receiving noise complaints (for once you could hear them with the lack of pre-pubescent females in attendance) the Beatles was forced to shut down the performance prematurely but launched into a third take of “Get Back”. It was this version that made the cut on Let It Be, the one where John famously jokes, “I’d like to thank you all on behalf of the group and myself and I hope we passed the audition”.

It was the last time the Beatles would ever perform in public.

The performance was one of those magical moments in rock history and served as the perfect ending to Lindsay-Hogg’s film, which would be released in May 1970. Unfortunately the magic ran out shortly thereafter.

The Beatles continued to record music until August of 1969 and assembled the album Abbey Road for a September release. Shortly after its release, McCartney tried to persuade Lennon to get back on the road for another tour. The suggestion was met with hostility from Lennon, who immediately shot the idea down, calling his songwriting partner “daft”.

As the friction between group members grew too intense, they struggled to piece together Let It Be. Iconic producer Phil Spector was brought in to add the highly controversial final mix and put the final touches on the record. His lush string arrangements, particularly on the McCartney numbers, “The Long and Winding Road” and the title track, were met with resentment from their composer. McCartney demanded that they be removed but it was too late. When the lavish arrangements made the final cut, he announced his departure from the band on April 10, 1970. 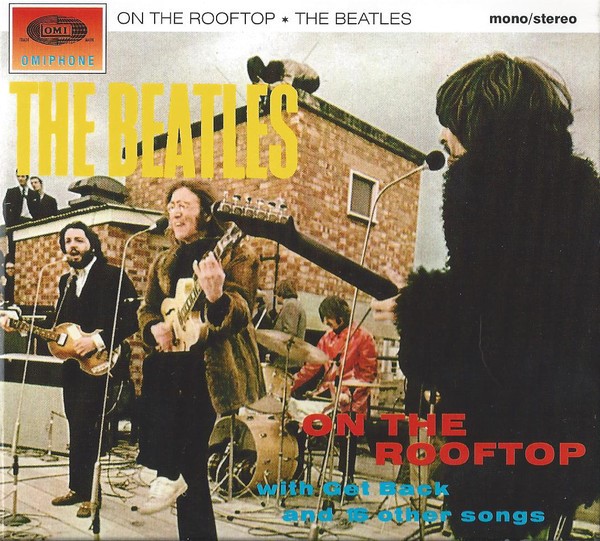 ON THE ROOFTOP COVER, A GERMAN BOOTLEG CD. RELEASE DATE IS UNKNOWN.

When Let It Be was released the following months, it was met with mixed reviews from critics as well as long-time Beatles fans. The less-than-stellar selection of songs, not to mention the overly-produced McCartney numbers, seemed like a puzzling way to end a decade of brilliance. The band’s real swan song had been both Abbey Road and its final performance on the Apple Records rooftop.

Nearly 25 years later, the rooftop concert was honoured as well as spoofed in The Simpsons’ fifth season. Homer’s barbershop quartet, the Be Sharps (Homer, Apu, Barney, and Principal Skinner) plays a reunion concert on the rooftop of Moe’s Tavern. George Harrison, who was a guest star in the episode, drives by and dryly mutters “It’s been done”.

The low-key rooftop concert is, in a way, the antithesis of Woodstock, the three day music festival which would take place that summer.

It was a bittersweet departure for the greatest pop group the world has ever known, but their energy in this show transcends the drama of their breakup.

Fifty years on, their rooftop concert is by far their best. After all, this is the only Beatles concert where you can actually hear it play.

As a child growing up in the suburbs, Ryan found music as a way to soothe his boredom. After first hearing AC/DC at the age of 10, he was hooked on music. Tracing its roots to the ‘50s, he became obsessed with Elvis, Buddy Holly and Chuck Berry. Somehow that led to grunge, then psych-rock, then jazz, etc. The list goes on and on and his collection of vinyl records continues to grow.
RELATED ARTICLES
don't let me downfeaturesgeorge harrison