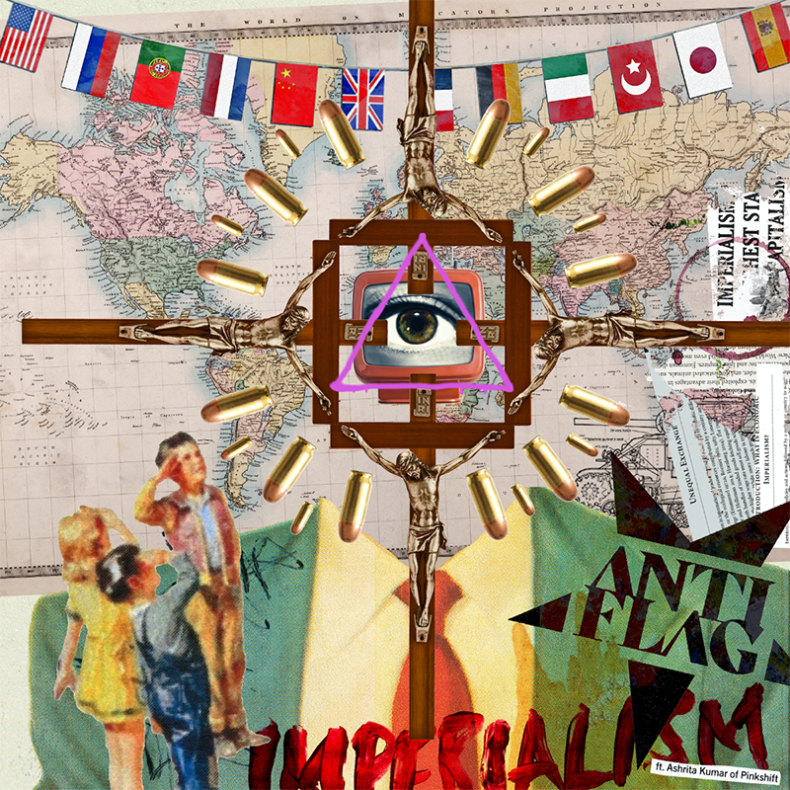 For this record, the band recruited several high profile and like-minded artists to feature on the songs. Ashrita Kumar of Pinkshift appears on “IMPERIALISM.” Listen HERE.

Justin Sane’s father Martin Geever grew up in post-colonial Southern Ireland. When he talks about the British occupation of his homeland and its lingering negative consequences, a phrase that often repeats is: ‘Humans are just out of the cave.’

“A quick glance at imperialism the world over makes it hard to argue with this assertion, especially when one takes into account the brutality that accompanies imperialism and the ravages it leaves in its wake. Not to mention the frequency with which powerful elites justify subjugating and stealing from other people to grow their power and wealth

This song documents the false narrative often put forward by those who wish to validate their imperialist ambitions. Special attention is given to the fact that occupiers play by a set of rules that they create, ignoring or moving the goalposts in terms of international law and human rights, including torture and murder. Special effort was also made to point out that occupiers have no interest in the needs or opinions of the occupied.

You can’t smash a city with bombs, kill and terrorize its population and burn it to the ground in order to save it. But those are the tactics and explanations of those with imperial ambitions. Actions speak louder than words, especially when there is a trail of bodies left in the wake of an occupier claiming that the violence they have perpetrated was carried out on the basis of high moral grounds.

Musically, there was something important to us about making sure the future of empathetic and benevolent punk rock was involved. One of our favorite new bands Pinkshift are that future. Ashrita had the perfect voice and energy for this song and its intention and we’re grateful for her talent and friendship. The accompanying video created by INDECLINE stands as a document of the extremely violent, destructive and terror-filled nature of war and occupation, regardless of where it takes place.

For the lyrics and essay about the track, click HERE.

Lies They Tell Our Children was recorded, produced, and mixed by Jon Lundin.

SPILL NEW MUSIC strives to keep our readers up-to-date with new releases by your favourite artists, keeping you informed of new album, single, and video releases. Stay tuned -- who knows, you might just discover your new favourite band.
RELATED ARTICLES
anti flaglies they tell our childrennews

by SPILL NEWS on March 20, 2022
ANTI-FLAG ANNOUNCE CANADIAN TOUR DATES FOR 2022 WITH BILLY TALENT & VULGAIRES MACHINS This year Pittsburgh-based punk rockers ANTI-FLAG will be taking Canada by storm. The band are playing shows in Western Canada with Billy Talent in May and [...]
7.0

by Michelle Cooney on January 17, 2020
Anti-Flag 20/20 Vision Spinefarm Time-honoured Pittsburgh political punks Anti-Flag have presented an eye-opener with their new record, 20/20 Vision. Their 12th studio album is of course as politically charged as one would expect after two [...]