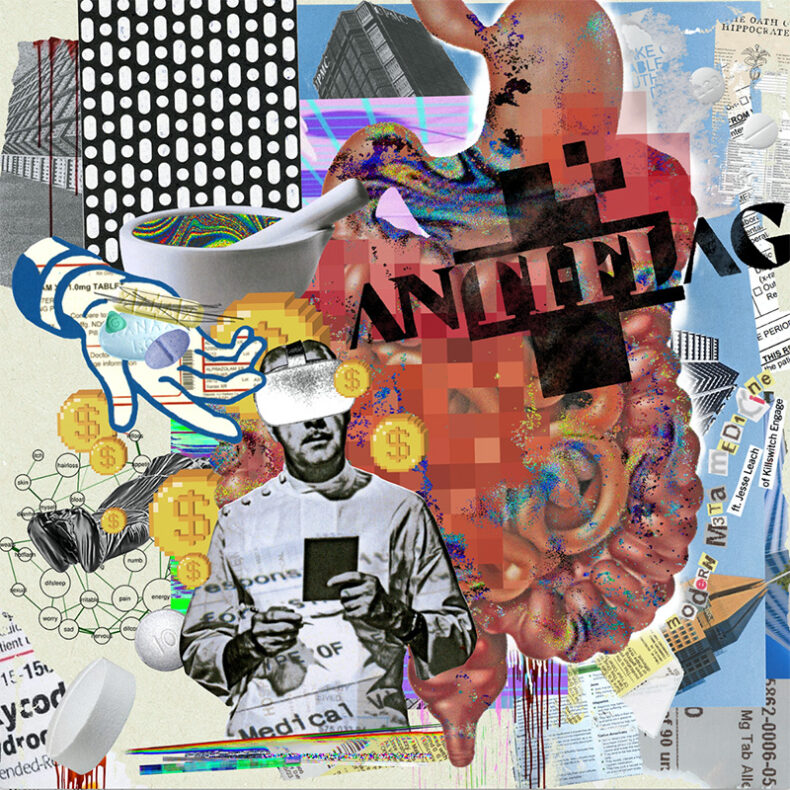 NEW ALBUM LIES THEY TELL OUR CHILDREN OUT JANUARY 6

Incendiary Pittsburgh punk rockers ANTI-FLAG will release their 13th album Lies They Tell Our Children January 6 via Spinefarm. Pre-order it HERE. A limited-edition, olive-green vinyl version of the album is now available. For this record, the band recruited several high profile and like-minded artists to feature on the songs.

“Let’s be honest, in a world and cultural climate that reaps division and sows a void of nuance in our conversations, writing a record that challenges a healthcare system that puts profit before people can be scary,” the band says. “But an opioid crisis, miracle cures for our weight, our skin, the hair on our heads, a limp dick, and then the simultaneous denial of access to healthcare for the bodies of pregnant people, the poor, Black and immigrant communities is a stark contrast that must be discussed.

“At the crossroads of where business models and our healthcare intersect, the for-profit model has beyond proven it is unsustainable. And the fact that these corporations have preyed openly upon the most vulnerable in our society with very little push back has only opened the doors wildly for the conspiracy theorist, instead of allowing us to globally celebrate science, progress and the advancements of our healthcare.

“MODERN META MEDICINE‘ looks to trace back the origins of capitalisms takeover of our health as global citizens, the Reagan era policies that allowed for billionaires to flourish off of the suffering of so many. Healthcare is a human right, and we need to steal our rights back from a machine that sees us as commodities and profit margins, however we can.

“We are grateful to Jesse Leach from Killswitch Engage for lending his talent and empathy to this track. Since becoming friends we’ve had a few great conversations on this topic so we knew he would be perfect for this and holy shit did he deliver.”

For the lyrics and essay about the track, click HERE.

INDECLINE, who shot the video, also commented, “In a feedback loop of self-referential information, it’s hard to sort out any kind of accountability. The moment of epiphany is often washed away in the tidal wall of think pieces, hammering truth into sophistry, our sense of identity into marketing campaigns. Music is powerful, like all art, because it hinges on the truth of the moment, something felt first. We feel, personally, that health is the point of being alive, not a luxury good to keep the markets accelerating toward a concentration of wealth in the hands of an emerging class of cynical billionaires, who would burn the planet to build their rocket ship out of here.

“The Black Panthers understood that health is the first step in community, and community is the first step in change. We won’t argue about resources; in a world of cruel excess, we are sure that a little organization and empathy in the dispensation of what we already have would make a difference in the quality of life for everyone. So, imagine a world in which quality was preferenced over quantity. Or rather, over empty dollar signs. Imagine measuring our markets in the effect they have on those who participate in them instead of the intangible math of growth. We would have a different health care system in that world. What would it look like?

“‘First, ‘do no harm’ has never been an excuse to do nothing. It is a challenge to think about the deeper consequences of how we dispense care. It doesn’t cost us anything to think about it, but it costs an awful lot not to. We are grateful to Anti-Flag for giving people music that allows them to think about what really matters. This is actually a love song. But the love is available equally, for everyone who is willing to accept it. That’s our hope for health care, too.”

Lies They Tell Our Children was recorded, produced, and mixed by Jon Lundin.

by SPILL NEWS on March 20, 2022
ANTI-FLAG ANNOUNCE CANADIAN TOUR DATES FOR 2022 WITH BILLY TALENT & VULGAIRES MACHINS This year Pittsburgh-based punk rockers ANTI-FLAG will be taking Canada by storm. The band are playing shows in Western Canada with Billy Talent in May and [...]
7.0

by Michelle Cooney on January 17, 2020
Anti-Flag 20/20 Vision Spinefarm Time-honoured Pittsburgh political punks Anti-Flag have presented an eye-opener with their new record, 20/20 Vision. Their 12th studio album is of course as politically charged as one would expect after two [...]