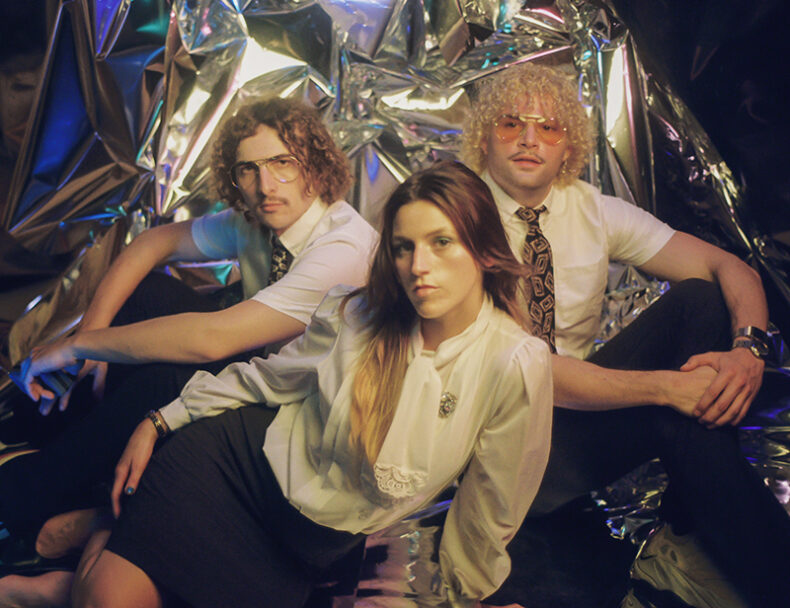 Great Time doesn’t want to fit in a box. Living up to their name, the band just wants to have a great time making music that they love. Tired of being advised to “pick a lane” by some of their industry peers, Great time set out to create music that celebrates their wide-ranging sound, incorporating genres from synth-pop and electronic to jazz, punk, rock and R&B.

Prior to the first single, 80z Slo Jam, on the upcoming album Live In Philadelphia, their most recent releases are a series of EPs titled “Sounds Like ____”. The band had the idea to turn the EP titles into a Mad Libs type of game “so that someone could put their own adjective or descriptor for the EP in the blank space,” explains singer/multi-instrumentalist Jill Ryan. The projects explore some of the different sounds and styles that influence Great Time. “Some people thought [our 2018 debut LP] ‘Great Album’ was all over the place, so with the ‘Sounds Like’ series, we decided to lean even further into our multi-genre tendencies and place the option of categorizing or putting us in a box on the listener.”

True to their vision, each EP carries a different sound. On Vol. 1, Great Time create a blissed out atmosphere, with R&B and neo-soul melodies. For Vol. 2, the band zones in on its electronic and pop influences, creating a livelier soundscape that feels ripe for dancing. Whereas Vol. 3 shows a guitar-heavy, more traditionally rock-influenced side to the three-piece group, with individual tracks ranging from punk to acoustic folk.

With their “Sounds Like _____” EP series completed, Great Time‘s next project is a live album that features the new material, allowing existing fans and new listeners who haven’t had the opportunity to see them perform yet enjoy how the band stunningly transforms their songs for live performances.

Great Time are so excited to be sharing “Feather (Little Dragon Cover)” ,  the next single from this project, out now!

Here is what the band has to say about the track: “Our biggest musical influence collectively is a band from Gothenburg, Sweden called Little Dragon. We admire how they manipulate sounds and bring a soulful, natural essence to electronic synthesizer music. I feel both a sense of strength and lightness when I hear ‘Feather’ and performing it live recently has been our way of paying homage to this band that we look up to so much.” ~Jill Ryan

by Alex Nguyen on December 7, 2021
Little Dragon Drifting Out Ninja Tune Little Dragon’s last full-length album, New Me, Same Us, was released in March of 2020. It was held back in its early days, preventing the band from taking the project on tour. The band released the New Me, [...]