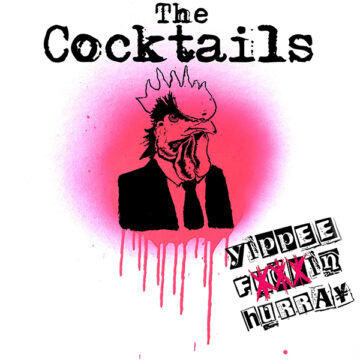 Hot off of reaching the semi-finals of 97.7 HTZ FM’s annual Rocksearch competition, Niagara, Ontario’s The Cocktails are one of the provinces coolest punk outfits. Almost an exact year to the date of the release of their explosive debut album, Viva La Juicy, the band has returned with their follow-up record, Yippee F’in Hurray, an explosive full-length, ten track album that sees the power-trio dig equally as deep into their ‘90s punk and alternative roots.

Opening with the rhythmic riffing of “Love Letter”, The Cocktails kick off Yippee F’in Hurray into high gear with a song that feels immediately nostalgic. Imagine if The Offspring and Green Day collaborated on a track and you’d have “Love Letter”, a song that builds in dynamics and tone as the song escalates with thrashing drums, bass runs, and elevated vocals until it comes to a climatic conclusion. The albums energy continues with the driving “Who’s Dangerous” and the heavy groove of “BangArang”.

Clocking in at just under thirty minutes, The Cocktails rarely linger as they blast through tracks with reckless abandon; however, there are several special moments throughout Yippee F’in Hurray. The sleazy riff of “Canady Glass”, along with the trading of licks between the guitar and bass and the Tom Morello inspired solo, makes for a definite highlight that connects The Cocktails’ sound to alt-rock bands like Royal Blood and Queens Of The Stone Age. Similarly, “Curses” is an absolutely rips and shines for a particular vibe in Anthony Botting’s haunting vocals that feels reminiscent of Scott Weiland’s heavier work with Stone Temple Pilots. Finally, the two-song conclusion, “Turnpike”, an impressive bass solo that bleeds directly into “California Lane Change”, bringing Yippee F’in Hurray to a blistering close.

With two records under their belt, The Cocktails are, without a doubt, one of the most unique and thrilling up and coming punk bands I’ve heard in quite some time.  Capturing the visceral energy of their live show, Yipee F’in Hurray is a hard-hitting record with an abundance of energy and attitude and stemming from a rich curation of influences, ultimately giving The Cocktails a sound that separates them from their contemporaries.