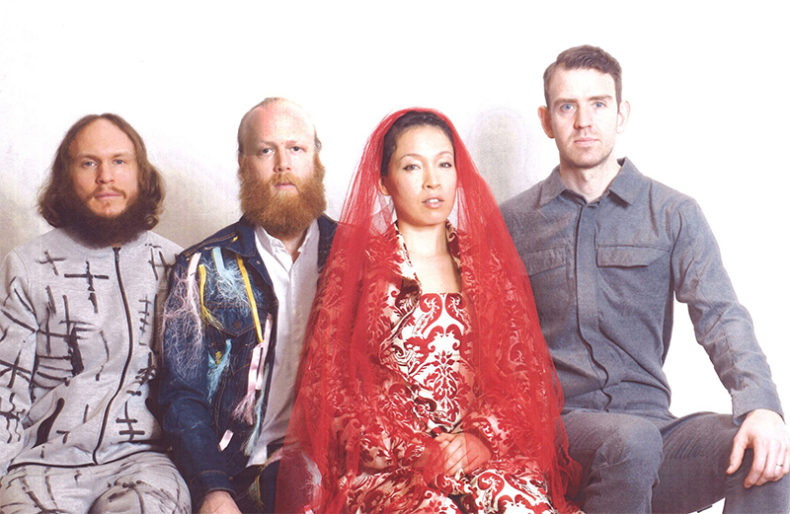 Grammy-nominated Swedish electronic group, Little Dragon, recently released their latest album Season High on April 14th with Loma Vista Records. This is their 5th studio album. As stated by Yukimi, “We want to exist in our own bubble where we can stay curious about sounds. The magic feeling that sounds can sprinkle over any boring day is what got us all hooked.” These feelings were transmitted by the band at the Danforth Hall on the rainy night of May 4th. And yes, galactic spatial sounds were certainly present.

Little Dragon, consisting of Yukimi Nagano on vocals and percussion (and a rocking glow in the dark polka dot dress), Erik Bodin on drums, Fredrik Källgren Wallin on bass, and Håkan Wirenstrand on keyboards, delivered a high-energy performance to their fans. This sold out show got the audience dancing along with Yukimi’s kooky dance moves; in awe of her jumps and strides across the stage.

Big Little Dragon fan Sarai recounted, “the entire show was like an outer body experience and that was totally a product of Yukimi’s energy and presence. It kind of felt like she was alone dancing in her room in the sense that she was free and uninhibited but totally drew in the crowd and had us all grooving with her. I was really impressed with her stage presence, voice and energy – also, her outfit changes kept things fresh and fluorescent! She reminded me of Bjork up there with her eccentric moves, sort of ethereal and from another realm.”

Little Dragon’s song “Sweet” delivered a candy-for-all-eyes light show in all shapes and colours. The disco ball lights and hanging 70’s décor did not disappoint. Rainbow lights covered the venue, while worldly rhythms and beats were accentuated by Yukimi’s drum pad; she made dual use of her stick as a magic dancing wand. The thick basslines shook up the Danforth, bringing people’s energies way up before transitioning into smoother and more mellow repertoire.

“The energy of the room seamlessly shifted between trance and rhythm and the show left little to be desired,” commented Shay. “As a photographer – the glowing costumes, multidimensional lighting and floor-to-ceiling reflective décor really stole the show – creating an outer world ambience and many visual layers to match the rhythms and beats of this talented band! It is clear they put a lot of thought into this show, ending on a high note – the encore demanded undivided attention from the audience, it was phenomenal! As this is a band that often frequents my playlists, I would surely see them again!”

Originally from Toronto, Giselle is exploring the worlds of entertainment and social change through a musician's lens. With a background in Environmental Studies and Music Business, she works to establish her own voice in the music scene.
RELATED ARTICLES
little dragonlive reviewloma vista records