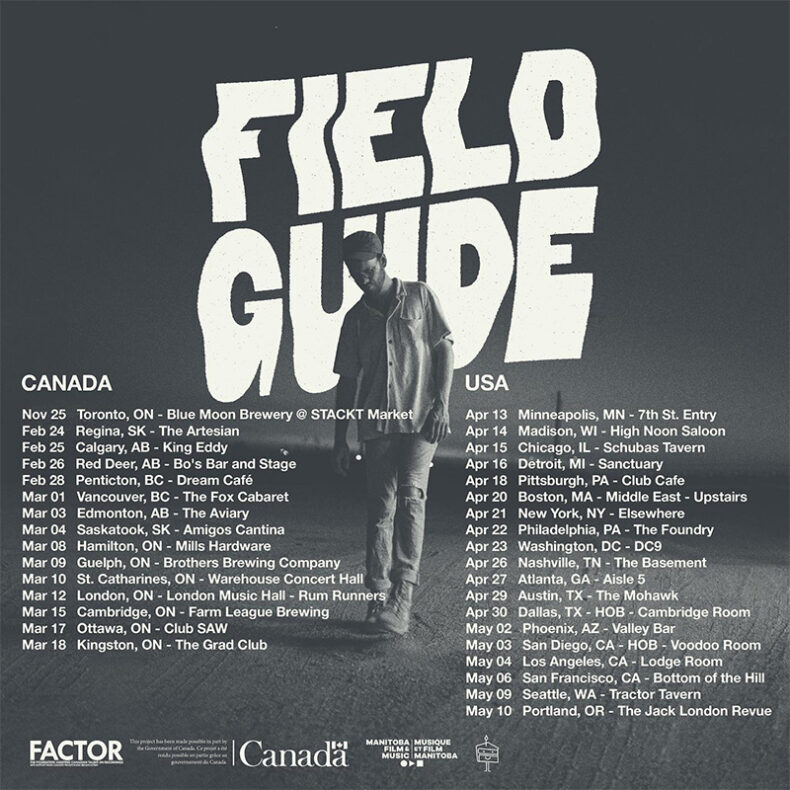 Right on the tail of the release of his sophomore LP via Birthday Cake Records, Field Guide (the musical moniker of Dylan MacDonald) is announcing a full headlining run of tour dates that criss-crosses North America beginning February 24, 2023. Full tour dates can be found below and tickets can be purchased HERE.

“After a month of solo touring in Europe it was a treat to get the band together to record a live version of ‘Worst of Ways’ and two new-album staples from my solo set (“For Sure” and “You Could Be Free”) with BnB at No Fun Studios at home in Winnipeg,” says MacDonald. “I’m very excited to be hitting the road next year all over Canada and the US for my debut headline tour!”

Field Guide is a weaver of worlds. Built around his inviting voice and wrapped in warm textures, his self-titled sophomore full-length builds his most engaging world yet. The album lives in a place between darkness and hopefulness with unshakeable melodies at its heart. “Melody is what makes words fall out of my mouth,” MacDonald says. “It’s disarming. When I find a melody that represents my internal world, I drop my guard. I allow the words to appear out of thin air without judgement. A lot of these songs came to life that way. I wasn’t trying to make anything, but the songs became a home for words that I wasn’t yet ready to write on the page.”

The past few years haven’t allowed for much escape from our interior worlds. There’s been a lot to move through, and many things can be true at once. This album lives at the sometimes-tense intersection of those truths – loving someone dearly while being pulled toward something new, feeling joy in the melancholy, a gratitude for deep friendship and an uncertainty of one’s place in it.

The album is also alive with the people and places that surrounded its creation. Vocals and acoustic guitars were recorded near Riding Mountain National Park in a woodstove-heated cabin during one of Manitoba’s coldest winters in years. Bass and drums were tracked at Breakglass Studios in Montreal, a room that already felt familiar from falling in love with the records of tour-mate Leif Vollebekk. Final overdubbing took place at Monarch Studios in Vancouver surrounded by trusted engineers and friends. And constant inspiration was found in his circle of Winnipeg creators working away on their own projects. Like The Big Pink house – Boy Golden, Slow Spirit, Roman Clarke, Kris Ulrich, and others dropped in on each other to share demos and often lend their sounds to each other’s albums.

Beyond his hometown, Field Guide has had the opportunity to meet some heroes and new friends. He’s supported Leif Vollebekk, Bahamas, SYML, Wild Rivers, JP Saxe, and Penny & Sparrow on their tours this year. He’s built a legion of fans online and on the road. So, while this is a solo album that invites the listener inside Field Guide’s inner monologue world, it really is meant to be lived in together. “These are the truest, rawest songs that I’ve ever written. I’ve never felt so sure about something I’ve made before. And now, it’s yours.”

SPILL NEWS strives to keep our readers up to date with news and events in the music industry. We keep you informed of the most recent information regarding new releases, tour dates, and information items about your favourite artists.
RELATED ARTICLES
birthday cake recordsdylan macdonaldfield guide

by SPILL NEW MUSIC on September 21, 2022
FIELD GUIDE SHARES “YOU COULD BE FREE” FROM UPCOMING SELF-TITLED LP BIRTHDAY CAKE RECORDS “It’s tough to see your own struggles affect someone you love—watching them take on your heaviness can really bring on a feeling of guilt,” [...]