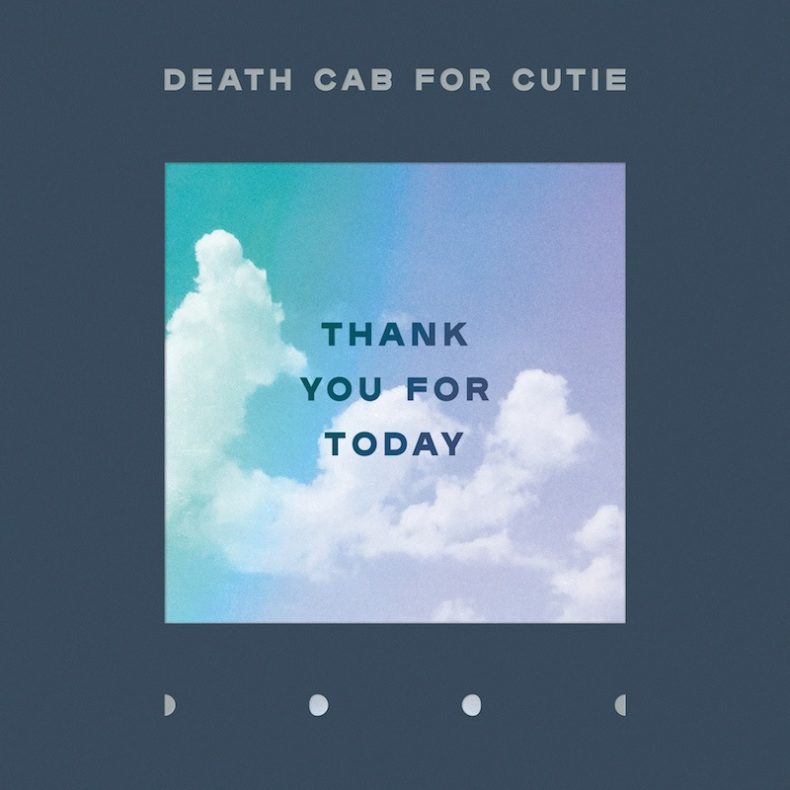 Atlantic Records’ Death Cab for Cutie has officially announced the release of their upcoming ninth studio album. Thank You for Today arrives everywhere on Friday, August 17.

Thank You for Today is available for pre-order now at all DSPs and streaming service. All digital pre-orders are joined by an instant grat download of the first single, “Gold Rush,” now available. “Gold Rush” also comes accompanied by an official music video, directed by Alex Southam (alt-J, Mumford & Sons). The visual features Ben Gibbard performing the song amidst an increasingly crowded cityscape. Death Cab for Cutie will make their debut performance of “Gold Rush” on CBS’ THE LATE SHOW WITH STEPHEN COLBERT Thursday, June 21st; check local listings.

The highly anticipated new album was first teased in May with the release of a short clip to the band’s social channels. Today’s pre-order and single release arrive on the heels of another teaser unveiled last week, again featuring a track from the album.

Death Cab for Cutie will celebrate their new album with a much anticipated fall tour. The dates – which see the eight time GRAMMY® Award-nominated band playing intimate venues and theatres across North America – begin September 24 at Eugene, Oregon’s Hult Center for the Performing Arts and travel through mid-October. Due to popular demand, second shows have already been added in Philadelphia and Boston. Tickets for these two dates are now on sale.

One dollar from each ticket purchased through the band’s website will go towards The Aurora Commons – a Seattle based non-profit organization which offers a safe space for unhoused neighbors to rest, prepare a meal, connect to resources, and collectively create a healthy and vibrant community. Support on most dates comes from Charly Bliss; Cold War Kids will support on September 27.

Death Cab for Cutie was born in 1997 when Western Washington University engineering student and budding guitarist-songwriter Benjamin Gibbard first united with guitarist-keyboardist-producer Chris Walla and bassist Nick Harmer to record a demo cassette dubbed You Can Play These Songs With Chords. Though Gibbard had initially conceived the tape as a solo project, the eight-song cassette proved both popular and aesthetically successful, prompting him to reconfigure Death Cab for Cutie as a full band. Death Cab for Cutie made their official live debut on November 22 that same year, a performance recently uncovered and released as First Show, Acoustic At The Pacer House, Bellingham Wa. 11​/​22​/​97, available now exclusively via Bandcamp; downloads begin at $4 with all of the band’s proceeds benefitting Seattle’s The Aurora Commons.

Immediately hailed as one of indie rock’s most compelling and creative collectives, Death Cab for Cutie’s milestone debut album, Something About Airplanes, arrived in 1998 via the Seattle-based independent label, Barsuk. The band enjoyed a long relationship with Barsuk before making their Atlantic Records debut with 2005’s fifth studio release, Plans. The album proved the band’s popular breakthrough, earning RIAA platinum certification as well as spawning the chart-topping singles, “Soul Meets Body” and “I Will Follow You Into The Dark.”  The latter track was honored with a GRAMMY® nomination as “Best Pop Performance By Duo Or Group With Vocals,” with Plans receiving the nod as “Best Alternative Album.”  Directions, the 2006 DVD companion to Plans earned an additional GRAMMY® nod as “Best Longform Music Video.”

Now fully affirmed as an era-defining band, Death Cab for Cutie made a stunning #1 debut atop the SoundScan/Billboard 200 with 2008’s RIAA gold certified Narrow Stairs. More critical acclaim and two further GRAMMY® nominations followed, including nods for “Best Alternative Album” and “Best Rock Song” (honoring the hit single, “I Will Possess Your Heart”). THE Open Door EP was released in 2009, earning DCFC a third consecutive GRAMMY® Award nomination for “Best Alternative Album.” Codes And Keys arrived in 2011 and made a top 3 entry on the SoundScan/Billboard 200 before receiving the band’s fourth straight GRAMMY® nomination for “Best Alternative Music Album.”  “You Are A Tourist,” the album’s first single, also proved a multi-format radio smash, reaching #1 at both Triple A and Modern Rock outlets nationwide – Death Cab for Cutie’s first-ever #1 at the latter format.

Death Cab for Cutie’s eighth studio album, Kintsugi made a remarkable chart debut upon its March 2015 release, debuting at #1 on Billboard’s “Top Alternative Albums” and “Top Rock Albums” charts, as well as #8 on the overall SoundScan/Billboard 200. Hailed by Magnet as perhaps “the best record of (Death Cab for Cuties’s) 17-year career,” the album was honored with a “Best Rock Album” nomination for the 58th Annual GRAMMY® Awards – the iconic band’s eighth overall nod.

ADDITIONAL DATES TO BE ANNOUNCED

Thank You For Today Tracklisting

by Aaron Badgley on February 18, 2022
VARIOUS ARTISTS OCEAN CHILD: THE SONGS OF YOKO ONO WARNER MUSIC Tribute albums by multiple artists are always a tricky thing. Tricky because you have many different styles interpreting one artist’s work. Sometimes this works really well, such as [...]

by Mariko Margetson on September 5, 2019
DEATH CAB FOR CUTIE @ MALKIN BOWL, VANCOUVER SEPTEMBER 5, 2019 Vancouver audiences are a curious species. They often congregate in groups that prefer to keep their cards close to their chest, and as a result some of them have earned a reputation [...]
7.0

by Gabrielle Mueller on August 17, 2018
Death Cab for Cutie Thank You For Today Warner Music Into their second decade of making music, Death Cab for Cutie’s Thank You for Today is a testament to a band whose career boasts a vast catalogue of poetic lyrics mixed with sun spotted and [...]