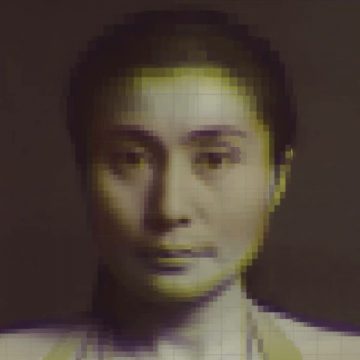 Tribute albums by multiple artists are always a tricky thing. Tricky because you have many different styles interpreting one artist’s work. Sometimes this works really well, such as I Am Your Fan tribute to Leonard Cohen. Other times, not so much, such as Come Together: America Salutes The Beatles. But, on Ocean Child: The Songs Of Yoko Ono it works because some of the artists have worked directly with Ono in the past, and because her music is certainly open for interpretation. Ocean Child: The Songs Of Yoko Ono is not the first tribute album to Ono. John Lennon was in the process of putting together the first one in 1980. That album, Every Man Has A Woman (1981) was eventually completed by Harry Nilsson and stands as the standard to measure tributes to Ono. Ocean Child: The Songs Of Yoko Ono is every bit as good as that album.

Yoko Ono has always been ahead of her time. This is reflected in her music and her art. For these artists to cover Ono makes good sense. This album was assembled by Death Cab For Cutie’s Ben Gibbard and he has brought together a very diverse crew. And for the most part, the artists focus on Ono’s more conventional songs. The songs chosen demonstrate Ono’s ability to write remarkably moving and touching melodies combined with heartfelt lyrics. Listen to David Byrne and Yo Le Tango’s take on “Who Has Seen The Wind?” It is painfully beautiful and brings out the wonderful spirit of the song. The same can be said for Sharon Van Etten’s version of “Toyboat”.

Other artists bring out the more experimental side of Ono. Deerhoof twists “No No No” around a bit and turns it into a frightening experience. Whereas Ono’s original version is quite sad, this one is hyperactive and scary, whereas Thao turns “Yellow Girl” into a minimalistic, chantlike song. Japanese Breakfast strip “Nobody Sees Me Like You Do” down to its bare bones. The sparse arrangement transforms a love song into a lament. It is beautiful.

Death Cab For Cutie has fun with “Waiting For The Sunrise” and The Flaming Lips make “Mrs. Lennon” their own. A few of the versions don’t work quite as well, such as U.S. Girls’ version of “Born In A Prison”. It isn’t bad, but in not wanting to duplicate it, their version lacks the power of the original. The same can be said about Amber Coffman’s “Run Run Run” which loses all its energy. However, they are still enjoyable and their contribution here is welcome.

It has been said a great many times, but it is time to discover the incredible talent of Yoko Ono and the impact she had on music, especially in the “alternative” world. The film Get Back has shown that Ono was not the villain that has been portrayed in the past, and Ocean Child: The Songs Of Yoko Ono demonstrates that Lennon was right, she is a musical genius. My hope is that the fans of these artists will listen to the originals and Ono will finally get the recognition she so rightly deserves.

Born and raised in Whitby, Aaron discovered music through his love of The Beatles. This led to a career in radio, writing for various publications, and ultimately a radio show about The Beatles (Beatles Universe), which ran for over four years. When not immersed in music, Aaron enjoys spending time with the loves of his life -- his wife Andrea, and daughters Emily and Linda (all of whom have an intense love of music too).
RELATED ARTICLES
album reviewalbum reviewsdavid byrne
8.0