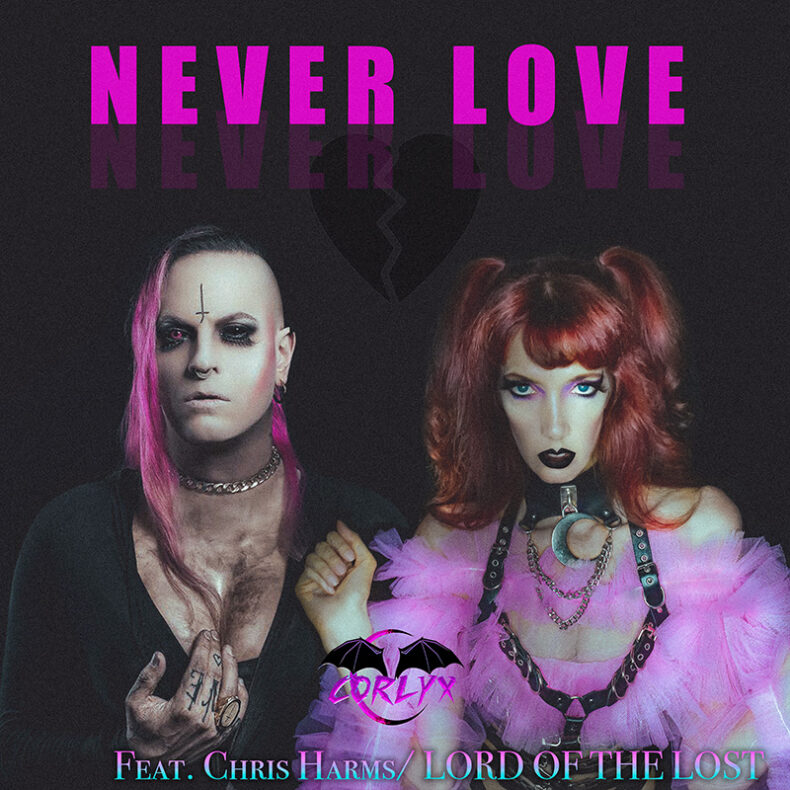 The darkwave post-punk duo presents their fourth single, “Never Love”. The new song is a collab for the broken hearts feat. Chris Harms/ Lord Of The Lost and was released October 5, 2022, via Out Of Line Music.

Caitlin Stokes from Corlyx says about the collab and the song, “Chris Harms put out a call to artists who wanted to collaborate with him, and we had an unfinished production that was very different from our usual sound. It’s a bit Dark Pop with some heavy elements, and we thought what a great opportunity to explore another side of ourselves and what Chris delivered vocally did not disappoint. There’s such a contrast to our vocal styles; a beautiful conversation is happening in this track, “Never Love” is that I love you, I hate you song you wanna make bad decisions to.”

Corlyx is Caitlin Stokes and Brandon Ashley, initially formed in Los Angeles until the duo set out for Berlin. Now living in Brighton, U.K., Corlyx adds a live bassist to their lineup and explores the realms of darkwave/post-punk with a modern production. “We are so excited for the new record coming out in 2022 and the amazing opportunity we have been given to join the Out Of Line family. Follow us on @corlyx_official for updates!” ~Corlyx

The upcoming Corlyx album “Blood In The Disco” is scheduled for a winter release.

by SPILL NEW MUSIC on March 20, 2022
CORLYX – “RAINDROPS” (FT. MASSIVE EGO) OUT OF LINE MUSIC The darkwave post-punk duo Corlyx present their exciting third single accompanied by a music video for the new song “Raindrops”. The song is very emotional as [...]

by SPILL NEW MUSIC on December 17, 2021
CORLYX SHARE NEW SINGLE + VIDEO “TAKE OFF EVERYTHING” TAKEN FROM THE ALBUM BLOOD IN THE DISCO OUT OF LINE MUSIC Today, the darkwave post-punk duo Corlyx released a new single and video for the new song “Take Off [...]