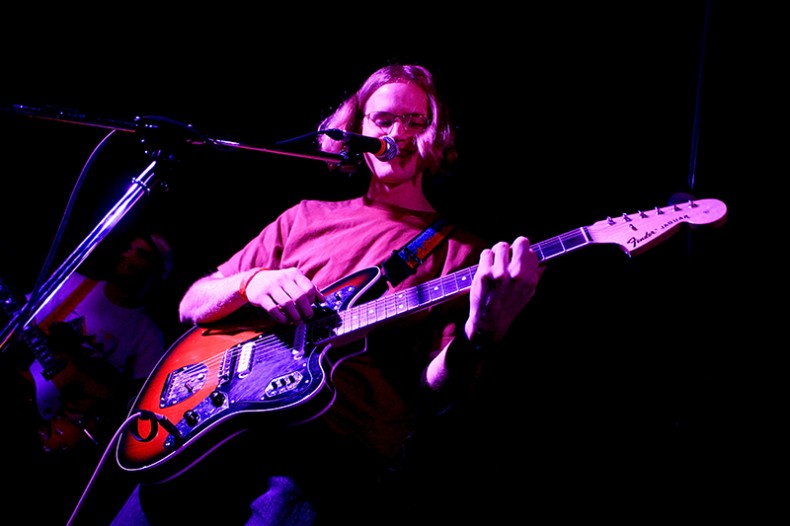 The Garrison is a great venue for soft, airy music. Typically the crowd and performers have an understanding regarding volume, and those who don’t hang out in the separate area in the front. Thursday’s Nap Eyes show was no different; people were talking during and in between sets, but not shouting, dancing or laughing, only absorbing.

The night began with Toronto’s Century Palm, who proved to be a fun (but perhaps ill-fitting) opening act. Century Palm’s music was certainly the most energetic of the night. The self-proclaimed retro-futurists filled the room with surfy guitars, often atonal vocals and moody basslines. The rhythm section is by far the best part of the band, and where drummer Jesse Locke was not the liveliest performer, his drumming was dynamic and humble, but flashy when it mattered. Seriously, watching this guy was like watching Whiplash without J.K. Simmons yelling at you for two hours. Maybe that’s why Locke was so good, J.K. Simmons yelled at him for a few years. Maybe more drummers need to undergo the same kind of verbal abuse.

Next up was Cian Nugent, and of course someone makes a Ted Nugent joke as soon as he introduces himself. I’m surprised this guy hasn’t lived out his own version of Bill Hicks vs. the “Freebird” heckler. Anyway, Cian Nugent plays ‘70s AM radio rock. It’s soft and sweet and could make James Taylor weep. But Nugent is not without his chops, and as the set progressed, he treated the audience to more and more samples of guitar hero theatrics, carefully placed in the cavities of his songs. All of this was fantastic until the end of the set, when Nugent brought Brad Loughead of Nap Eyes onto the stage, and the band subjected the audience to 10 rambling minutes of bells, shakers and chromatic riffs.

When Nap Eyes took the stage, they did so in unassuming fashion, jumping right into “Mixer,” commanding the attention of the room. Frontman Nigel Chapman is a sight to behold; tall, lanky, long blonde hair tucked behind his ears and large coke bottle glasses. Chapman has the look and presence of a guy who’s been volunteering at an animal shelter for 25 years, someone who always packs his own lunch (tuna salad sandwich), knows the names of all the staff and animals, and always reads Patricia Cornwell novels on his breaks. Chapman is a warm, old soul that’s in on something much bigger and simpler that the rest of us find difficult to stop and enjoy. When he sings about thinking about “(his) Jesus and meditation,” he sounds like a guy at peace, happy to leave the party and go back to his Cornwells.

Throughout Nap Eyes’ short but satisfying set, Chapman rarely looked up from his mic, never raising his voice, but effortlessly gleaming with confidence and sincerity. Even on more upbeat songs like “Roll it” Chapman would only sway slightly. It was all part of the beauty of watching Nap Eyes; they were happy just to be there playing their song for no one but themselves. Near the end of the night, Chapman took a moment to thank the bands and the audience, followed by what could be Nap Eyes’ mission statement: “it’s also fun to be in a rock band.”

Marko Woloshyn is a Mississauga-based writer and musician. He owns a limited edition repressing of Mclusky Do Dallas and one time at a concert a drunk woman told him he looked like Keira Knightley.
RELATED ARTICLES
century palmlive reviewthe garrison

by Emily Nutson on September 6, 2017
Cindy Wilson @ Lee’s Palace, Toronto September 6, 2017 Cindy Wilson, founding member of the iconic B-52s, is writing and performing new music once again in the form of tracks from her latest solo work, Change. Change, a full-length CD that [...]