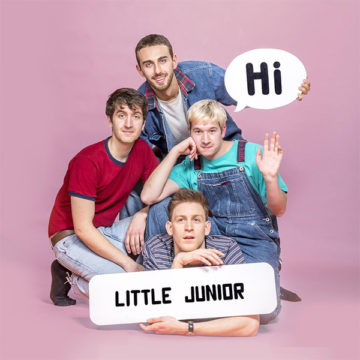 While it has yet to be two decades since the start of the century many are already nostalgic for the early oughts. On their debut album, Hi, Toronto’s Little Junior reign in this nostalgia to create an album packed with sentimental vibes and modern laments.

From the album’s opener, “Denial,” through a majority of Hi, Little Junior combine their perspectives as modern 20-somethings with big guitars and raucous drums to produce songs that are both well composed and cleverly worded. Most of the album sounds like it would be right at home on a 2000’s teen movie soundtrack stacked with the likes of Weezer and the Pixies. Lyrically, Hi can be disparaging at times as frontman Rane Elliott-Armstrong recounts everything from experiences with homophobia to the struggles of seeing others unwarrantedly succeed. These often sardonic songs about those who have wronged him allow for moments of genuine expression and make Hi both a relatable and interesting listen. One of the album’s least deprecatory tracks, “Crooked Tooth,” is a surprisingly charming love song that Rane wrote for his boyfriend.

I am an Edmonton based musicophile and photographer who loves experiencing music whether it's live or on my turntable. I play seven instruments and go to a lot of concerts.
RELATED ARTICLES
album reviewsgrand jury records
8.0