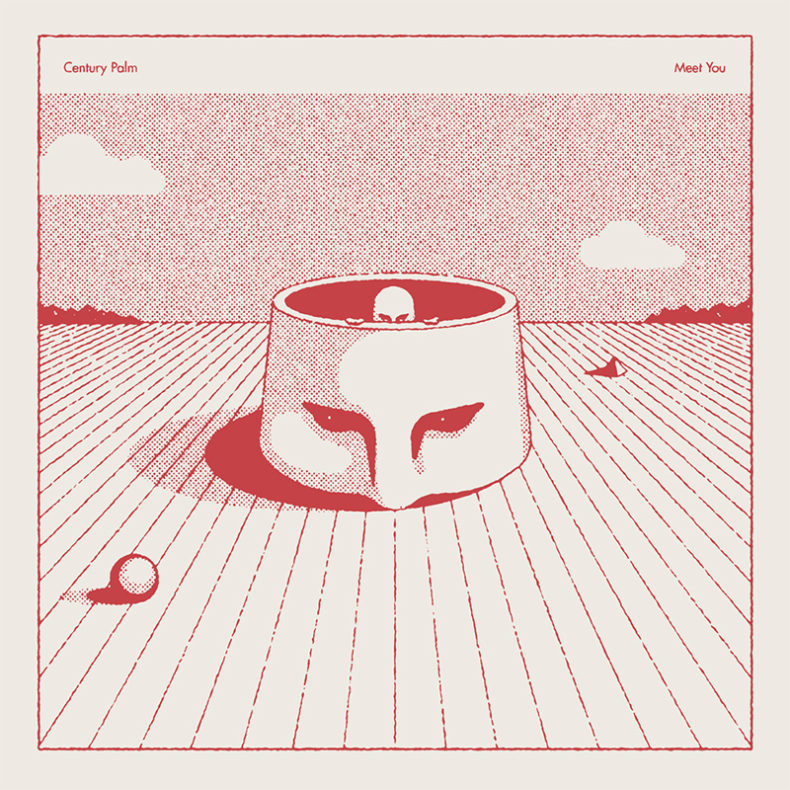 The track appears on their forthcoming debut LP, Meet You, which is due out on Deranged on March 10th, and contrasts with the synth-driven new wave of the album’s first single to display a different side of the band’s sound, delivering driving, psych-inflected post-punk reminiscent of NEU!, Faust and Stereolab.
The song concerns singer Andrew Payne’s experience with the death of a close friend shortly after the 2013 Calgary flood. As he told CoS:

“‘Then You’re Gone’ is about the passing of my friend Scott Luit, who lived in Calgary. In 2013, I made a 4-day stopover there to play Sled Island with Ketamines and Zebrassieres. Scott and I had plans to meet up, but unfortunately a wide-scale flood was in its early phases. Heavy rain caused Calgary’s rivers to overflow and most of downtown was evacuated. The rest of Sled Island was cancelled, large parts of the city were cut off from electricity and traveling around Calgary wasn’t recommended, or even possible in some parts.

“Because of the flood we had to cancel our plans, thinking we’d see each other next year. Not long afterwards, Scott suddenly passed away, and “Then You’re Gone” is about that shocking moment when I realized I wouldn’t be able to see or talk to my friend again. You can’t always assume there will be a next time.”

Century Palm was initially formed by vocalist/guitarist Andrew Payne in 2014 following the dissolution of Ketamines, a cult favourite garage-pop band founded by bassist Paul Lawton that featured 3/4ths of the eventual members of Century Palm (Lawton, Payne, Penny Clark & Jesse Locke) in one or other of its various iterations. Comprised of long time fixtures of the Vancouver and Calgary music scenes, with members playing in bands like Tough Age, Zebrassieres and Dirty Beaches, the group reconnected in Toronto after independently relocating to the city, and quickly began to capture the interest of local audiences, appearing on bills with bands from the thriving local post-punk scene like Casper Skulls, Fake Palms and Vallens, and touring acts like Nap Eyes and Ultimate Painting.

Following a self-released cassette EP and a pair of early singles the band attracted the attention of Deranged Records (White Lung, Tenement, Pleasure Leftists et al), who released the band’s “Valley Cyan” 7 inch in late 2015, and then set to work on an LP for the label in sessions that would eventually become Meet You. It was recorded over approximately 6 months, with Lawton acting as engineer, before being mixed by Vancouver musician Jay Arner and mastered by Mikey Young of Total Control, and according to Payne, the band workshopped the songs relentlessly, cycling through different arrangements and feels without a clear notion of a fixed end point.

“We wanted to take our time on it and we did a lot of experimenting,” he says, “it was very open-ended, and we re-tracked some of the songs multiple times, which I think is an element of our process that had a really positive impact on the end result.”

The album reflects the time spent, engaging with a wide range of compositional concepts and sonic ideas while remaining anchored by a clearly realized aesthetic, exploring, over its ten tracks, the driving rhythms of Krautrock acts like NEU! and Can, the expansive guitar work of Televisions and Wire, and lighting on the nostalgia-tinged New Wave of Psychedelic Furs and OMD, as filtered through the foreboding atmospherics of Gary Numan and Siouxie & The Banshees.

Payne describes the record as being about “getting to know another layer of yourself,” and says that it in part concerns his return to playing in a band after becoming disenchanted with making music.

“The album is about the subtle tones of despair that arise just from existing: the loss of friends, relationships, your past self, and the difference between what you wish you were doing and what you are doing,” he says. “You think you know yourself but as you get older you realize more and more what you are really like and what you really want to do. In my relationship to making music I think I stopped doing it because I was trying to be a grown up. There’s almost this pressure as you get older that making art is somehow childish, and this band and this record was the byproduct of me realizing in my own life that that is not the case. In a sense the album is, both thematically and by existing at all, a repudiation of that idea.”

Pre-Order Meet You Via Deranged Records Or

by Emily Nutson on September 6, 2017
Cindy Wilson @ Lee’s Palace, Toronto September 6, 2017 Cindy Wilson, founding member of the iconic B-52s, is writing and performing new music once again in the form of tracks from her latest solo work, Change. Change, a full-length CD that [...]