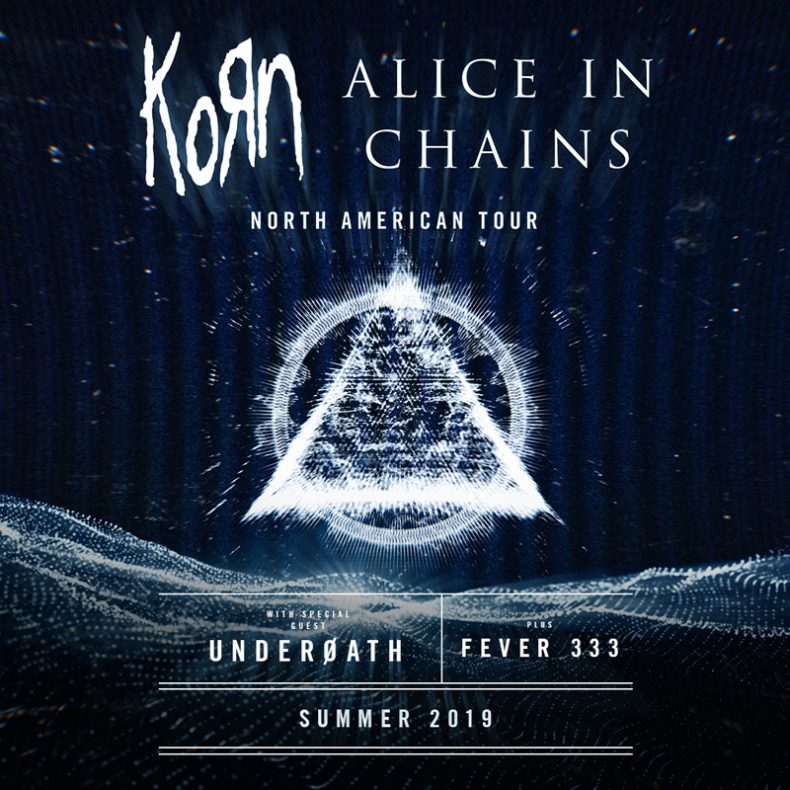 In a rather unexpected turn of events, Alice In Chains and Korn have united for a double-headlining expansive North American tour. It kicked off in mid-July and runs until early September, making its sole Canadian stop tonight at Toronto’s Budweiser Stage. Along with show openers H09909 and Underoath, it made for a truly epic night of ‘90s nostalgia from two of the biggest bands still standing, touring, and releasing music from that decade.

Alice In Chains have been busy touring in support of their incredible 2018 record, Rainier Fog, and have recently released their Black Antenna series. Having seen them now three times in just over the last year, I can safely say the band is at the top of their game since reforming in 2007, and are embarking on a truly exciting and innovative path as they move forward. It was no surprise that their set reaffirmed the high bar which they have recently set. Opening with “Angry Chair” which was followed immediately by “Man In The Box”, Alice In Chains kicked off their set with a hard-hitting one-two punch. Their set, running just over an hour, was driven largely by heavier tracks of the likes of “The One You Know”, “Dam That River”, “Would”, “Them Bones”, and the rarely performed, “Last Of My Kind”, among others. A pair of softer tracks, “No Excuses” and “Nutshell” – dedicated to Layne Staley and featuring a guest appearance from Dallas Green on lead vocals – added a well-rounded dimension to the show. The band closed their set with a truly emotional and powerful rendition of the quintessential “Rooster” which managed to steal the show as the audience sang along and waved their phones in the air, magically giving the song a sense of atmosphere.

Korn, on the other hand, are currently in the midst of releasing their first album in three years, with The Nothing dropping on September 13, and have released two singles, “You’ll Never Find Me” and “Cold”, ahead of time. Like ’em or not, Korn are an incredibly tight band. Navigating a set full of tempo, dynamic, pulse, and vibe changes, there was not a hint of a stumble to be found. Their set comprised of material throughout their career, including recent singles and hits such as “Blind”, “Got The Life”, and “Freak On A Leash”. Definite highlights from their performance included how they seamlessly added the bridge of Metallica’s “One” in “Shoots And Ladders” and similarly, when they later added a portion of Queen’s “We Will Rock You” in “Coming Undone”. All in all, it was a strong performance that had the near sold-out show captivated from the moment the curtain dropped at the beginning.

Alice In Chains and Korn’s joint headlining show has proven two things. Firstly, ’90s nostalgia is very much real; however, secondly, these are two bands who simply refuse to rest on nostalgia alone. Where the two bands are so different, it is easy for the two fan bases to argue who should have truly headlined – like a number of the conversations overheard before and after their set, I agreed that Alice In Chains should have – however, that is not the point. Both bands are performing with a level of intensity that is hungry to continue pushing the audience experience and expectations. While it’s needless to say fans of both bands will leave the show beyond thrilled, they will also be excited to see and hear what is to come next from both acts; for Korn, that is the next month, and for Alice In Chains, while unknown, I would guess within the not too distant future.

A passion for music has always been a part of Gerrod’s life. As a young boy, he was raised on a steady diet of the music from The Chili Peppers, Aerosmith, The Stones, Prince, and others from his mum. Raised in the GTA, Gerrod continued to foster his love for music by attending a wide range of concerts and learning the drums. His unapologetic passion for music has no bounds and has spread to a wide variety of styles, whether it be the 90’s rock that sound tracked his teenage years, the jazz he studied in university, or his newfound love for hip-hop. He recently received his bachelors in music and education from York University and is passionate about writing and reviewing good (and less than good) music. Gerrod is also the drummer and songwriter for a Toronto based rock & roll band, One In The Chamber.
RELATED ARTICLES
alice in chainsbudweiser stagekorn