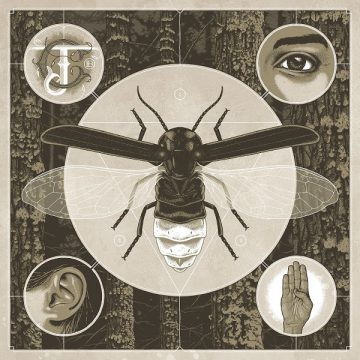 Opening with the initial single released earlier this year, Brighten kicks off on one of its strongest notes. Layered acoustic and electric guitars are accented with the twang of a slide guitar weaving its way through the song, while Cantrell’s signature, distorted wah muddies the waters with a sludgy appearance in the chorus. Far from an odyssey, “Atone” is a beautifully haunted sonic wasteland of dystopic proportions for Cantrell’s songwriting and emotional reflections to sprawl about in a sophisticated and dense manner. With a dark energy to it, giving the song a sense of emotional weight, and Cantrell’s stirring vocals, “Atone” is a masterpiece of songwriting.

As a whole, Brighten is surprisingly and largely free of any riffs. This is perhaps the strongest statement of the stylistic and creative departure that Cantrell had embarked on with the writing of this album. Rather than riffs and solos, the songwriting stands strong at the forefront of the album. Songs like the title track, “Had To Know”, and “Siren Song” stand alone as a reminder to Cantrell’s grunge roots – the latter of which feels reminiscent of Alice In Chains’ “Down In A Hole” – while much of Brighten connects more with a singer-songwriter vibe. The subtleties of just Cantrell and an acoustic guitar on “Black Hearts And Evil Done” is something to behold, while “Nobody Breaks You” and “Dismembered” bring an alternative flare to country. Furthermore, the somber “Goodbye” brings Brighten to a thoughtful and quiet close.

Cantrell shines on his latest solo outing, a record that, while not his debut, feels like a new chapter to his esteemed career. Cantrell sounds revitalized through the creative experiment that Brighten has allotted him with what is perhaps his greatest departure from the worlds of grunge, hard rock, and metal. Trading in riffs for lush melodies and harmonic progressions, Brighten is a reflective album with simple, yet brilliant, songwriting at its core. Despite its stylistic differences from what many would expect from one of the greatest riff makers and solo shredders of the ‘90s, Brighten still manages to feel distinctly that of Cantrell; ultimately allowing his artistry as a songwriter and performer to flex in an excitingly uncharted, yet familiar, fashion.

A passion for music has always been a part of Gerrod’s life. As a young boy, he was raised on a steady diet of the music from The Chili Peppers, Aerosmith, The Stones, Prince, and others from his mum. Raised in the GTA, Gerrod continued to foster his love for music by attending a wide range of concerts and learning the drums. His unapologetic passion for music has no bounds and has spread to a wide variety of styles, whether it be the 90’s rock that sound tracked his teenage years, the jazz he studied in university, or his newfound love for hip-hop. He recently received his bachelors in music and education from York University and is passionate about writing and reviewing good (and less than good) music. Gerrod is also the drummer and songwriter for a Toronto based rock & roll band, One In The Chamber.
RELATED ARTICLES
album reviewalbum reviewsalice in chains
9.0